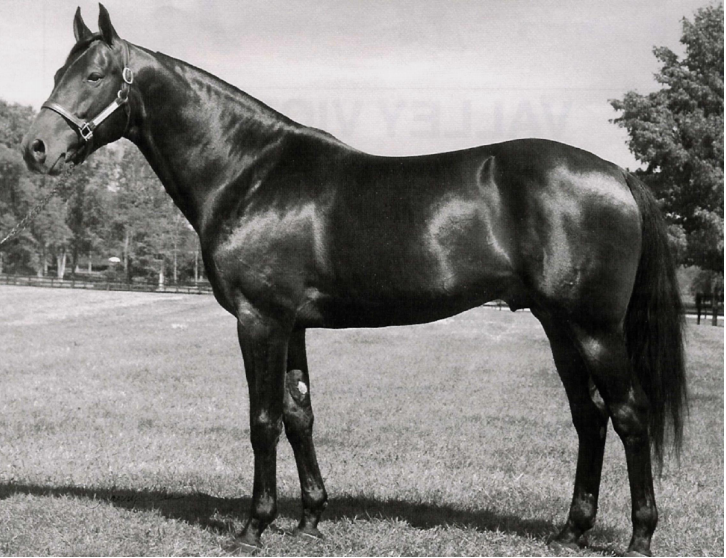 At the 1976 Lexington sales most attention went to Falcon Almahurst who was sold for $150 000. In the same sale, however, the Indianapolitan Keith Bulen picked up an inconspicuous son of Silent Majority, buying the Walnut Hall Farm bred Abercrombie for $9 500. It would turn out to be one of the best deals in harness history.

Bulen initially assigned Jerry Landess to train their new yearling before he was moved to part-time horse trainer and full time school bus driver Cecil Peacock ahead of Abercrombie’s two-year-old season. At two, Abercrombie had a fine season with earnings of $49 379 and a 7-3-3 record in 20 starts. Moreover, he had shown massive promise as he established several records, including being the first 2-year-old to pace a 1:59 mile on a half-mile track and a 1:56 mile on a mile track (done at Delaware, Ohio and Lexington, respectively). During the two-year-old season Bulen also sold part of Abercrombie to Shirley Mitchell of Zionsville.

Abercrombie was winless in several early stakes, however, and moving the horse to trainer Glen Garnsey in mid-September proved key in unleashing the horse’s potential. In his first start for Garnsey, Abercrombie swept both heats of the Ohio Standardbred State at Delaware, winning the second heat in a world record 1:59. In early October he won a division of the International Stallion Stake ahead of Say Hello, generally regarded as the second best two-year-old in 1977 (behind Woodrow Wilson winner No No Yankee).

Part of what Garnsey did was to change racing strategy. «Before he came into my stable, Abercrombie was raced on the front. He seemed to fall asleep during the races. It wasn’t that he lacked the ability to carry his speed, it was just the way he was being driven. He would get the early lead, then start to coast. I started right out racing him from behind, and he improved with each effort. He’s a good gaited, natural pacer, and he should be a real factor in the Triple Crown races» Garnsey said ahead of the three-year-old season. Ahead of the three-year-old season Abercrombie was ranked fourth on the USTA’s Experimental Ratings with 1:54 (behind No No Yankee, Say Hello and Spicy Charlie)

In his 1978 debut, Abercrombie immediately declared his intentions by winning his division of the Kentucky Sires Stakes over Brave Leader and Prince Bret by 17 lengths in 1:57. Making a total of 33 starts as a three-year-old, Abercrombie won 22 of those and set a single-season moneywinning record of $703,260 before being voted Horse of the Year at the end of the season. His wins included the Messenger, the Adios, the Bluegrass, Queen City Pace, and the Prix d’Ete. He finished second in the Meadowlands Pace, fourth in the Cane Pane and was 2-8 in the first two heats of the Little Brown Jug.

He easily beat Speedy Somolli in the Horse of the Year vote. Said Glen Garnsey, «he just might be the most perfect pacer you’ll ever see. He’s just a natural. You’ve got to love him. Now, I’m not saying he’s the greatest ever because I guess there are others who might have been stronger or faster. But none have been more perfect in every way. He just doesn’t make any mistakes.» At Lexington, Falcon Almahurst time-trialled in 1:52.3 while Abercrombie’s time test had to be cancelled because of bad weather. Garney’s assistant trainer Steve Waller later told that Abercrombie was being prepared to beat Steady Star’s 1:52 world record.

As a four-year-old, Abercrombie improved further and paced in 1:53 in the US Pacing Championships at the Big M. When he retired at the end of that season he could look back at 36 wins in 72 starts and $984 391 in career earnings.

He was syndicated in 1979 by Castleton Farm for $3 million and stood his first season at stud the following year for an introductory fee of $7,500. He came one of the better stallions of all times and was the leader of the annual moneywinning sires list four times. He was inducted into the Harness Racing Hall of Fame in 1999. He stood at stud at Castleton Farms, Lexington, Kentucky from 1980 until his death on November 14, 2000. Upon his death he was buried at the farm. According to his trainer Glen Garnsey he really only had one fault, that «he’s a little lazy in training. But, once he gets behind the starting gate he’s ready to go.» Garnsey also credits much of the pacer’s success to the groom Odell Short who in reality trained him as much as Garnsey.