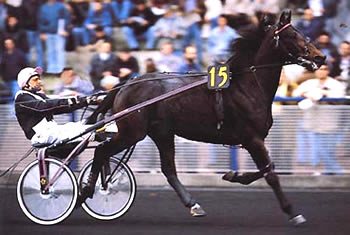 Abo Volo won in his debut in February as a three-year-old and followed up with a second-place finish the next month but the talented youngster picked up a leg injury and did not return to the track until May the following year. It took until that August, in his fifth start of the year, for him to pick up a win. That win launched a run of five consecutive wins, however, as the talented son of Lurabo started to climb his way to the top. Having only made 15 starts by August as a five-year-old, Paul Viel opted to started him in the Criterium des 5 ans in 1993 but he ended out of the money, far behind the winning Avenie de See. Viel kept working on Abo Volo, however, and the horse kept on improving. Three months later he won the group 2 Prix Doynel de Saint-Quentin at Vincennes before winning the Prix de Bretagne a week later.

While most would have opted for the Prix d’Amerique, Viel instead chose to start in the Prix Luxembourg. His new jewel was still green at the top level and, with hindsight, the decision looks correct. Since he was lightly raced and had no stud duty to look forward to, Viel decided to take Abo Volo abroad that spring. Racing around Europe, he won the Grosser Preis von Bayern and was second in both the Oslo Grand Prix and the Elitlopp (both to Copiad). Generally Abo Volo did very well abroad, one of the reasons might be that Paul Viel, conscious of horses’ acute sense of smell, always brought water from his own farm so Abo Volo would have familiar water around him – and hence never had any issue with poor fluid intake.

The rest of the year he enjoyed mixed success, winning the Elite-Rennen in Germany, but ending out of the money in Prix Rene Balliere, Hugo Abergs Memorial and Jubileumspokalen. As the winter meeting commenced, however, Viel had him in good shape and he won the Prix du Bourbonnais. Despite being disqualified in the Prix de Belgique, Abo Volo looked good ahead of the Prix d’Amerique and he finished third behind Ina Scot and Vourasie. He enjoyed a very good 1995 winter meeting as he finished fourth in the Prix de France and third in the Prix de Paris.

He would go on to have a great year overall in 1995. That spring, Paul Viel handed the reigns to Belgian top driver Jos Verbeeck. Winning the Grosser Preis von Bayern in Germany, the only major hiccup came in Oslo where he finished out of the money but was then followed with a third-place in the Elitlopp, second in the Prix Rene Balliere, third in Elite-Rennen then four wins in France including Prix d’Europe and Prix d’Ete. He was disqualified as second in the Prix du Bourbonnais in December but finished third in the Prix de Belgique.

He was one of the favorites for the 1996 Prix d’Amerique but «only» managed a second place behind Coktail Jet but then went on to win the Prix de Paris. He would have a very impressive year as he finished all 17 starts in the top-three, going 10-5-2. He failed to win the Prix Rene Balliere, again finishing second, and in the Åby Stora Pris he finished third behind Zoogin and His Majesty. He rounded off the year winning the Prix de Bretagne and Prix de Bourgogne and was the clear favorite for the Prix d’Amerique. In the Prix d’Amerique, Abo Volo went straight to the lead and stayed there the whole way, winning by one length ahead of Capitole. The win was also very welcome for Paul Viel’s father Albert who could celebrate the win before he passed away from cancer just a few weeks later. It was also a welcome return to the Prix d’Amerique winners’ circle for the Viel family. Paul Viel’s grandfather, also named Paul Viel, had won the 1923 Prix d’Amerique with Passeport. Abo Volo needed a lot of urging from Verbeeck, though, and at 9, his age now slowly started to take its toll. Abo Volo was not dominant anymore and could only manage a third place finish in the Prix de France and fifth place in the Prix de Paris. In fact, he only won two more races in 1997, winning the Prix des Ducs de Normandie and Grand Prix du Nord, both in Caen. In 1998 he finished out of the money in both the Prix de Belgique and the Prix d’Amerique. He was retired after 103 starts, and could then look back at a 39-17-18 record and career earnings of 2 971 520 euros.

Abo Volo was almost sterile and only had 30 foals, thus he was not able to replicate his success at stud. He died in 2007, at the age of 19, of a heart attack.