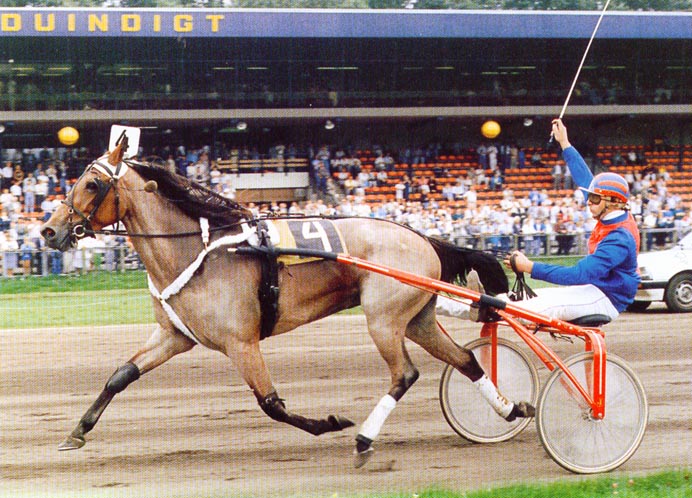 When Joop Schoonderwoerd decided to sell all of his broodmares, foals and yearlings at a dispersal sale in October 1982, dairy farmers Eelke Kruis and Evert Gaastra were at first unsuccessful in their bids for several mares. On a whim they made a lowball offer of 4000 guilders (less than 2000 euros/2200 usd) for Miss Dartel, a rather unspectacular trotter with a 1:20/2:08.4 record. They were surprised when they realized the offer was enough to secure the broodmare, but the low asking price also brought doubts. If nobody else saw anything in the mare, was there anything there?

On June 1 the following year (1983), Miss Dartel gave birth to a filly. At first the foal was registered as «light brown» but it soon apparent that she had the colors of her sire, the US-born roan Gallant Prince. A $45000 yearling, Gallant Prince had won the 1970 Tompkins Memorial and Matron Stakes for Stanley Dancer, though he was still fully at the level of the very best in the crop such as Timothy T, Formal Notice, Speedy Spin and Flower Child. Gallant Prince was subsequently imported to the Netherlands by Joop Schoonderwoerd. There he became a good stallion, a good filly producer but he also had a reputation for producing difficult foals. The filly, soon named Action Skoatter, fully lived up to the billing of being difficult. When they first hitched her to a sulky the headstrong filly responded by laying down and refusing to get up. They knew she could trot, though, as she would do nothing but trot – and trot fast – when alone in the field. With a bit of determination Kruis managed to rid the roan filly of the habit of laying down. She was then put in the training of young Appie Bosscha. Bosscha was from a trotting family and had previously worked with Hendrik Pol and Tjitse Smeding for several years. He then went part-time into the cattle trade and dairy business and came in contact with Eelke Kruis. He trained the horses but also drove the cattle trailer to the market and occasionally milked the cows. Appie didn’t have his license at the time, so Action Skoatter was formally trained by Tjitse Smeding as a 2-year-old and then by Appie’s brother Fedde Bosscha for a few years.

Action Skoatter made her debut in August as a 2-year-old. In 8 starts at two the filly recorded four wins and three third-place finishes. She showed tremendous speed and lowered the record for Dutch fillies to 1.17,7, reducing Totem Volita’s old record by two-tenths of a second. As a 3-year-old she firmly established herself as undisputed queen of the Dutch crop as she recorded 17-2-1 in 22 starts. One race at 3 where she did not do well was the Dutch Derby, contested over the longer distance of 2600 meters (1 10/16 mile), a distance not suited to the filly. She was totally superior over shorter distances, however. Later that year she would set a Dutch record with 1.15,1/2:00.4 and would start a run of wins that would not end until she had 17 consecutive wins.

As a 4-year-old she took her dominance to new heights, winning 19 times in 21 starts and setting Dutch and numerous track and race records in the process. Her biggest win of the year would not come on Dutch soil, however, but in the German race Greyhound-Rennen for 4-year-olds in Mönchengladbach. She would for the first time meet the German star Every Way. He had won the European Championship for 3-year-olds the previous year and was pretty much considered unbeatable. Action Skoatter had an enormous burst of speed and could, however, leave tremendously fast. In Greyhound-Rennen she used that to the fullest and easily took the lead. This forced Wim Paal to send Every Way forward early, but Bosscha had no intention in relinquishing the lead. Paal assumed his horse was good enough to win, anyway but despite pushing the Dutch filly throughout the race, Every Way simply couldn’t inch his way past the roan speed sensation. As the German trotter showed signs of fading slightly down the final stretch, Bosscha celebrated passionately in the bike. The win in 1.15,5/2:01.2f over 2100 meters equaled the track record. A large group of fans had taken the trip from the Netherlands and returned not only high on the win but also with considerable money as a result of Action Skoatter paying good money – almost all German money had been on Every Way, thus forcing the odds on the filly up. Alvin Schockemöhle, the owner of Every Way, responded by immediately puting in a bid for Action Skoatter, rumored to be in the region of 700 000 Dutch guilders (€317 646), which was immediately rejected. The German trotting press focused on the colors, calling Action Skoatter the modern Greyhound who broke the invincibility spell of Every Way.

The Greyhound-Rennen was not the only highlight of that very impressive season. Despite being the only 4-year-old in the race, the Dutch Championship was also easily won by the filly. For good measure, and to fully underscore her dominance, she lowered the race record by two full seconds in the process, winning in 16:2/2:02.3 over 2600 meters (1 10/16 mile). Later that year, in September, Action Skoatter would lower the record for fastest mile in Holland by winning the Sprintkampioenschap (Sprint Championship) in Hilversum in 13:5/1:58.1. In October she was back at Hilversum where she won her elimination to the Prijs der Giganten. Her fans, who had filled 30 busses from Northern Netherlands, saw Grades Singing, possibly the best older filly in the world at the time, winning by a length over the filly they affectionately knew as «Us Action».

Every horse has a nickname or two, and Action Skoatter was no different. Hailing from the Friesland province of the Netherlands, she was probably most commonly referred to as «de Vliegende Friezin», the Flying Frisian. But with Friesland being the only one of the Dutch provinces to have its own language, she also had a name in the Frysk language, namely «Us Action» which means «Our Action». However, in Scandinavia she had another nickname: The Flying Dutchman. That was, however, never a nickname given to her in the Netherlands…

The Scandinavian nickname originates from her performance in the 1988 Elitlopp as a 5-year-old. Being an unknown quantity in Scandinavia and up against some of the world’s best in Sugarcane Hanover and Napoletano, her odds was 408 for 10 in her elimination. After the elimination heat everybody knew her name, however, as she shocked the Swedish crowd by forcing Pay Nibs to a rather insane 1:06 opening (roughly 26.4 quarter) while huge favorites Sugarcane Hanover and Napoletano made huge breaks. But Us Action’s extreme opening speed rebounded on her and in the final stretch it was obvious the roan filly was completely exhausted. But fortunately her for and Bosscha, so were a few others and while Sugarcane Hanover and Napoletano battled for the win, Action Skoatter bare managed to finish fourth and thus grabbed the last spot in the final.John Campbell later explained of how he would have liked to have picked post 2 for Mack Lobell for the Elitlopp final but Dutch filly forced him into a rethink: «it’s just a little easier from the second post and I would have liked to have [post] two, but I did not want to have any chance of Action Skoatter having the rail. She could leave too fast!» Of course, with Action Skoatter being of one the last qualified horses, she had to settle for post 8. That starting post didn’t seem to bother the Dutch pair, though, and the filly flew out of the gate but could not get past Mack Lobell in the first turn.

She had incredible speed but it was wasn’t always helpful, though. She could be headstrong and challenging to control at times. More than once Bosscha was leaning back heavily in the sulky. Not because he wanted to be like some of the American drivers, but rather because Us Action was pulling heavily and he tried – sometimes in vain – to stagger her. When the mare played out her speed uncontrollably she could give the appearance of being rubber-band powered; fast for a little while but then fading badly. The Solvalla final became one such experience. The brutal elimination heat and tough trip in the final simply became more than the Flying Frisian could handle. Going into the last turn she had already hoisted the white flag of surrender and she finished the race well behind the rest. But even though she was out of the money, a whole trotting world had taken notice of her speed.

Overall she won almost everything at home that year, finishing the year 21-3-3 in 33 starts. She did suffer a few minor disappointment, two of them being a third-place in the Dutch Championship and a fourth-place finish in the Prijs der Giganten (behind Friendly Face, Quartz and Park Ridge Lobell in the final after again winning her elimination). Her best performance was probably in the European Championship for 5-year-olds in Gelsenkirchen where she finished second behind the Swedish trotter Piper Cub.

Us Action started the 1991 season well, going 7-3-0 in 14 starts, including wins in Sprintkampioenschap van Alkmaar (the Alkmaar Sprint Championship) and the Willem H. Geersenprijs until she sustained an injury in May, which would eventually sideline her for a full 18 months. It was not until November 1992 before she returned to the track with a win at Wolvega. She would only make three more starts as a 9-year-old but ended 1992 with 1-1-1 in 4 starts.

At this point her career would normally come to an end as she was reaching the Dutch age limit at the time. But every now and then rules are bent to facilitate certain stars – and in the Netherlands, Action Skoatter was *the* star. So the Dutch association simply changed the age limit rules to allow Us Action to keep competing. It didn’t make that much difference, however, as the roan mare only made 3 starts as a 10-year-old. One of these starts was a win in the Grote Sterrensprintersprijs (Big Star’s Sprint Prize) at Wolvega. However, on May 9, 1993 it was all over as Action Skoatter participated in her last race.

Her career in numbers read 92 wins, 19 second place and 11 third-place finishes in 147 starts. She earned 1 103 059 Dutch guilders (500 546 euros) and her fastest time is 13:5/1:58.1f. In total, she set 35 records (country, race or track) on both foreign and domestic tracks. Action Skoatter had 6 foals but her first foal, a colt by Harmonious named Maestro Skoatter, was acidentally killed by his dam few days after giving birth. The second foal, Naction Skoatter, by Giant Chill, was a decent trotter who won the Dutch Derby for 4-year-olds in 2000. The remaining foals had very limited careers. 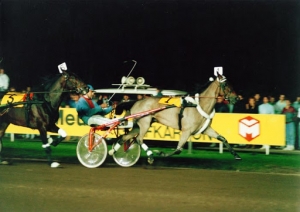 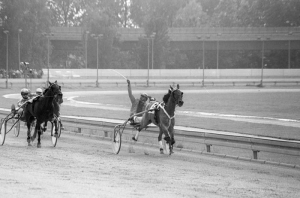 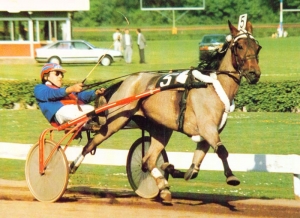