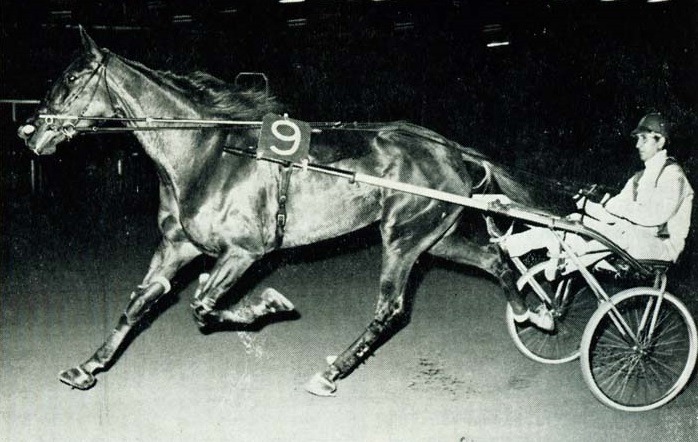 When the 2:04 1/4 mare, Gaiety Mite, by Volomite out of Gaiety Guy, a full sister to Lee Axworthy, was exported to Italy in late 1938, nobody knew that in just three generations a maternal descendant would return to the US – and that, another two generations down, one of the more influential – yet also very unlikely – stallions in all of harness racing history would emerge. Gaiety Mite had finished 9th (out of 10 starters) in both heats of the 1936 Hambletonian, won by Rosalind, but was still a solid trotter. She had set her 2:04 1/4 career record in Aiken, SC in October 1938, roughly two months prior to her export.

Less than two years later, in 1940, Gaiety Mite became a pawn in Mussolini’s failed efforts to eliminate foreign influences from the Italian language. Seeking to replace foreign word in sports with Italian words, such as «pallacorda» for «tennis» and «disco su ghiaccio» for «ice hockey») the whole thing went well until the government started to rename foreign, i.e. US-born, trotters. Gaiety Mite became «Gaiezza» and example of other trotters renamed under this scheme includes top trotter Prince John who became «Principe Giovanni» and Miss Vermont who simply became «Signorina». After many complaints by bettors, who complained that the new names caused confusion and made it very difficult to recognize foreign trotters, the fascist government, believe it or not, listened to its citizens and reluctantly excempted foreign trotters from its policies. Gaiety Mite did well in Italy, finishing second in Campionato Europeo in both 1939 (to McLin Hanover) and 1940. Bred to Schnapps, winner of the 1936 Tompkins-Geers and second favorite in the auction pool of the 1937 Hambletonian, she gave birht to her only foal, Juta, in 1943. Juta did not start but did reasonably well as a broodmare, producing several decent trotters from 1948 to 1963. Juta’s third foal was a 1953 bay filly called Gautier by the US-born stallion Volotone. Gautier was a decent trotter who took a record of 1:23.8km/2:14.4f (nothing special but not terrible on Italian tracks that weren’t very fast compared to US tracks) but surely nobody could predict how exceptional her first-born would turn out.

Her first born came in 1963 when Gautier delivered a chestnut mare who was named Agaunar. Agaunar was by the chestnut trotter Oriolo, him by French sire Pharaon (who also sired another chestnut Italian superstar, Tornese). Oriolo was a good, though not great, trotter on the track but turned out to be a multiple Italian champion stallion. Agaunar started her career a bit slowly, her only top-three finish of note at 3 being a third-place finish in Gran Premio Italia. The following year she won Gran Premio Citta di Torino and finished third in Gran Premio Continentale. But like fine Italian wine, Agaunar got better and better as she matured. At 5, in 1968, she won both Gran Premio Gaetano Turilli and Ponte Vecchio. Strong and blessed with a trademark strong finish, she proved herself one of the better aged mares in the world twice that year. First in the Premio di Lido in Rome she gave Roquepine and Eileen Eden tough opposition and then a month later when she didn’t finished far behind Roquepine and quite a bit ahead of the third-placed Eileen Eden in the Premio Roma.

Agaunar was very popular with the Italian trotting fans but her owner at the time, Viscardio Giuliani, was not. Overruling trainer Odouardo Baldi, Giuliani would occasionally opt Agaunar out of the biggest races against some of the French superstars, for example the Lotteria in 1969 where he did not want to meet Une de Mai (even though there were other great trotters there such as the ever-present Eileen Eden and Tidalium Pelo). It made no sense since in 1969 Agaunar enjoyed a particularly stellar season winning several «Gran Premio» races such as Citta di Montecatini, Della Repubblica, ENCAT and Ponte Vecchio. She was also invited over to the International Trot and Giuliani initially accepted. When Agaunar was one of the three horses stranded in Europe because of a Pan Am strike (a strike that caused the International Trot to be postponed for a week; the other two stranded horses were eventual winner Une de Mai and her French compatriot Thetis IV), Baldi and Giuliani decided to start her in a race in Montecatini to keep her fresh but when the chestnut mare finished second to Gladio her owner withdrew Agaunar from the International Trot at the last minute citing a lack of form. It must be added that Gladio, a son of the grey 1957 Yonkers Trot second-place finisher Silver Way (out of a full sister to Greyhound), was a good horse. It is doubtful that Agaunar was really out of form, it was more likely a childish knee-jerk reaction from a moody Giuliani. Some US newspapers at the time even reported that Giuliani didn’t pull Agaunar out of the race, he just repeatedly refused to answer the phone when Roosevelt called to confirm Agaunar’s participation and the Roosevelt people, eventually picking up on Giuliani’s immature antics, replaced Agaunar with Earl Laird so as not to be a participant short.

In 1970 Agaunar was still among the best in Italy and won races such as the Gran Premio Societa Campo di Mirafiori, ahead of Barbablu and Eileen Eden – winner of that year’s Elitlopp, and the Premio di Lido ahead of French star Tony M. Because of an Italian rule at the time that prohibited mares older than seven from racing, the mare was sold for an amount around $50000, to another Italian, Luciano Tamarovski and his Swedish partner Ulf Moberg. Agaunar was moved to Sweden where she was trained by Håkan Wallner and usually driven either by him or Berndt Lindstedt. She won Kalmarsundspokalen, Rommeheatet and Lime Abbeys Lopp, not the biggest races but still of some stature, before being invited over to the 1971 International Trot. Although she played no significant part in the outcome of the race, won by Une de Mai ahead of Fresh Yankee, she became historical as part of the first coupled entry in the history of the International Trot. Agaunar, representing Italy, was coupled with US represenative Dart Hanover. While that may sound a bit strange it simply boils down Ulf Moberg owning part of Agaunar and all of Dart Hanover. (That Swedish-owned and trainer Dart Hanover represented the US is a bit of a technicality as well since he did so on the basis of winning the American Trotting Championship.)

When Agaunar was sent over for the International Trot she was then leased out for the rest of 1971 and all of 1972 to a group consisting of trainer Lee Broglio, William Schlessinger, Dick Schwartz and Leon Machiz. The group also secured the right to breed her and keep the first foal. In an interview in the Daily News on Oct 30, 1971, Broglio revealed he intended to breed the mare to Hickory Pride. Agaunar was 9 years old in 1972, past her best and only managed one win in Broglio’s care until she retired at the end of 1972. She could then look back at 66 wins in 217 career starts at the highest level, a 2:02.1h record and $532.618 in career earnings. Agaunar is still considered one of the best trotting mares Italy has ever produced.

Agaunar went on to become a broodmare at Pine Hollow in New York. Broglio’s plan of a foal by Hickory Pride never materialized and Agaunar proved difficult to get in foal. In fact, she only had two foals – but all you need is one: her first-born would help secure Agaunar’s place in breeding history and future pedigrees.