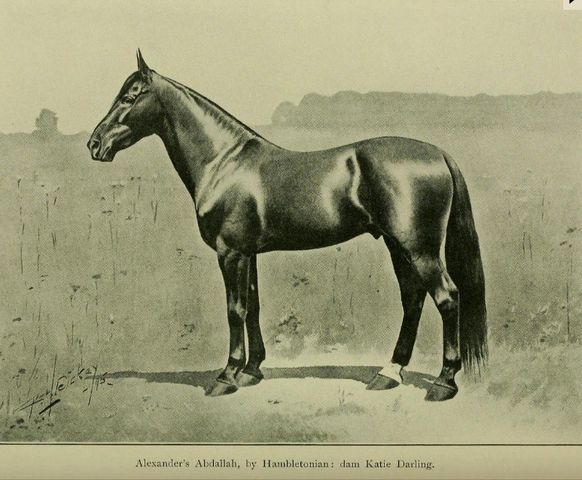 Four mares were bred to Hambletonian 10 when he was an unknown two-year-old. Not only that, but these breedings were free – the only ones of his 1335 foals where no service or foal fee was charged. One of these four mares was Katy Darling. She was described as a wiry little mare who had attracted attention early in her life because she showed a lot of speed. In a road race against another mare, however, disaster struck. Katy was winning the race, in a course that passed over a railroad track, when her foot got caught in the rails. Initially it was believed that the leg was broken but given the possibility that it was just a strain Katy was helped to the nearest stable where the owners abandoned the crippled mare to the stable owner, Carl Young, who in turned sold Katy Darling to Louis Sutton, a farmer in Orange County, in March 1851. She was then bred to the two-year-old Hambletonian later that year.

The foal, born in 1852 (on August 27 according to most reliable sources but September 22 according to a few) in Warwick, Orange County (New York), showed so much natural speed as a young colt that he soon became the talk of the neighborhood. Sutton eventually sold him for $500 to Hezekiah Hoyt and Major Edsall when he was one year and five months old. Edsall eventually bought out Hoyt and the horse would eventually became known as Edsall’s Hambletonian. The horse only made one official appearance on the track. In a match race he distanced Albion in 2:42.

At the Orange County Fair in 1858 he was awarded first prize for aged stallions. At little later, in March 1859, when James Miller and Joseph F Love of Harrison County, Kentucky, went to New York to look for a stallion from the Messenger bloodline they ended up buying Edsall’s Hambletonian and in the process his name was changed to Love’s Abdallah (some historical documents quote the price as $2500 and some as $3000, regardless it is fair to say the amount was substantial for its time). The stallion was also the first son of Hambletonian to stand stud in Kentucky. He stood at Joseph Love’s farm in Cynthiana until he in the fall of 1862 was sold to RA Alexander’s famous Woodburn Farm. The horse now became known by his final and most well-known name, Alexander’s Abdallah. This transaction took place during the Civil War. In Kentucky things were unfortunately not entirely safe and on February 2, 1865 the 13-year-old stallion was captured in a raid by Union soldiers. Ridden 50 miles overnight, Alexander’s Abdallah died of pneumonia 5 days later in Lawrenceburg, Kentucky. A tragic irony of the situation was that Asteroid, a thoroughbred stallion also captured in the raid, escaped injury and was returned unharmed. He lived to be twenty years old but was a dismal failure as a sire whereas Alexander’s Abdallah, one of the most promising trotting sire, perished.

Generally Electioneer and George Wilkes are considered the best sons of Hambletonian. There can, however, be no doubt that Alexander’s Abdallah should be considered to be of similar – or maybe even higher quality. In «The Kentucky Harness Horse» Ken McCarr wrote «no one knows the immensity of the loss to Kentucky and the horse world by the death of this thirteen-year old horse. It was hard to judge his true worth to Kentucky, for many of his Kentucky foals were lost in the war. But while still in New York, Abdallah had begotten a mare called Goldsmith Maid. This mare lowered the world trotting record seven times (…) If Alexander’s Abdallah could get a daughter like Goldsmith Maid from an old broken-down road mare, he would surely have revolutionized the harness racing sport if he had had access to the great mares at Woodburn and elsewhere in Kentucky.»

He entered stud when he was 4 years old and in his first season at stud when he sired the famous Goldsmith Maid. In only two seasons at Woodburn he sired numerous famous trotters such as Almont, Belmont, Thorndale, Rosalind, Major Edsall and St. Elmo. Major Edsall went on to sire Robert McGregor who in turn sired world record holder Cresceus, a horse linebred 3×5 on Alexander’s Abdallah.

As noted in Southern Economic History, «in addition to the brilliant record of this horse as a sire of speed, he is especially noteworthy today, when a large amount of attention is being paid to the improvement of the standardbred horse in conformation and quality, in that he was himself a horse of excellent individuality, which in turn was inherited by his descendants.»

Without the war it is not inconceivable that he could have produced 10 more crops. It is impossible to say what could have been but all trotting historians agree that the early passing of Alexander’s Abdallah was a big loss to trotting.