The winner of the 1930 and 1933 Prix d’Amerique, Amazone B, born 1924, was a great early example of the potency of mixing one French and one American parent. Amazone B combined the strength and endurance of her sire Passeport and the raw speed of her dam, the American mare Anna Maloney, imported in 1921. 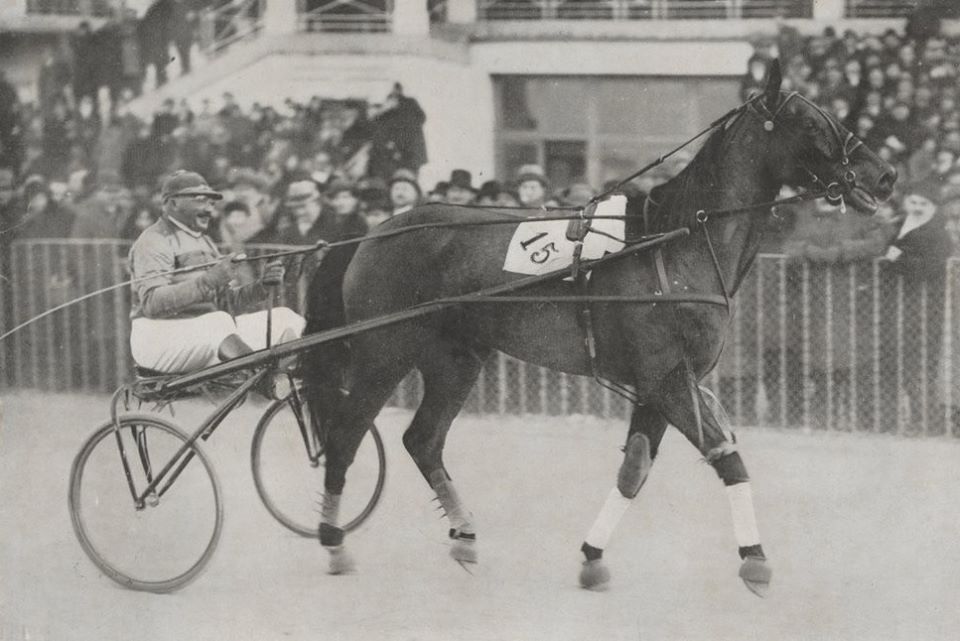 Anna Maloney was born in 1912 in White Plains, New York and bred by William Deveson. She was timed in 2:09 when she finished second to David Guy in the second heat in a race in Poughkeepsie on August 23, 1918. (Anna received quite a bit of attention in media for an accident in the third heat when she caught her foot in a boot in the home stretch and threw Deveson who fortunately escaped injury.) In the Pittsburgh Post-Gazette on May 4, 1919 it was reported that «Anna Maloney 2:18 1/2, owned by William Deveson of White Plains, NY, is being liberally staked this year, both on the large and small rings. She was second last year at Poughkeepsie to David Guy and has a great flight of speed.» Just two weeks later it was said about her that she «started five times last year on the half mile tracks and did not win any heats, her previous record being 2:18 1/2, but her entry here is assumed to mean that she has speed hidden about her carcass.» Her 2:18 1/2 must have been set at a very small event not widely reported. From newspaper reports on her performances, she seems to have been prone to making breaks and was very inconsistent but she also had a great flight of speed. Amazone B had her dam’s smaller body as she only measured 157cm (slightly below 15.2 hands) but fortunately did not inherit the inconsistent and erratic behavior of her mother.

Amazone B was a bit of a late bloomer and only won 1 of 11 races as a three-year-old, the Prix de Creuilly on Christmas Day, but improved steadily and at four was already a very good horse. In September she even beat the trotting queen Uranie, though the latter in fairness had a 150 meter handicap. She was one of those trotters who excelled at all distances and in addition to winning two Prix d’Amerique trophies she was undoubtedly also the best sprinter in France at the time. In 1931 she set a track record at the newly opened La Croise-Laroche track with 1’18″2/2:05.4 (through this record was shattered to pieces by Muscletone 5 years later) over a distance of one kilometer while her mile record was 1’19″1.

Visiting Austria in 1929, she won the Grand Prix of Vienna and the Graf Kalman Hunyady trophy. The next year she won her first Prix d’Amerique. As the field approached the top of the Vincennes uphill, the ruthless trotting queens Amazone B and Uranie attacked the leading Sam Williams and quickly moved around him before pulling away from the field, the only who managed to keep up was the very good Benjamin III. Even though Uranie was pushing her hard down the final stretch, Amazone B held her off to take her first win in the PDA. The next year she lost to Hazleton but won the Prix d’Europe and the Prix de Buénos-Aires at Enghien. In 1933 she won another Prix d’Amerique, this time in record time and in extremely impressive fashion. Given a 25 meter handicap because of her win in 1930, the race was expected to be won by one of three US born trotters trained in Italy: Guy Fletcher, Net Worth or Plucky. But Amazone B started at a high speed and quickly caught up to the field. Instead of resting, she immediately started to go around her opponents and down the final stretch she pulled away to win by five lengths ahead of the trio mentioned above (with Austrian trotter Heinrich taking fifth place). 1934 was a disaster as she finished last and in 1935 she would only manage fifth place herself when Muscletone won.

Like Uranie, Amazone B often had to overcome long handicaps. For example, in the 1931 Prix d’Angleterre she started 75 meters (65 yards) behind two opponents and 100 meters (90 yards) behind the rest … but still won. Yet, sometimes it was too difficult even for her. She was described as an exceptionally fast trotter but also with strength to fall back on. She could, however, be temperamental and capricious. Although generally well-behaved, there were a few races where she supposedly quit for no good reason early on in the race. Then again, a queen should have some privileges, right? (And more than one French trotting queen has been a diva of sorts…)

I cannot lie, I am biased. Of all the French trotting queens, I hold Amazone B (and of course Roquepine) in particularly high regard. I am, to be honest, in love with her maternal family. Her dam, Anna Maloney, is inbred 2×3 on world champion Nancy Hanks and hails from the most blue-blooded maternal family at the time. The truth of it is that Anna Maloney was one helluva broodmare, surely one of the better the world has seen – and one which continues to leave a mark today. Her sisters Heroine B and L’Amazone B were in particular terrific trotters.

L’Amazone B, born 1933, won the 1938 Prix Marcel Laurent, the 1939 Prix Doynel de Saint-Quentin and was second in the Prix de Belgique the same year. She was also one of three favorites in the 1939 Prix d’Amerique (together with the German star Probst and eventually winner DeSota) where she was one of the two French hopes against the many top foreign trotters that year. After 1940 I cannot find any information on L’Amazone B so I suspect she died early (but whether it was war-related is impossible to say, if anybody knows more please send me a message).

Heroine B won, among other races the 1933 Prix Marcel Laurent and the 1934 Prix de la Haye. She would later be an excellent broodmare as the dam of Tais Toi (winner 1946 Criterium des 5 ans and 1948 Gran Premio Duomo in Italy). though Heroine B’s lasting influence came though another very good daughter, Sonate. Sonate is the 4th dam of Dimitria, winner of the 1976 Elitlopp for Leopold Verroken. Dimitria was a great trotter but is probably better known as the maternal grandmother of Etta Extra and now we have arrived at true broodmare greatness. Etta Extra is the dam of the fantastic mares Qualita and Mara Bourbon as well as Sam Bourbon. She is also the dam of 1:58 trotter Kamera Bourbon – in turn the dam of 1:57 mare Vita Bourbon. Vita Bourbon is none other than the dam of Face Time Bourbon, winner of the 2020 Prix d’Amerique.

As if that’s not enough, Amazone B’s younger sister Emeraude VIII is the dam of Nebuleuse V – winner of the 1943 Prix d’Amerique. How can one not admire this maternal family?