Anteeo Custer – under the radar

Sometimes a horse receives attention disproportionate to its trotting abilities. Anteeo Custer is a perfect example. He was a good trotter a century ago in Scandinavia, but has received much more attention for one foal that may or may not be his. 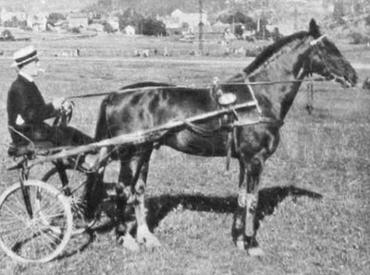 Born in the US in 1910, Anteeo Custer (sometimes incorrectly referred to as Anteo Custer) was imported to Denmark together with his dam Bertine the same year. As a 2-year-old he won the Dansk Opdrætningsløp (Danish Bred Race) and then the Dansk Trav Kriterium, the biggest races for 2 and 3-year-olds respectively, the following year. Both races were won comfortably in new race record times. He failed to win the Derby in 1914, thus failing to become a Danish Triple Crown winner, when he only finished third in that race. It is very difficult to find further information about Anteeo Custer’s trotting career in Denmark but his name does not show up as a top-3 finisher in any of the bigger races at the time.

In 1917 he was exported to Norway, supposedly as a stallion. Very little is known about his time there but it does not appear he raced at all and he was also used sparingly as a stallion, though he did sire Prins Custer, one of the better Norwegian horses in the 1920s. In 1928 Anteeo Custer was sold to CA Lundgren of Mellerud, Sweden together with several Coldblood trotters. Two years later, in 1930, the Coldblood trotter Solo, officially sired by Omer Jakson, was born at Lundgren’s farm. (Omer Jakson, a Coldblood trotter, was also owned by Mellerud.) Solo was the all-dominant Coldblood trotter at the end of the 30s, finishing his career 63-13-26 in 114 starts. He was of typical size but more refined than the typical Coldblood trotter at the time (the breed has since been much refined through breeding). His looks and conformation combined with a un-Coldblood like speed made many suspect that the official pedigree was fraudulent. Rumors quickly surfaced that Solo was really sired by Anteeo Custer. Anteeo Custer himself had died in 1929 from a reputed accident at Lundgren’s farm.

Eventually Solo was suspended by the The Swedish trotting association, STC, who also wanted Lundgren to declare the paternity under oath, which he flat out refused to do. Some time passed and eventually Lundgren threatened to sue STC if Solo was not allowed to race again. STC felt they had no choice, back then science couldn’t help them prove or disprove the paternity, and relented. The parental heritage of Solo has been debated for decades ever since and is still a hotly contested issued. Subjective conformation descriptions and pictures are used by either side to prove their point. Today, Solo is found many generations removed in pedigrees, however, so the issue isn’t vital to the sport itself. His sireline also died out relatively quickly as none of his sons managed to reproduce their speed.

There is no question of Anteeo Custer’s pedigree, though. He is by Ed Custer out of Bettine, a daughter of Anteeo. Although largely unknown now, Anteeo was at one point a big name in the trotting world. When Anteeo was sold as a 12-year-old at auction in February 1891 he fetched $55 000, the highest price ever paid for a horse at auction. Anteeo was sold by Mrs MR Bissel and SA Browne to close their partnership, according to an article in the NY Times on Feb 20, 1891. After a bidding war including both of his former owners, John D Rockefeller’s agent and George C Morgan of Chicago, Browne eventually had the highest bid with $55 000.

But the world’s most expensive horse at auction had his negatives. In the article «Light Harness Gossip» in the Chicago Tribune, published Nov. 17, 1901, it says about Anteeo and his sons: «The only trouble with the Anteeo branch of the Electioneer tribe is that its members are liable to inherit the vicious disposition of Anteeo, who was a horse devil, if there ever was one. He was not only mean but, like most horses of that class, had an almost human intelligence and malignity (…)»

In one of the more famous stallion battles of earlier times Anteeo displayed that intelligence and cunning when nearly killing Empire, a rival stallion also standing stud at SA Browne’s farm at Kalamazoo. Anteeo had broken out of his stall and got into a small paddock. From there he kicked down a tight board fence – or enough of it to enable him to crawl through into the paddock that lay behind the stall of Empire. Finally he broke down the back door of Empire’s stall, and when that was done he entered the little building and attacked the other stallion. When farm hands finally came to Empire’s rescue he had been thoroughly and viciously beaten by Anteeo.

Had it not been for the controversy surrounding Solo’s pedigree Anteeo Custer would be a largely forgotten horse, only appearing in some Danish records. Instead his name will always be remembered for his possible involvement in the biggest case of suspect pedigree fraud in Coldblood history.