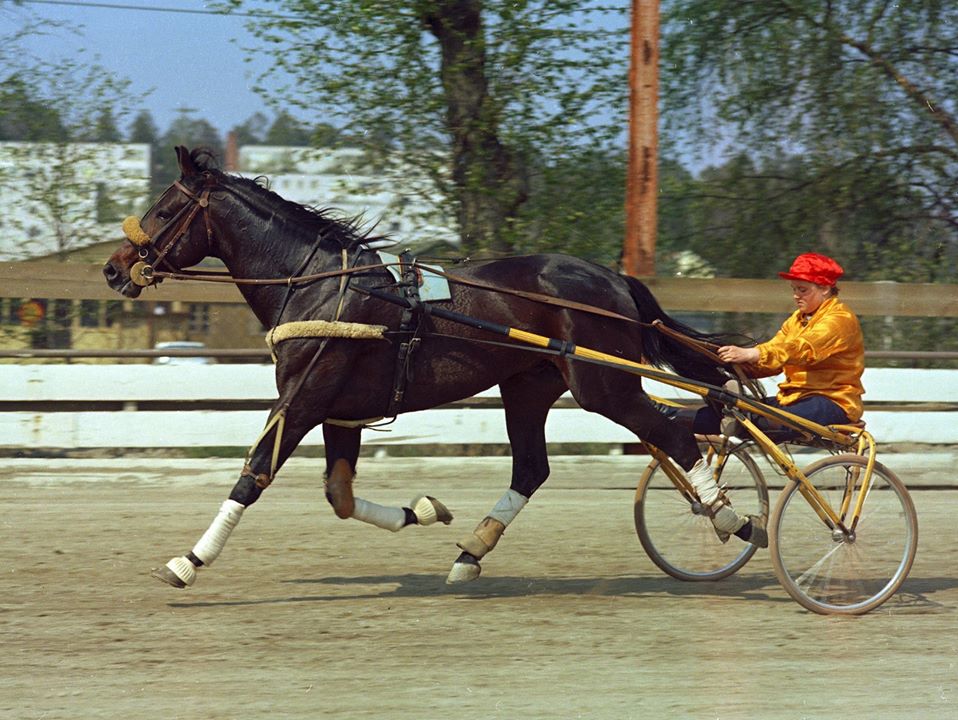 Although little Apex Hanover (150 cms, 14’3 hands) won the 1961 Arden Downs and George Wilkes Stakes as a 2-year-old, there was very little to indicate that the $18000 yearling purchase would later would enter the world stage. Trained by Del Miller and usually driven by Miller’s chief assistant Jimmy Arthur, Apex was one of the better in his crop and would go on to become a good aged trotter. He set a track record at Arden when winning the Arden Downs in 2:06 as a 2 year but was only regarded as an outsider for the Hambletonian, way behind somebody like Impish who had set a 1:58.3 world record as a 2 year old. He did not have a great 3-year-old season and after he finished last in the 9-horse Historic Dickerson Trot on July 3 at Goshen, it was obvious Apex would not be a factor in the bigger races. What held him back, though, was problems with his hind legs and Miller did not even start him in the Hambletonian or Kentucky Futurity.

Moved to Billy Fleming’s stable, Apex improved steadily as a 4-year-old, winning several conditioning and free-for-allers – and when meeting the best aged trotters he held his own nicely. In the Harness Tracks of America Trot (HTA Trot) at Northville Downs he finished third behind AC’s Viking and Tercel but ahead of such a good trotter as Sprite Rodney. In the next leg of the HTA Trot at Scioto Downs he finished second to Pro Hanover but ahead of previous year’s Hambletonian winner AC’s Viking.

In November 1963, owner Roy Cleveland disposed of his stock at the Harrisburg auction and according to a note in the Evening Standard on Nov 6, «the top price of $22000 was paid for Apex Hanover by Tom Gillen, Carbondale, Pa». But for whatever reason the sale never went through and Apex remained in Roy Cleveland’s hands.

The next year he remained one of the better aged trotters and his story took off in July 1964 when he and Spindletop Joe, another US trotter, were invited to the Soviet Union to race in a 3 heat race, the International Peace Prize (Spindletop Joe did not start in Moscow, however). The duo were the first US-owned horses racing in the Soviet Union (US-owned horses had, however, raced in Russia prior to the Communist takeover). The journey to Moscow was an arduous one: on July 20 Apex Hanover flew from Kennedy Airport to Frankfurt, Germany, changed planes and continued to Berlin. There they changed to a train and traveled from Berlin, through Warsaw, to Moscow in a freight car, arriving on July 26 – a full 6 days after leaving New York.

Driven by Billy Fleming, Apex Hanover won the first heat on Soviet soil rather comfortably and finished second in the other two heats. The winner was determined on the best overall time for the two fastest of the three heats. Apex Hanover’s aggregate time of 4.09.8 was sufficient to defeat the Russian trotter Legion (who finished second on 4.10.4 – and a solid portion of help as described below) to win the overall trophy in front of a crowd of 25000 and a grandstand box crowded with US Embassy staff.

Although Apex was the big favorite, victory was not a foregone conclusion. Because of his career earnings he was given a 25 meters handicap, the track was furthermore harder than he was used to (it was described by Roy Cleveland as having «exactly the same consistency as Fifth Avenue, New York City on a hot summer afternoon») and not as well prepared either (several observers described the track as «wavy») and finally he had to contend with what Fleming diplomatically called «traffic problems.» That was a very diplomatic phrasing, however, as the Soviet drivers intentionally tried to block him and help their own horse Legion to win. In the third heat, three Soviet competitors spread across the track while Legion was several lengths ahead. Although Apex managed to get around them, it made it impossible to win the heat.

The crowd knew to appreciate a great performance regardless of nationality or Cold War, however, and Apex received a standing ovation from the crowd. Several Russians in attendance would later tell both Cleveland and Fleming that they liked how the US horse had won it, beating opponents that were colluding against him. Fleming would latter admit to being both surprised but also really happy and proud. That wasn’t the first time on the trip, though: when Fleming first walked into the trotting museum in Moscow, the first picture he was that of his late father, Vic Fleming, with Billy Direct.

Roy Cleveland, the owner of Apex Hanover, said he had never encountered such intentional blocking tactics before and admitted his horse was lucky to get first place under the circumstances. Cleveland won 5 000 rubles (approximately $5 500) but, in a bizarre twist, he could not take the money with him back to the US because of Soviet currency regulations at the time. Cleveland realized there was only one thing to do, namely spend all of the prize money to «buy lots of champagne, caviar and vodka.»

Despite the small victory margin not being very big, impressed Russians knew they had witnessed a great trotter. The day after the race Evgeny Dolmatov, head of the Soviet trotting association asked Leo Doobin, the General Manager of Yonkers Raceway (who was part of the entourage), Bill Fleming, and Roy Cleveland to have dinner with him and Peter Paryshev, chief of Soviet stud farms. During the evening the Russians asked if they would consider a swap of four Russian yearlings for Apex Hanover. Mr Cleveland responded that he thought seven of yearlings would be a fairer swap However, the aforementioned currency regulations posed a problem: Cleveland could not be paid in cash, or more specifically, he could not bring any Soviet cash out of the country. After some negotiations a rather unique deal was worked out: the Russians would buy Apex Hanover in exchange for seven Russian horses and as much caviar and cut glass as Mr Cleveland could carry home from Moscow. Part of the deal was also a promise from Cleveland and Fleming to the Russians that they would train the Russian horses by American standards and race them in the United States, and after the careers the mares would be bred to American stallions.

Just a month later, Lawrence B Sheppard and his daughter Patricia travelled to the Soviet Union to pick out the 7 Soviet yearlings on behalf of Roy Cleveland. Instead of owning and racing all 7, Cleveland gave away 6 of them to prominent American horsepeople, the horses being

As it turned out, the Russian horses were nowhere near the required level and simply wasn’t good enough to race against their US counterparts. One of the Russian horses in the deal, Blitzky, instead became a rather famous outrider at Brandywine.

Apex Hanover became officially owned by the Prilepskij stud farm and put in the training of 29-year-old Maria Burdova. Despite her young age, Maria Burdova was already established as one of the finest trainers and drivers in the Soviet Union. Just a month earlier she had won the Russian Trotting Derby with Kovyl and was highly regarded in the Communist superpower. Apex Hanover and Burdova enjoyed great success both in the Soviet Union and abroad, particularly on French tracks. Apex clearly improved after the sale and thrived in Europe. Even though he was seen as a very fast sprinter he excelled even more on longer distances.

He finished fifth in the 1965 Prix d’Amerique and second in 1966 Prix de France while he won the 1965 Prix de Paris and was second in the 1967 edition of the race. The Prix de Paris win was particularly impressive as the beaten trotters included stars such as Elaine Rodney, Elma, Ozo and Oscar RL. While Burdova usually drove, in France it was Pavel Litvin who had to drive as women were not allowed to drive in French sulky races. A rather angry Burdova uttered that «I thought French women had been liberated» but her comments fell on deaf ears. Apex also finished third in the 1965 Preis der Besten, one of the top German races, won by Oscar RL. A trip to Sweden «only» produced a sixth-place finish in the Elitlopp although a trip to the southern Jägersro track produced a 1.18,2 win, the track’s fastest that year.

When he retired he stood stud at the Prilepskij stud. He was bred to both Orlov broodmares and trotting mares with standardbred pedigrees. Because of his speed and type he was used on quite a few bigger broodmares and he produced well. A leg fracture caused him to be euthanized only 13 years old, and he only produced 149 get in the studbook. His long-term studbook impact was limited, but he will also be remembered as the first US owned trotter to win a race in the Soviet Union – and the first Soviet owned trotter to win a Group 1 race in France. 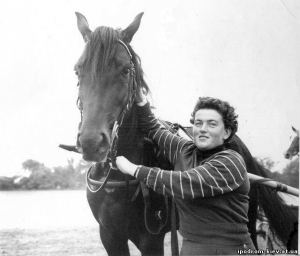 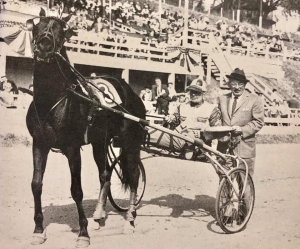 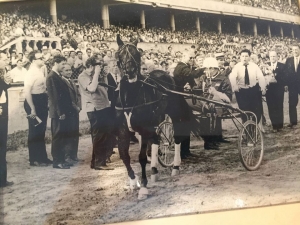