Bred by Almahurst Farm in Lexington and named for golfer Arnold Palmer, Arnie Almahurst was one of the most talented trotters in the 70s. 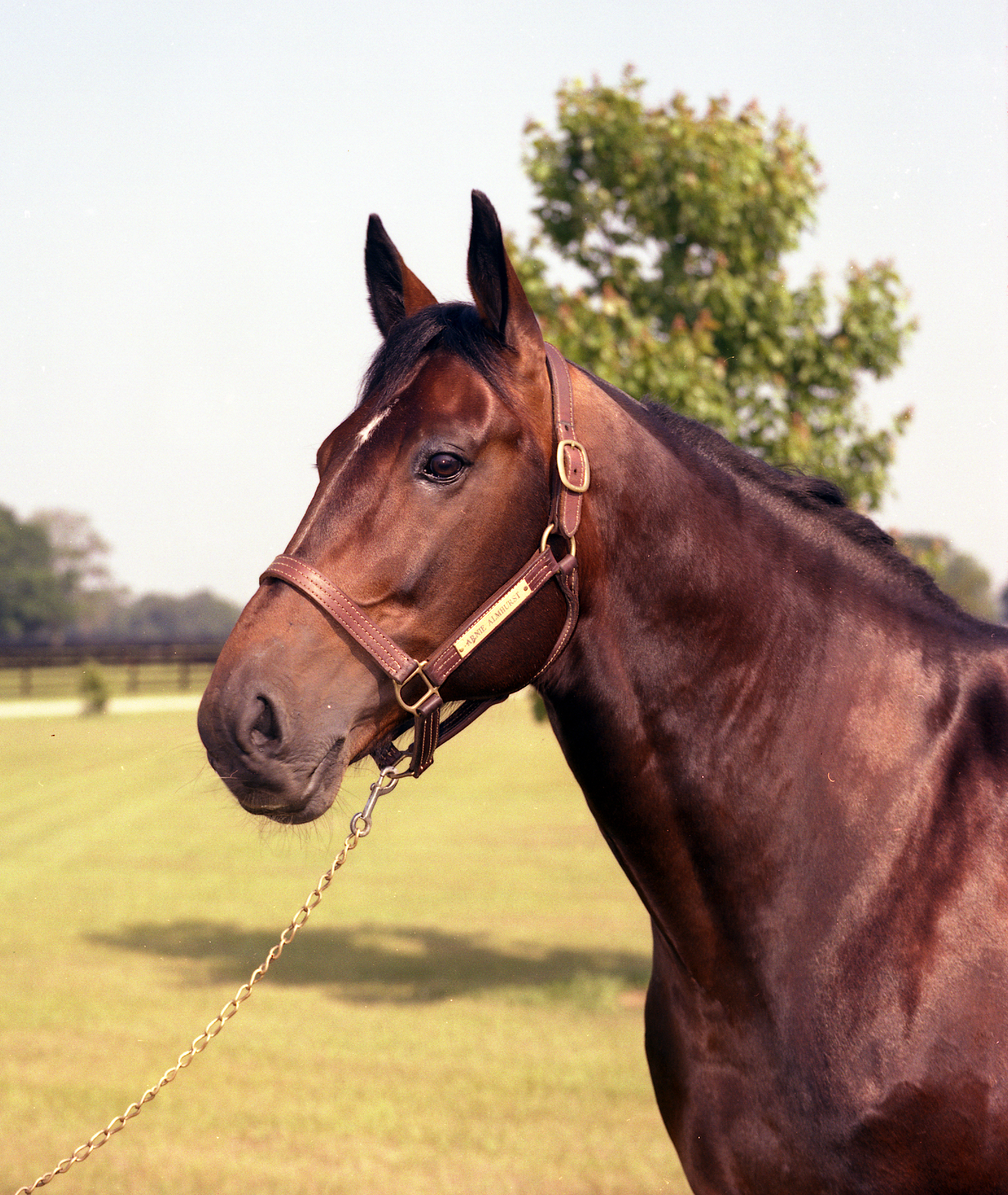 Ohio trainer Gene Riegle had picked up Arnie for $5200 at the Tattersalls yearling auction and the ownership group consisted of his wife plus Roger Black and Don Bolyard of Greenville, Ohio. In hindsight he was a bargain and many probably overlooked him because, in the words of Riegle, «he was a big, bony colt and didn’t look that good. Or maybe it was because nobody knew anything about his dam. She never had a piece of harness on her, you know, but I had a full sister to her that was a nice filly. Name of Another Love, and I won 18 straight with her as a 3-year-old. Race-timed her in 57 and a piece and she had a mark of 2:00.2. That’s why I was interested in Arnie. I made only one bid on him, as I recall, and we had him.»

Arnie immediately showed ability and on Jul 17, 1972 at Scioto he set a national mark with 2:03.4 while racing against older horses in an overnight race. This was his the fourth win in his sixth start, firmly establishing the young colt among the best of the 1970 crop. A few weeks earlier he had won the Matron Stakes in 2:10.3 over a muddy track. At Delaware in September he won and set a new two-heat world record with a combined time of 4:07.1, and it was then that Riegle understood his two-year-old was a bit special, «his knee was all puffed up that day and I put some of Del Miller’s knee paint on him. He sniffed it and blistered his nose, then got some of it in his eye. Then he went out and got that record and I knew he was something special.»

He was something special alright, though «graceful» or «elegant» were seldom words used to describe him. Described as a «big, amiable klutz (…) he moves with the grace of a wounded water buffalo. Arnie’s tractable and friendly but sometimes it appears he has four left feet. He’s like the kid learning to waltz by doing the box step and falling all over himself.»

In October Arnie won the International Stallion Stake in 2:02.1 at the Red Mile before wrapping up his two-year-old season with a victory in the Hanover Stakes at Vernon. His first season on the track had produced 12 wins in 20 starts and $79 146 in earnings. He was voted juvenile trotting colt by Harness Tracks of America and was considered one of the early Hambletonian favorites. This was also reflected by the USTA experimental ratings where his 1:58 rating meant he was in the top three, behind Colonial Charm but ahead of Blitzen.

His three-year-old season proved to be one of inconsistency and highly erratic performances. Starting in the Matron at Wolverine in June, Arnie was the favorite but made a bad break after a poor start. He then also showed the first signs of his newly developed fear of the starting gate, a quirk that would cost him dearly on several occasions. That loss was followed by a five-length win at Scioto. Riegle skipped the Yonkers Trot, won by the then-undefeated Tamerlane, but just a week later the two squared off in the George Washington at Brandywine. Instead of those two battling it out, however, the local horse Walter Be Good surprised everybody by winning easily in 2:01.2.

The Hambletonian was also billed as a two-horse race, Arnie Almahurst against Knightly Way. Arnie had put himself back in contention after extremely impressive performances in the Review Futurity. Having learnt his lesson, Riegle filled his prodigy’s ears with cotton to and kept him several lengths behind the starting gate to avoid the nervous colt making a break and then after a slow start he came on strong at the three-quarters pole and led through the stretch. Other than his fear of the starting gate he was a gentleman. «He was a nice-headed, nice-mouthed colt and never did anything wrong,» said Riegle.

Going into the Hambletonian, Arnie had four straight heat wins and drew post position 1 with rival Knightly Way in position 2. Riegle employed the usual tactics and held Arnie back at the start then started moving forward down the backstretch. As he got outside the leading Flirth and started to apply pressure he made a wild break, however, and finished 16th. In the second heat Arnie was again held back at the start but failed to get into the race and finished a disappointing 10th. But erratic Arnie wouldn’t stay down for long. In a time trial in Lexington on Sept 27 he ran against the clock in 1:57.2. A few days later, on October 1, Castleton Farm purchased a 51 percent share in him at a price of $300 000. A son of Castleton’s own Speedy Scot, Arnie was very similar to his sire and a natural successor.

He quickly started the repayment by winning the Kentucky Futurity a week later. Castleton had demanded that Joe O’Brien drove, hoping the driver change would turn the fortunates around and the decision immediately paid dividends. O’Brien held him back at the start in the first heat, he took the lead at the halfway mark and held off a strong challenge from Flirth to win in 2:00. In the second heat O’Brien and Arnie was too eager at the start and was within a length of the starting gate, causing his bad manners to show up yet again and he broke at the start, finishing last, allowing Knightly Way and John Simpson Jr to win with Flirth again finishing second. In the third and final heat O’Brien stuck to the tried and tested starting tactic and kept Arnie four-five lengths behind the starting gate. Arnie responded by being on his best behavior and a powerful stretch rally gave him a one-length win, again ahead of Flirth, in 1:59 4/5.

He added the Hanover and Stanford Trots to his list of achievements to round off the the 1973 season with 12 wins and $136 053 in season earnings. Flirth naturally took first place in the ballot for three-year-old trotter of the year, but Arnie’s 58 votes landed him above Knightly Way’s 56. He was then retired to stud at stood his first season at Castleton Farm, Trenton, Florida.

And while Arnie was erratic on the track he was similarly erratic at stud but there was no questioning his siring abilities. In his first season he produced Florida Pro and a few seasons later the exceptionally talented but similarly erratic Arndon. Arnie Almahurst was the first stallion to produce three 1:55 trotters (in Florida Pro, Arndon and Diamond Exchange). But the trotting world would be robbed of one of its most promising young stallions as Arnie passed away only 12 year old. He died on Saturday May 29, 1982 of a twisted intestine at the Ohio State University Veterinary Hospital in Columbus, Ohio. He had been discovered ill on Friday morning and underwent surgery later that day but sadly passed away the following day. 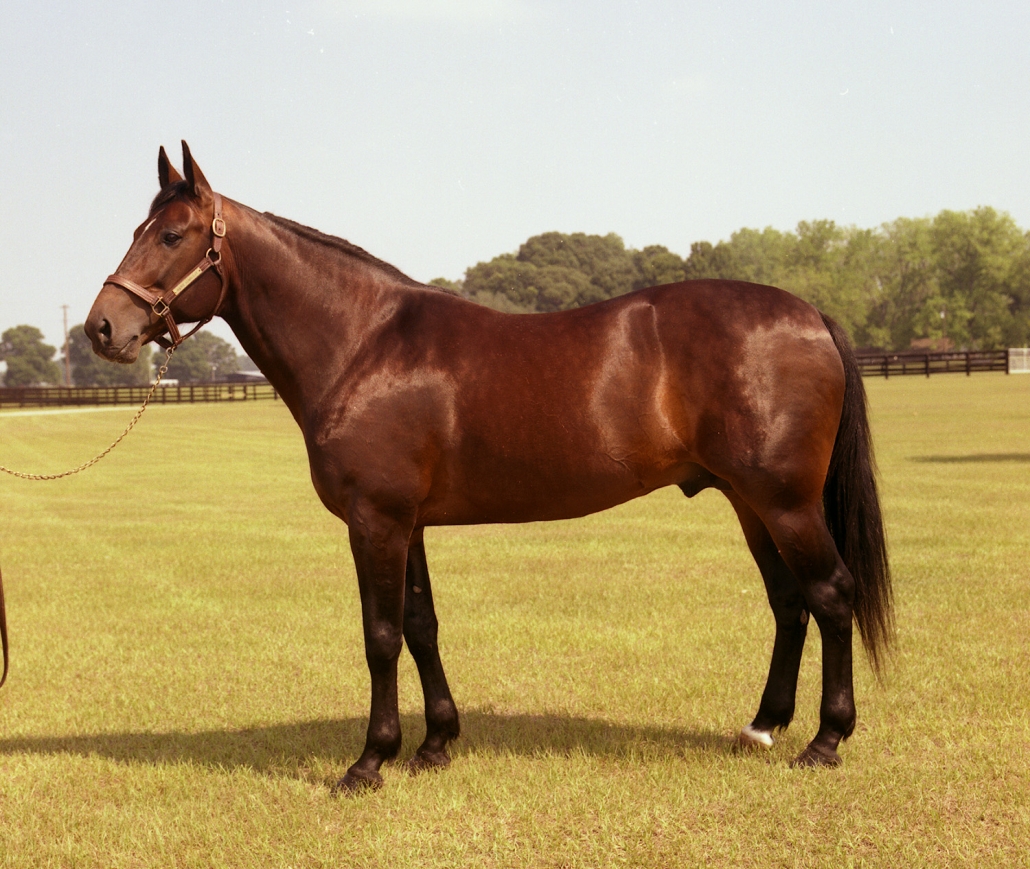 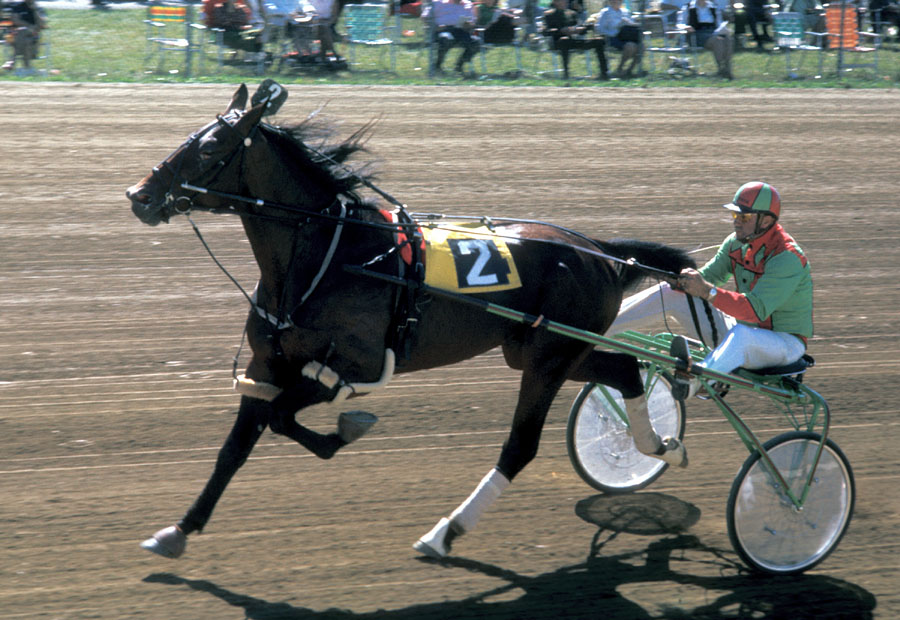