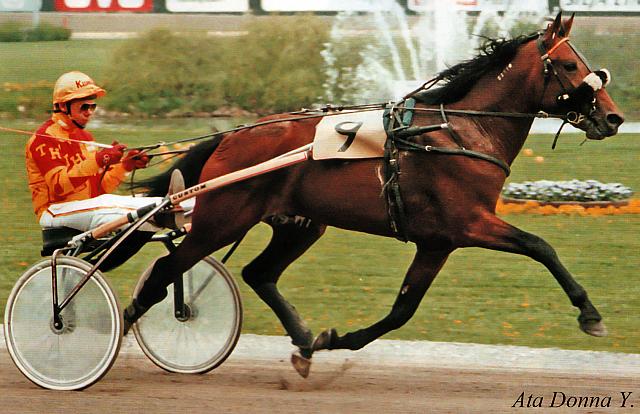 Ata Donna Y, born 1978, was bred in New York (Ata stands for «Apt-to-Acres», the breeding farm of Mayo and Don Sisler in Manalapan, New Jersey). She was sold to Swedish owner and breeder Lennart Cedergren at the Harrisburg auction in 1979. Taken to Sweden early the following year, she was put in the training of Bo William Takter at Jägersro.

She is a full-sister in blood to Hot Dog Suzanne (both are by Speedy Crown and their dams are full sisters), Cedergren and Takter had high expectations but Ata Donna Y only made 5 lifetime starts. Takter felt that not only did the young filly lack talent but since she also possessed a nasty and vicious streak, he recommended that Ata Donna Y be put down.

Fortunately for Swedish trotting, Cedergren refused to take Takter’s advice. Ata Donna Y repaid his faith in her by becoming one of the best broodmares in Swedish and European trotting history. Her first foal, Ata Star (by Tibur), was arguably the best horse in the Swedish 1983 crop even though he failed to win the Svenskt Travkriterium. His performance in Fyraåringseliten, when he from post 8 made two breaks and had to trot three-wide for the whole mile, is by many considered one of the most impressive performances seen on a racetrack. Her second foal, Atas Rocket (by Pershing), won the Swedish Travderby and Grand Prix de l’UET. Her third foal, Atas Fighter L (by Quick Pay) also won the Swedish Travderby and numerous big races later, including the Internatinoal Trot in 1992. The 1992 foal, Atas Ace L (by Napoletano) won and placed in several big races in Scandinavia in the 90s. What makes this unusual is that she produced very well with many different sires.

Ata Donna Y had 14 foals in total and produces a few other relatively talented horses, too. She passed away in 2005.