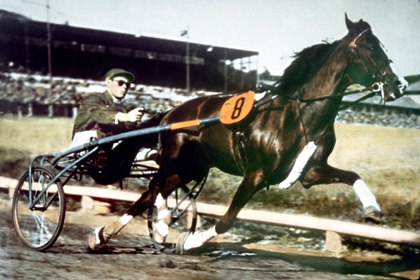 The story of one of the best Swedish horses in trotting history actually starts in Lima, Ohio at EJ Maire’s farm. His broodmare Rona Worthy gave in 1920 birth to a filly by Peter the Great which was named My Sister Lou. In the fall of 1935 My Sister Lou was in foal to High Noon, a very capable Guy Axworthy-son and himself a 2:02 3/4 trotter. (High Noon is through Fionne the damsire of Darnley.) She was at this point imported to Sweden by Reinhold Mattsson at the Kvarnnibble farm outside of Stockholm. Mattson had a sizable breeding operation at the time. He was breeding both trotters and Ardenner horses, and had three stallions stationed at his farm. Two were Ardenner stallions while the third was the the US-imported trotting stallion Encore. In 1945 he sold the Kvarnnibble farm and moved to another farm in Vallentuna.

In 1933, the relatively young businessman Olof Wallenius bought his first horse, the four-year-old Red King. He was a son of Red Bon, a horse that can be described as the first trotting star in Sweden. (There are those that claim that Red Bon died in the sea crossing to Europe in 1922; his body was unceremoniously thrown into the Atlantic while his half-brother silently just became Red Bon instead is a theory that the horse known as Red Bon was in fact his half-brother. Regardless of the actual identity, the trotter known as Red Bon won a race on inauguration day in 1927, was a star there in the next years and is one of only two horses buried there.) After the purchase of Red King, the horse was moved to trainer Gösta Nordin. Nordin improved on the horse and in 1936 he twice set new Swedish records, on the latter occasion with a time of 22,9 / 2:13.2f. The time doesn’t seem like much but European tracks were much slower back then and at the time it was very impressive, indeed.

Not too far away, in 1936 My Sister Lou gave birth to her foal by High Noon. The colt was named Big Noon and was a clone of his sire. He showed exceptional talent from a very early age. His debut at 2, naturally at Solvalla, resulted in a convincing win. Ernst Johan and Gösta Nordin took note of the talented two-year-old and immediately contacted Wallenius. It is said the father-son pair applied noticable pressure on Wallenius: this was a likely star of the future and one the young shipowner should not let slip between his fingers! Wallenius had the resources and soon he also had a glowing desire to buy. When Wallenius put in a bid of 16000 SEK, a massive amount at the time, Mattsson didn’t need much time to accept.

If Wallenius was ever worried about shelling out so much money for a two-year-old trotter, he didn’t have to wait long for those concerns to be put to rest. The following day Big Noon set a new Scandinavian record for 2 year olds, 1.25,5 / 2.17.3f. The charismatic trotter was 3-2-1 in 6 starts at 2. The followed that up with a 9-3-1 record in 17 starts at 3 and an even more convincing 13-1-3 in 19 starts at 4. Despite being the best trotter in his crop he didn’t contest the Kriterium or the Derby, the biggest race in Sweden for three and four-year-olds, respectively. However, this had a natural explanation: his breeder Mattsson simply hadn’t staked him to these races (!)

Many years ago North Americans looked at a 2:00 mile as the magic barrier that few trotters could break. In Europe the magic number was a kilometer in 1.20, a metric figure which is mile equivalent to 2:08.4. At five, Big Noon became the first Swedish-born trotter to beat the 1.20, during the 1941 Swedish Championship, when he trotted in 1.19,4 / 2:07.4f at Jägersro. The time was not only a Swedish but also a Scandinavian record. Big Noon was close to unbeatable in the the middle war years and he was 12-2-3 in 18 starts in 1941 – the following year he was 10-1-0 in 13 starts.

In 1942 Big Noon took place in two races which have gone in history. The first was Matadoren-Rennen, in 1942 raced in late August, at the Mariendorf track in Berlin. The Matadoren-Rennen was one of the biggest races in Europe at this time. Back then, Swedish trotters were generally not at the level of their continental competitors. Despite this, Big Noon won the first heat! He made a break in the second heat and could only muster a fourth-place finish in the third heat, giving him the second place overall. The winner was the French-born star Messidor and Charlie Mills. Messidor had trotted 1.18,1 /2:05.3 in the second heat, then the fastest ever by a French-born horse. Messidor was officially a son of Gäel – and while the official studbook is a complete sham for many of his get, it is in Messidor’s case entirely correct. (For more on this story look for the upcoming post on Calumet Delco). While Wallenius was present at almost all of Big Noon’s starts, he was not in Berlin. The 41-year-old had simply been forbidden by his mother to undertake the dangerous journey to Germany. As the conscientious son, Wallenius stayed home.

However, Big Noon’s visit to Berlin is known for what happened after the race. The day after the race Wallenius got a telegram from Berlin which stated that there were no opportunities to arrange a return journey for Big Noon «in the foreseeable future.» That this was planned was immediately apparent: along with the telegram Wallenius also received an offer for the horse from Germany (!) Naturally, Wallenius now insisted on Big Noon returning immediately. He did not hesitate in contacting Einar Sörensen, secretary of the Swedish Trotting Association. Sörensen had the right connection as he in turn immediately contacted Christian Günther. Günter was a big trotting fan and a regular visitor at Solvalla, but more importantly he was also the Swedish Foreign Minister. Günther quickly sent a telegram himself to the German Foreign Minstry in Berlin. The wording is unknown but the communication must have been relatively direct and to the point: less than two hours later came an official reply from German authorities. They apologized for the misunderstanding and assured the Swedes that Big Noon would be transported back to Sweden the same day.

Occasionally Sweden is criticized for its neutral stance to Nazi-Germany during World War II but this was one of the very notable exceptions. In fact, as one sarcastic observer commented; sure, Sweden stood idly by and were passive spectators to Nazi-Germany basically destroying half a continent but the Swedes stood up to Nazi injustice when thetheir best trotter was about to get stolen from them. A Swedish comment put it even more to the point, «the only time the Swedish lion roared at Wilhelmstrasse during World War II was in regards to a trotter.» (Wilhelmstrasse is the road in Berlin which housed the German government until 1945.)

Just two weeks after the Berlin race came the race for which Big Noon is best known. This was a race in Oslo, Norway technically just called «International race» although it is now simply known as the «Big Noon race.» While in Germany the trotter had picked up a small injury and trainer Gösta Nordin was not too keen on going to Oslo, but they did eventually go.Although Big Noon could now be rightfully regarded as one of the better trotters in Europe, there was a belief in Norway that the US-born trotter, Saint Protector was almost as good. Saint Protector, also born in 1936, was also a very accomplished trotter and the first in Norway to beat the 1:20 barrier. On Sept 13, 1942 the two were to meet for the first and only time at Bjerke (Oslo) in front of 24500 spectators. As foreign-born trotters, Saint Protector and Big Noon were given a 40 meters (44 yards) handicap to the rest of the field in a 2040 meter long race (slightly longer than 1 1/4 mile).

The field needed two attempts to get away. However, in the «valid» second attempt, Saint Protector left illegally early. Nordin expected a recall and didn’t push Big Noon at all. But seconds after Nordin realized there wasn’t going to be a recall. He immediately urged on Big Noon but to make matters worse his star shortly went offstride. After a quarter the Swedish trotter was roughly 100 meters (110 yards) behind the rest of the field.

The lasting memory of Big Noon is the legendary picture of him from the first turn as he’s chasing down the field that day. The solidly built horse was a thing of beauty in a race. His beautiful looks, white blaze and white socks, complemented by a powerful gait with high knee-lift produced a picture of a trotter that exuded power and abundance of energy in every stride. He was simply unforgettable to look at. Nordin’s highly focus look in the sulky contributes to the perfection of the picture.

After all, Nordin hadn’t come to Norway to be humiliated by local horses, especially when he was sitting behind one of the best on the continent! With his massively long stride the solidly built Big Noon trotted up a storm and caught up to the rest by trotting the first 1 kilometer (5/8th mile) in under 1.16 (roughly 2:02). In the last turn Big Noon was fourth, still behind the leading mare Fantazya (out of a sister to the Austrian star Nervus Rerum), Saint Protector and Dux Eno. On top of the stretch Saint Protector accelerated past Fantazya but Big Noon refused to give up. Slowly gaining on Saint Protector with every long stride, Big Noon caught him just in time and won in 1.21,7 / 2:11.2, one-tenth ahead of Saint Protector. (This was not the track record, however, as that belonged to Sir Walter Scott who in 1937 trotted 1.21,5 / 2:11.1.) For good measure, Olof Wallenius donated the prize money to a memorial fund for families of lost Norwegian sailors who sailed on Swedish ships during the war.

Big Noon wouldn’t race much after that, however. Suspensory ligament problems kept him away from the track in both 1943 and 1944. In 1945, at 9, he made a short comeback for one last season. Despite being nine he overcame a two-year absence to win two of six races before finally retiring. At retirement, Big Noon was 49-9-9 in 79 starts and earned 99 112 SEK. His record was 1.18.3 / 2:06. As Big Noon’s career came to an end, Wallenius started thinking about expanding his trotting operations. In 1947 he bought the Menhammar farm outside Stockholm. When he passed away in 1970 his daughter Margareta Wallenius-Kleberg took over the running of the farm and it later expanded into one of the biggest standardbred farms in Europe. Menhammar Stuteri’s logo is made from a picture of Big Noon.

Picture 1: The legendary picture from Oslo 1942. 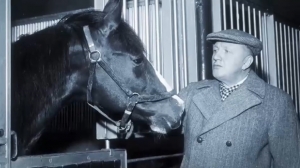 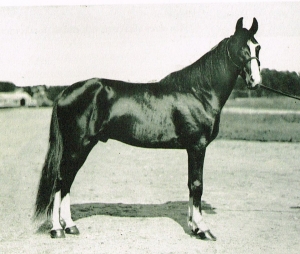 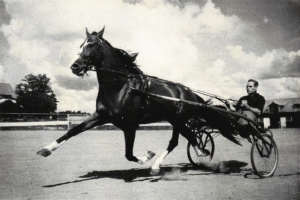