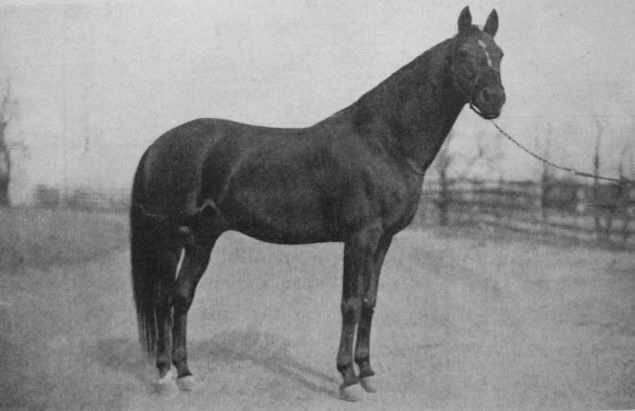 Dillon Axworthy was bred by CM Buck of Fairbault, Minnesota, who in 1909 had sent his dam Adioo Dillon to Kentucky to bred her to Axworthy. Because Buck were in financial difficulties the foal passed into the hands of James Snell of Lexington, KY. On October 15, 1911 it was reported that AB Coxe of Nawbeek Farms had bought Dillon Axworthy for $3000. It was well known that Coxe was partial to Axworthy blood. Coxe entrusted the yearling to trainer JL Serrill. Just a week later, on Oct 22, in the article «With the Trotters and Pacers» in the Detroit Free Press, it read «Dillon Axworthy, the yearling colt that was sold by James Snell to AB Coxe for $3000, stepped a quarter in 35 1/4 seconds handily.» Clearly Dillon had a lot of early speed!

Making his debut on on August 21, 1912, he finished second to Lord Allen in the $11000 American Horse Breeder Futurity at Salem, NH. A week later he won the 2-year-old trot at Elgin, IL, though he needed 3 heats to beat the favorite Nowaday Girl, who just a little earlier had set a new world record for 2-year-olds on half-mile tracks. Dillon repeated the feat the following week at Hartford, CT only this time doing it in two straight heats.

In Detroit on Sept 16, the best 2-year-olds met for the $10000 Horseman Futurity. Lord Allen, Dillon Axworthy and Sweet Alice won a heat each and because of darkness the race-off was postponed until the next day. In the three horse race-off, Dillon took the lead, Lord Allen then overtook him in the backstretch but only for Dillon to come at him late in the final stretch, holding off both Lord Allen on the inside and Sweet Alice who finished strongly on the outside. An article in the Cincinnati Enquirer on Sept 22 called it «in many ways the greatest race ever trotted by two-year-olds.» The Horse Review Futurity at Columbus, OH 12 days later gave his challengers the opportunity for revenge but even though Lord Allen won the first heat, Dillon came back to win the next two heats. He won the fastest heat in 2:11 1/4.

Dillon missed out on the Junior Kentucky Futurity and in a summary of the season in the Detroit Free Press it said «The 2 year olds raced faster than they did in 1911 but not so well as in 1910 when two of them beat 2:10 and two others beat 2:11 in their engagements. However, the sickness of Dillon Axworthy may have something to do with 2:10 not being beaten, for that one appeared to be a grand colt.» The world record stood at the time stood at 2:09 1/2, set by Justice Brooke two years earlier, and it is not inconceivable that Dillon would have beaten it had he stayed fresh in Kentucky.

With 4 wins in 5 starts, Dillon earned $5970 as a 2 year old. He was the not winningest 2-year-old, that honor falling to Lord Allen, with seasonal earnings of $6860, who had taken advantage of Dillon’s illness to win the Junior Kentucky Futurity. Lord Allen was also the fastest 2-year-old with 2:11, slightly better than Dillon’s 2:11 1/4. Observers generally agreed that Dillon was by far better than Lord Allen both in terms of speed and strength but Dillon lacked «perfect manners» and did for example not always leave well.

As Dillon Axworthy was prepared for his 3-year-old season, his dam Adioo Dillon was sold at the Old Glory auction in February for $4500. She was bought by Charles A Tanner, the trainer of Uhlan, acting on behalf of CKG Billings, the owner of Uhlan. Billings wanted to buy a lot of promising broodmares to breed to his champion stallion The Harvester. The same spring Coxe bred Dillon Axworthy to several of his own mares. One of these matings produced Miss Bertha Dillon who won the Matron at 3 and later set a new world record before going on to be one of the best and most influential broodmares in Hanover Shoe Farms’ history.

Making his 3-year-old debut as late as August 5th, Dillon finished second to the near-blind Etawah in the $10000 Horseman’s Futurity. His manners not being perfect, as critics had earlier complained about, caused him to loose a lot of ground early in the first heat and he was timed separately at 2:06 when Etawah won in 2:08 3/4. When Dillon got off on even terms in the second heat one might expect him to finally beat Pop Geers’ blind colt but it was not to be and he again finished second. With Etawah not starting in the Matron a week later it was an easy win for Dillon in two straight heats, trotting in 2:10 1/2 and 2:10 1/4, winning both heats by several lengths. The Detroit Free Press described it as «outclassing his field to such an extend that there was but little semblance of a contest in the homestretch, Dillon Axworthy trotted off with the big end of the $6585 Matron stake at the opening of the blue ribbon meeting on the state fair track Monday afternoon.»

The story repeated itself at the Rockingham Park with Dillon winning both heats to take home the American Horse Breeder Futurity. Missing the Kentucky Futurity (won by Etawah in 2:05 3/4) again due to illness, Dillon Axworthy finished the year with only 4 starts, producing a 3-1 record. He made $10 500 as a 3 year old. His short career consisted of only 9 starts in which he was 7-2-0 with a 2:10 1/4 fastest time (though his efforts in the Horseman’s Futurity had shown he was obviously a lot faster than his record) and $16 470 in earnings. Since he had sold the stallion Del Coronado, AB Coxe wanted to retire his handsome young star permanently to stud duty at his Nawbeek Farm in Paoli, PA. Dillon Axworthy proved an excellent stallion. In addition to Miss Bertha Dillon he produced stars such as Margaret Dillon p1:58 1/4 (fastest pacer in the US in 1922), Nella Dillon (winner of the 1917 Junior Kentucky Futurity, 1918 Kentucky Futurity), Sister Bertha (winner 1920 Matron Stakes) and Helen Dillon (winner 1921 Junior Kentucky Futurity). Horseman Futurity winner Nelson Dillon sired Evensong, one of the most influential broodmares in harness history.

When AB Coxe died in april 1926, Lawrence Sheppard bought all of his horses, broodmares and stallions including Dillon Axworthy, for $150 000. Dillon became one of Hanover’s foundation stallions and stood stud until he was retired at the end of the 1933 breeding season. Incidentally, his last foal was a 1934 colt, world record setter and Hambletonian winner Dean Hanover.

Dillon died in October 1939 at the age of 30. Upon his death, Hanover Shoe Farms owned 31 broodmares by Dillon Axworthy, a clear testament to his breeding excellence and influence. 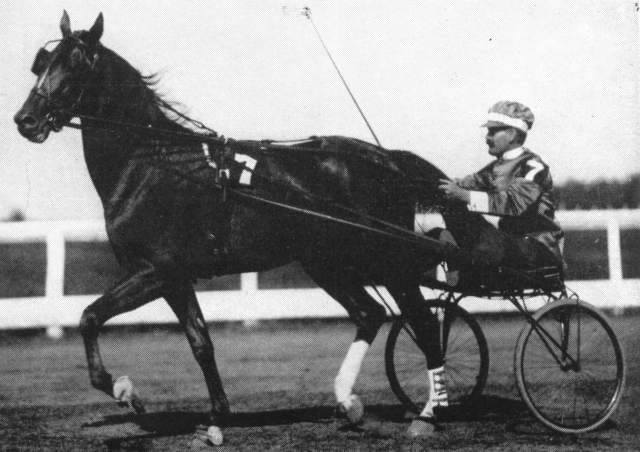