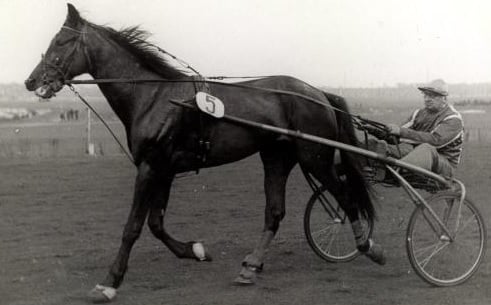 Born in 1941 at Charley Mills’ farm Gestüt Lindenhof in Templin, Ethawa was a talented trotter with a great pedigree but both the birthplace as well as the birthyear made things impossible.

While the communists raided Gestüt Lindenhof, Ethawa was one of the horses NOT taken from Charley Mills’ farm toward the end of the war. Unfortunately, both his sire and his dam were however taken by Soviet soldiers and never seen again.

Ethawa was used at stud in West-Germany after the war and was a decent stallion, though nothing special. He’s found in horses like Rambo Corner (winner 1992 Derby, 1993 Grosser Preis von Deutschland), his paternal grandsire Corner (3rd 1979 European Championship for 5-year-olds) and Chouchou des Dames (second 1999 German Derby)

The picture is most likely taken in 1944. Charley Mills up.