Googoo Gaagaa – is more than a breeding curiosity 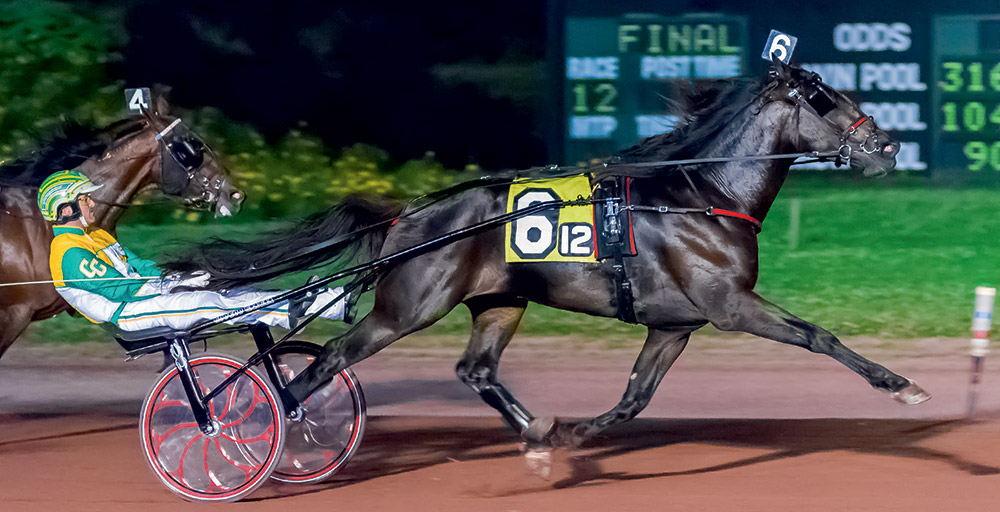 I am sure that my Norwegian friends will wonder why I am writing about an oddly named horse familiar only to racing fans on the eastern shore of Maryland (US). Googoo Gaagaa established a 2YO trotting colt World Record of 1:56h taken at Ocean Downs, a tiny ocean resort track. To date, Googoo Gaagaa has won all six of his lifetime starts at Ocean Downs in the Maryland Sires program with earnings of $38,512. His last three starts have been won by a combined 90 lengths, and his 1:56h win found him ahead by an incredible 41 lengths. Holy Secretariat! Well, maybe I exaggerate. Nevertheless, this is an impressive young horse.

What is his breeding? His sire is Cam’s Rocket p,3, 1:52 $234,164 (Cam’s Card Shark – Queen of Rock – Meadow Skipper), who has stood a leisurely stallion career for six years in Illinois and Maryland. Cam’s Rocket won New Jersey Sire Stakes races at 2 and 3, and his most productive year was at 5 when he won $80,000 in Invitationals and Opens at small Midwestern tracks. To date, Cam’s Rocket has sired only 23 pacing starters, 3 of which have taken a record of 1:55 and won a collective $353,009.

Plus one trotter, Googoo Gaagaa. Here is his pedigree:* 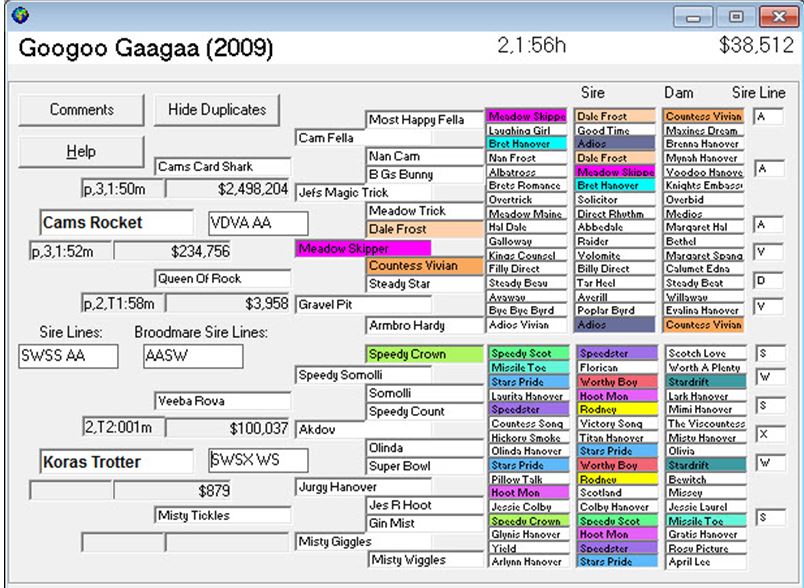 His dam is Kora’s Trotter 4, 2:02.1f ($2,229), winner of one of eleven lifetime races. By the Speedy Somolli stallion Veeba Roba out of the Jurgy Hanover (finally, a horse I know!) dam  Misty Tickles, Kora’s Trotter would not be described as a broodmare with commercial appeal.

Her first two foals were by trotting stallions. Rosy Picture by Broadway Hall took only a 2, Q2:03.3f record and earned no money. My Baby Momma by Tejano is a very good filly. My Baby Momma is currently three, and is also a star in the Maryland Sires program at Ocean Downs. Her lifetime mark is a respectable 3, 2:00h with $50,665 in earnings, racing entirely in Maryland where good purses are scarce. This year, My Baby Momma is 11 – 6 – 1 – 0 and has earned $38,069, with 5 wins and 1 second in the Maryland Sires program.

Plus Googoo Gaagaa. How did this happen?

When we examine the tail female line of Kora’s Trotter, we are surprised to find her seventh dam is the immortal Rosalind TT 1:56 3/4. Rosalind is also the sixth dam of Fern 4, 1:52.3 ($1,245,502); and fifth dam of Ohyouprettything p,3, 1:50.4 ($1,279,368), dam of Jereme’s Jet  p,4, T1:47 ($1,519,321). Rosalind is therefore a direct female ancestor of both great trotters and pacers. The tail female line eventually leads to the great Nervolo Belle, dam of Peter Volo who was the sire of Volomite. We also find that the third dam of Kora’s Trotter, Misty Wiggles, was by the obscure stallion Yield, whose fourth dam is also Rosalind! Misty Wiggles was therefore 5×4 to the great Rosalind in her tail female lines. Distantly, Kora’s Trotter’s tail female line shines brightly with the progenitors of the Volomite sire line.

But what about this crazy pacing cross? In my previous blog titled “What Is An Outcross Breeding?”, I talked about the limited trotting stallion lines in North America, and how pacers might be an unusual but theoretically useful source of outcross bloodlines. I thought Volomite might be an important “bridge” because this bloodline is still shared prominently by both trotters and pacers. I mentioned that pacing stallions with prominent Volomite bloodlines such as Rocknroll Hanover and Somebeachsomewhere might be candidates for outcross experiments with trotting broodmares.

In an interview published on page 30 of the August 31, 2011 edition of The Horseman and Fair World Magazine, his breeder Richard Hans explained that the mating was one of convenience: “We sent the mare to New Jersey to be bred to a trotter, but she didn’t get in foal. We brought her back here and since breeding season was over and we have Cam’s Rocket here on the farm, we bred her to him. I was afraid he would be no good anyway. I owned the mother and she would just hit everywhere. But he would trot so clean and always stayed flat. He can just really go. He’s perfect – the best horse I’ve ever been around. He’s not a gelding because he’s always so well-behaved.” Unfortunately, Mr. Hans also reported that Kora’s Trotter has since died. There will be no more brothers or sisters to Googoo Gaagaa.

Perhaps the success of Googoo Gaagaa can be explained by a reawakening of the greatness of the tail female line of Kora’s Trotter from which came the Volomite sire line, and the outcross bloodlines of a pacing stallion with a maternal family highly inbred to Volomite. What would happen if top rated pacing stallions like Somebeachsomewhere or Rocknroll Hanover with significant Volomite bloodlines were mated to well bred trotting mares? The success of a modestly bred horse like Googoo Gaagaa makes me want to know the answer more than ever.