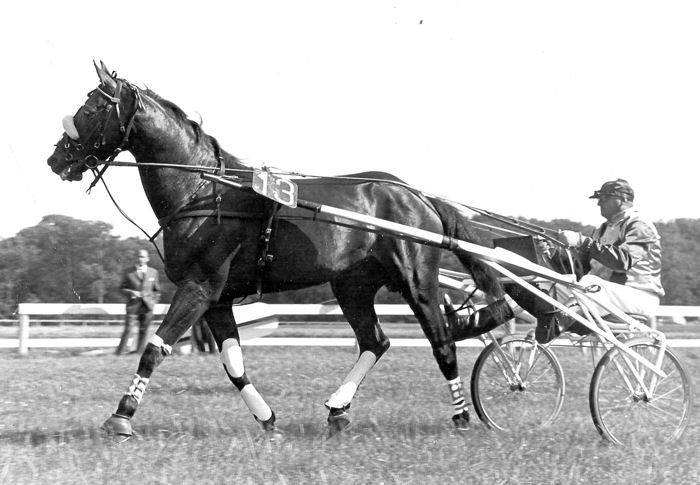 It’s hard to find a later bloomer than Hairos II. For many years he was an above average trotter, though clearly well below the best in his crop. Hhe failed to win any of the top races for his crop in his youth and although he was a decent aged trotter, he was nothing special for a long time. In the 1958 Prijs der Lage Landen in Duindigt in the Netherlands, he finished fourth around 10 lengths behind Icare IV who narrowsly beat Jamin. But Dutch trainer Willem Geersen clearly noticed something in the French horse that nobody else saw and inquired about the horse. Not speaking a word of French, he travelled later that month to Paris with Belgian trainer Adrien D’Haenens. Trying Hairos II at Vincennes, he did not like the shoeing and equipment: in the eyes of Geersen the shoes were too heavy and he wore too much equipment. Thinking there was much improvement to be had simply by making some equipment changes, he bought him on behalf of one of his owners, Andries Voordouw. The fairytale story was just beginning.

In preparation for the Prix de Washington, Kruithof and Geersen removed what they considered unnecessary equipment, put on lighter shoes with an open toe and changed the harness. Just a few days later Hairos II shocked everybody by winning the Prix de Washington in 1:15.9/2:02.1 on Enghien, making him the 3rd fastest European-born trotter by then (behind Tornese and Jariolain). The previously very average horse was suddenly the fastest trotter in France, a feat which many thought was just a one-time fluke. However, by winning the Prix d’Europe later that month and then winning 3 major races in Germany (Preis von Besten, Preis von Deutschland and Gladiatoren Rennen), Hairos II established himself as a top trotter in short time. Making a start in Paris in December that year, in preparation for the top races that would come later that winter meeting, he finished third and was clearly not at his best. After the race he had problems walking and a check-up revealed a massive inflamation.

After intensive treatment where they burned the leg to treat the inflammation (not uncommon before), and more than half a year off the track, Hairos II returned to the track in Holland, winning easily in Mereveld in Utrecht. The 1959 Prijs der Lage Landen was another fairly easy win, defeating Jamin (who admittedly had to start 20 meters behind Hairos II). Back at Enghien he won the Prix de Washington again but even more notably he trotted 1:13.4/1:58.1 in a record attempt over 1 kilometer (5/8th mile). Finishing the year in 17-1-1 in 22 starts, Hairos II was seen as one of Europe’s best trotters and was one of the early Prix d’Amerique favorites. But after finishing far back in the Prix de Bourgogne on a heavy track, many questioned whether the Dutch-owned horse could handle the hill of Vincennes (back then the uphill was much more marked and demanding than it is now). With two-time winner Jamin still among the favorites despite a 50 meters handicap (because of rules giving previous winners 25 meters extra pr win), Italian chestnut Tornese, French star Icare IV, and newcomer Liebelei (winner of the Criterium des 4 ans the previous year) were considered the other favorites while Hairos II paid 437 for 10. Even Geersen was skeptical, hoping for a top 5 finish. But Hairos II made it to the front relatively early and kept the lead all the way, despite Tornese closing him down in the final stretch, in the end winning by little less than half a length. Winning in 1:21.3/2:10.4 over 2600 meters (1 10/16th mile), Jamin put in a strong performance to finish third by trotting in 1:19.9/2:08.3 over 2650 meters to finish third. (Jamin’s time was the first time the 1.20 barrier was broken in the Prix d’Amerique.)

Later that year it would be Hairos II who would suffer from having to run the extra distance as he only finished third in the Elitlopp, having to start 20 meters behind the rest, losing to Honore II, another Frenchman. But he would be back in the international limelight later that year in New York in the second edition of the International Trot. Before the race, Geersen was very confident of winning and had no qualms about showing it – so much it became a bit arrogant, really. As presiding judge John Cashman called the drivers together before the race to explain the rules, Geersen was clearly disinterested. It was only when Cashman explained the procedure for the winning horse and driver, that the winning driver would return his horse to the paddock after the ceremony and would then be taken to the press box for interviews, that Geersen seemed to come to life: «Who will take my horse and where is this press box?» he asked through an interpreter. The US trotting fans considered him more of an outsider and Hairos II paid 59.5 for 10 to win, an odds almost identical to what Jamin had paid the year before. It probably didn’t help that Geersen was a big man of more than 130 kgs (260 pounds). Despite being parked outside of Italian Tornese the whole race, Hairos II won a relatively comfortable victory, winning in 1:16.6/2:02.3 (the distance was 1 1/4 mile or 2011 meters) in front of more than 58000 spectators. The 1960 campaign ended with an impressive 20-5-1 in 30 starts and recognition as the top aged trotter in the world.

As a 10-year old season started, however, it was clear that 8 seasons on the track, and 173 starts, was taking its toll. Already suffering from bad feet, he «only» made 16 starts, winning 9 (of which 8 were in the Netherlands) and the remaining win in the Otto Klosz Rennen at Hamburg-Bahrenfeld. He had to accept losing the French crown to young mare Masina and he failed to win any races on French tracks that year. The next year he could only manage 3 starts before Willem Geersen put a stop to his racing career which then stood at 192 starts with a 64-14-20 record and a personal best of 1:15.8/2:02 and total earnings of 328 135 euros. For Geersen he won 49 of 73 starts.

He stood stud in the Netherlands and Germany before being bought by French breeder Jean Clerx in 1969 and he stood stud at the Haras du Pin from 1970 to 1974 before passing away in 1979. He did not do too well at stud and even though he sired a few good horses, his long-term impact is as damdamsire of Biesolo. He did, however, sire Esquirol who in turn sired Poroto who earned over 1 million euros in the 1980s. 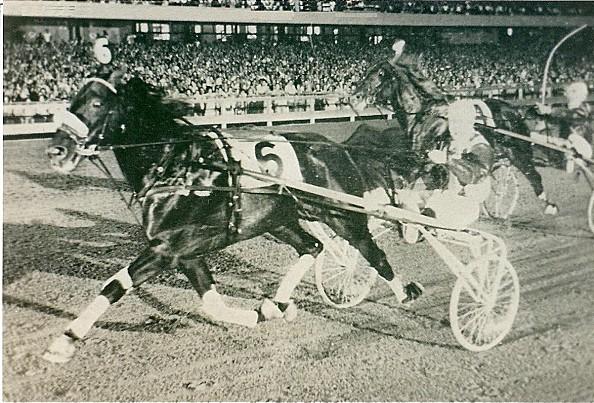