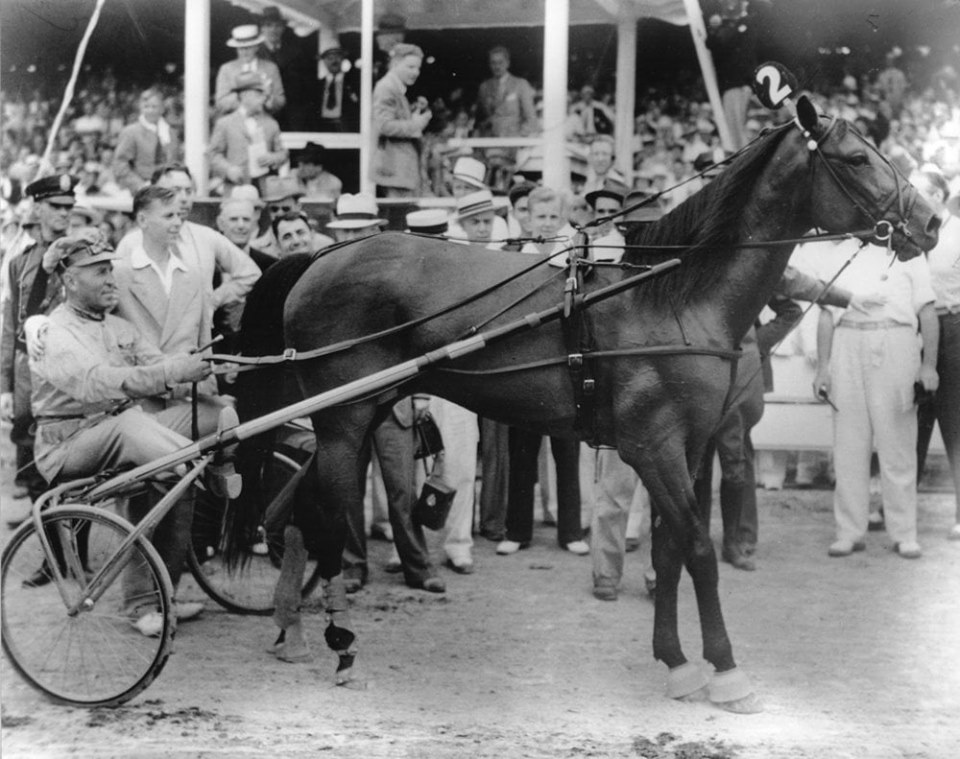 Despite failing to win a single race at 2 and only a single heat at 3, Lawrence Sheppard had no worries forking out a cool $20000 for McLin on August 1, 1938 – a mere 9 days prior to the Hambletonian (with a further $5000 payable if the horse won the Hambo). McLin had shown tremendous ability but also bad manners and immaturity. The single time he had stayed on gait he had won a heat in the American Stake easily, ever other time he broke stride.

Sheppard had won the previous year with Shirley Hanover and wanted more success. But when it was apparent he had no Hambletonian contender in his own stable he simply bought McLin. McLin’s turnabout must surely be one of Henry Thomas’ biggest masterstrokes. In the Hambletonian gone was all juvenile behavior and manners and the newest addition to the Hanover stable won easily. (His name was still «McLin» as the name was changed after the Hambletonian win but, I guess for practical purposes, the horse is referred to as «McLin Hanover» even during the Hambo win in all online documents. It would probably cause confusion otherwise.)

After the win Sheppard declared that «He is not the trotter that Shirley was or is but I sure got a lot of contentment out of that victory.» Sheppard or Thomas surely didn’t realize yet how talented this trotter was. A week later, however, McLin Hanover showed himself way better than Shirley Hanover ever was as he won in 1:59 1/4 at the Illinois State Fair. The time was the fastest for a 3-year-old in a race and best second heat by a three-year-old trotter. (Protector had earlier trotted the same time in the second heat of the 1931 Kentucky Futurity while the fastest time overall by a 3-year-old was Dean Hanover’s 1:58 1/2 time trial.)

He then won the Horseman Futurity and took home the Kentucky Futurity in impressive fashion. In the second heat he broke early but Thomas guided him to the front at the half-mile post and hung on for the lead, trotting the final quarter in 28 1/2. Then it was time for the fast colt to really show what he could do. After all, it was after all Hanover’s practice to time trial everything in the stable when they got to Lexington. Many years later Dick Thomas estimated that «I think McLin Hanover would have trotted in 1:57 or better. His speed was unbelieveable. He trotted eights in 13 1/2 seconds.»

For good measure, just a week after his Kentucky Futurity win Sheppard sold McLin Hanover for $25 000 to Count Paolo Orsi Mangelli. On the slower European tracks Dean Hanover’s record was safe for a few more years… McLin Hanover had big shoes to fill as it was hoped he would emulate Muscletone’s feats. While Muscletone had ability and excellent timing, McLin Hanover had probably as much ability but terrible timing. He completely dominated in 1939, winning the two biggest non-French races at the time, the Campionato Europeo in Italy and Matadoren-Rennen in Germany. In the latter race he won in 2:03.4, one-tenth off Muscletone’s race and track record and only three-tenths of the European record held jointly by Muscletone and Tara (the US-born Volomite daughter).

Vestone is a funny one. A very talented trotter, he ended up in Argentina (Martín Parola, do you know anything about this trade?). If one look at the pedigree of pacer Chucaro Art Surco he’s found in the 7th generation on the maternal line…

Picture 3: Sovrano – with a very young Mario Barbetta – pulls off a shocker by defeating the usually superior Orsi Mangelli duo McLin Hanover and Floridoro in the Premio dell’Impero at Bologna in 1941