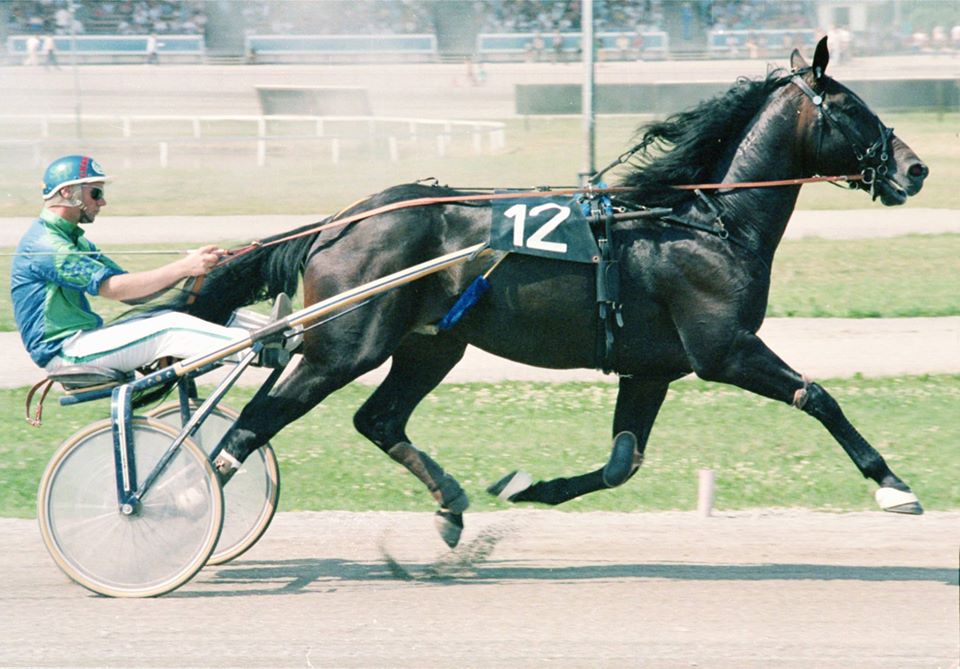 After retiring at the end of 1972, Italian star Agaunar stood at at Pine Hollow but proved a tricky broodmare. In fact, the big chestnut mare (174cm / well over 17 hands), only had two foals. In 1975 she gave birth to a daughter by Songcan named Misty Sister. Misty Sister didn’t race and was instead bred to Bonefish at 3. Three years later another filly, Bam Bam Viking, by Songcan’s arch-nemesis Super Bowl, saw the light of day. Bam Bam Viking ended up in Germany. Her short racing career consisted of only 4 starts although she won 3 of those. Bam Bam Viking had 10 foals in Germany but failed to produce much quality. Only the 2:02.1 gelding Nothing Compares, by Mack Lobell, showed any kind of ability and he «only» made around €41 619, slightly less than $50 000 lifetime.

Misty Sister, on the other hand, proved a formidable broodmare. After giving birth to a colt by Bonefish in 1979, she then delivered two excellent fillies. In 1982 came Intact, by Netted and the following year Newmarket by Pershing (the latter often referred to as «Newmarket S» in the US). Intact won Stochampionatet («the filly championship») and Drottingpokalen («the queen’s cup/trophy»), two of the biggest races for 4-year-old fillies in Sweden, and finished second behind Jet Ribb in the Swedish Trotting Derby (open class). Intact had 10 foals – all started and all were winners! She didn’t produce any stars but her daughter Sweet Sound (Spotlite Lobell) did, her 2003 foal Glen Kronos (Enjoy Lavec) won the Italian Derby, E3 and Gran Premio Citta di Napoli in 2006, was second in the 2009 Nat Ray etc, and earned close to 1 million USD lifetime. Another foal, Nice Kronos (Viking Kronos) is the dam of Fort Knox (Muscle Hill), one of the better three-year-olds in Sweden this year.

Intact While was good, Newmarket was excellent. Brought to the US by Wallner and Lindstedt as a yearling, Newmarket was one of the best mares in the 1983 crop. She won the Arden Downs at both 2 and 3, finished second (to Jef’s Spice) in the Hambo Oaks and won divisions of the Coaching Trotting Oaks and the Hudson Filly before she returned to Europe at 4. There she won the Gran Premio Continentale and finished third in Stochampionatet, Gran Premio Costa Azzurra (losing to March of Dimes trotter Esotico Prad) and Sweden Cup.

Newmarket’s maternal grandaughter Sweet as Candy (Smasher) honored her grandmother by winning both Drottingpokalen and Stochampionatet in 2000. Sweet as Candy is herself grandmother to the 9-year-old Reckless (Ready Cash) who still is one of the better aged trotters in Sweden over longer distances.

Misty Sister also produced a few other decent trotters including On The Rail (Kosar) and Always There (Sugarcane Hanover) and was awarded the prestigious «Elitsto» («Elite mare») honor bestowed on the best Swedish broodmares by the Swedish standardbred breeders association ASVT.

It was, however, Misty Sister’s hitherto undiscussed son by Bonefish who would turn out to have massive historical impact. The colt, named Mickey Viking, was imported to Sweden as a yearling by breeder-owner Ulf Berner and entrusted to trainer Stig-H Johansson. The colt could not compete with the very best in the class of 1979 but was still a very nice trotter. At 4 Stig-H Johansson took him to Enghien (the second track in Paris) where he won the Prix de Milan, defeating good trotters such as Noble Atout and Natacha du Buisson.

His owner Berner had been a successful businessman with a lavish lifestyle and had several trotters trained by Stig-H Johansson (the best known is probably Thor Viking, third in the first heat of the 1980 Hambletonian – behind Burgomeister and Nevele Impulse – before becoming a successful trotter in Europe). However, in 1983 Berner’s company went bankrupt. As the company seemingly had paid for much of Berner’s private expenses the Swedish government did a thorough audit of both the company books and his private finances. Demanding 13 million SEK (roughly 1.5m USD) and considering criminal prosecution, the government confiscated his passport but Berner still somehow managed to flee the country with several of his horses. Berner was a famous, or infamous, person in Sweden and several documentaries were made about him, but I won’t go deeper into that part of the story here.) In France, Berner sold Mickey Viking in January 1984 to a group of French owners led by one of his friends, the French trainer Jean Louis Peupion. Peupion made a name for himself as the trusted groom of Une de Mai but was also a very good trainer and was French champion trainer in 1984 and 85. At that time he trained aces such as world champion Minou du Donjon, Prix d’Amerique-winner Lurabo and Ogorek, winner of Oslo Grand Prix, Prix Rene Balliere and Criterium Continental (defeating Ourasi). Peupion struggled with Mickey Viking in the beginning as the trotter broke and was disqualified in each of his three first starts but then things started to come together a bit and four starts at Enghien, his favorite track, yielded 1-1-1-1 (in eight career starts at Enghien he always finished in the top four). In the first of those four races he trotted his fastest time when he was third to Landoas and Joli Quito in the Prix de Washington in 1:13.6km/1:58.3s.

Peupion’s decision to buy Mickey Viking was not a purchase to help a friend, however. He had seen Misty Sister and Bonefish on his trips to the US and thought highly of both, he had been impressed by Mickey Viking when he saw him win at Enghien in 1983 and also thought the world of his pedigree. In the 80s a few French breeders and owners started breeding and racing trotters with non-French pedigrees, i.e. horses that didn’t quality for the French stud-book. This could be a tricky thing as such foals are ineligible for most races in France and they had to be registered in another country. The Peupions (his wife is Swedish) had considered this, but then toward the end of 1985 Jean-Lou got a «crazy» idea. Sensing that Mickey Viking’s career was slowly coming to a natural end, Peupion approached the people at the French national stud with his idea: would they consider buying Mickey Viking and have him stand stud there?

The idea was crazy because the French stud-book was closed to foreign stallions. It had been opened in the 70s to Florestan and his brother Granit but those were sons of the French trotting queen Roquepine – and Mickey Viking could boast no such connection even though Agaunar’s sire was half-French. Despite being limited to few mares, Florestan had already started the revolution and sons like Off Gy, Opus Dei, Passionnant, Podosis and Pythagoras were already racking up big wins by 1985. Additionally, Mickey Viking’s pedigree was tremendous. Surely, Peupion argued, the French trotter could only improve by admitting Mickey Viking? To outsiders it must have seen a futile proposition: a few years earlier Allaire and Moncorge had approached the national stud with an idea to buy Pershing, a trotter with a very good pedigree but much better career, and let him stand stud in France. They had been met with derisive laughter and the idea had been shot down immediately. Occasionally it is not what is suggested, but rather who suggests it, that matters and maybe good old fashioned personal bias was at work. Regardless of what happened, Peupion was quite surprised when the national stud didn’t take too much convincing – altough it surely played a part that another of Mickey Viking’s French owners was a very influential person who pulled some strings… Around that time the French national stud was, at least in theory, there to carry out rules and policies. But in reality the national stud had a large degree of autonomy and authority. If they wanted something, then often got it. After Mickey Viking won his final race, the Prix de New York at Enghien in August 1985, there was no way back. When the national stud, despite no formal authority, decided that the French stud-book rules should be changed and Mickey Viking allowed to stand stud in France, that was the end of the discussion.

With a 13-10-5 record in 48 starts and a CV weaker than almost all other French stallions, Mickey Viking entered French stallion ranks in 1987. His French stallion career would unfortunately be very short. Limited to 50 mares, he covered 48 mares in his first year and 30 foals were born the following year. By that time their sire was no more: in January 1987 Mickey Viking had to be put down because of a brain tumor. Still, the group of 30 joined Florestan’s get in their ongoing revolution. Of his 30 foals, 28 (a massive 95 %) qualified and 24 (80 %) started at least one race. 5 horses earned classical or semi-classical honors, i.e. were top-3 in a group 1, 2 or 3 race and 5 (four or these were the classical or semi-classicals mentioned above) horses earned more than €100.000 (roughly $110 000). No matter how you look at it, Mickey Viking’s small crop was fantastic. The mare Volga Brillouard earned €381 641 (around $400000) but it was a talented yet injury-prone son with terrible feet, Viking’s Way, who would transform his sire’s excellent start at stud into the most dominant sireline in Europe today.

The timing of these articles probably aren’t the best because of the Hambletonian so I’ll wait until Monday with posting the last article (as some have already pointed out, it is on Viking’s Way and his absolutely massive influence, although I’ll also detour on how Mickey’s death opened up for a high-price purchase from the US).