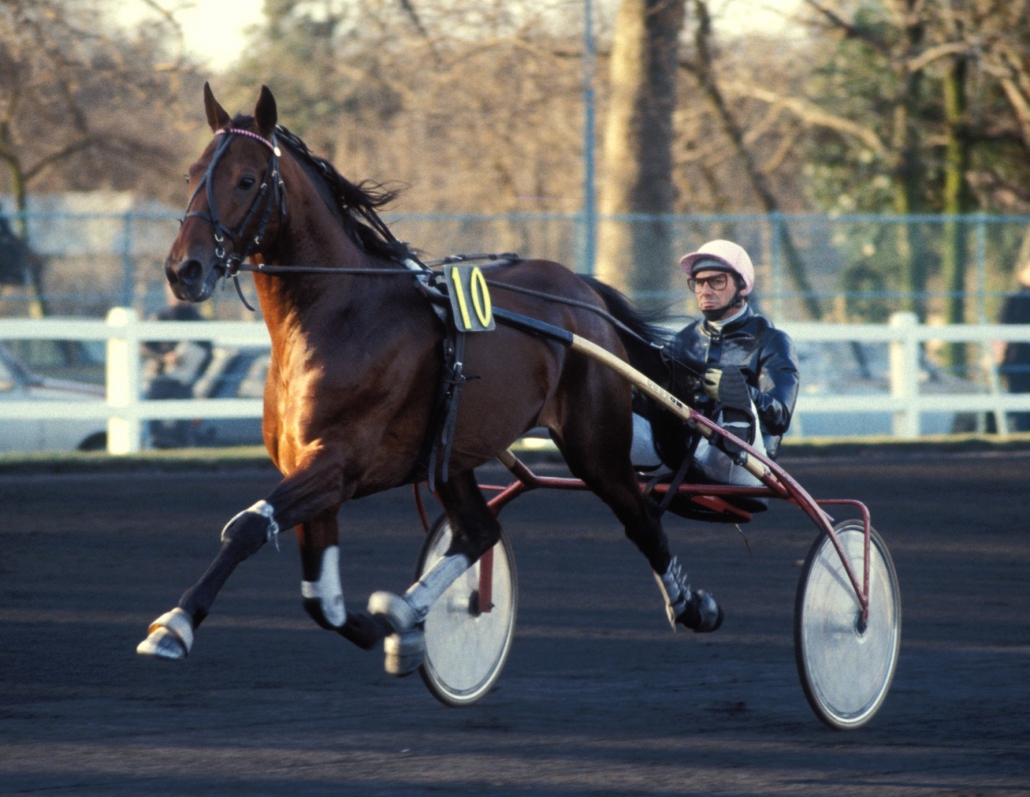 In the mid-80s Mon Tourbillon was one of the top aged trotters over shorter distances. The super speedy French colt certainly lived up to his name (it translates to «My whirlwind») as he sat a world record at Solvalla in 1985. A Viel-product through and through, Mon Tourbillon was owned by father Albert Viel and trained and driven by son Jean-Pierre Viel. The Viel family is omnipresent in French trotting history. The family dynasty was founded by the older Albert Viel, born 1854, who established himself as a trainer and breeder in 1882 in Mondeville (Caen) and it was his grandson with the same name who owned Mon Tourbillon – and many other trotters – and also chaired the French trotting association from 1974 to 1985. (In the last stage of cancer, he was hospitalized in Caen and forced to watch the 1997 Prix d’Amerique on TV – it must have been very emotional for him to see Abo Volo fulfilling the family ambition of finally breeding and training a Prix d’Amerique winner. Albert Viel passed away shortly after.)

«It was oh so easy for him» said Jean-Pierre Viel, trainer and driver, about Mon Tourbillon’s early days. The talent visible for all to see, Viel’s only concern was his hooves. Because of this he did not want to rush his prized possession, hence the debut did not take place until mid-season when he was three, on June 13, 1981. In his debut he finished second to Marco Bonheur, another Viel trotter, in Graignes. He then won in Caen and moved to Vincennes where he starting stringing victories together. Only a gaffe in the Prix Victor Regis, where he broke for no apparent reason in the final stretch, prevented him from 8 straight wins. Though he was disqualified in the Prix Abel Bassigny in the beginning of December, bettors made Mon Tourbillon the favorite in the biggest race for French 3-year-olds, the Criterium des 3 ans, a few weeks later. But again another Viel trotter, this time Moktar (driven by Jean-Pierre’s brother Paul), narrowly beat him by a nose. He got his revenge on Moktar, and the rest of the French 1978 crop, three weeks later by winning Prix Charles Tiercelin but Viel noticed his sore feet were bothering him and instead of starting again that winter meeting he gave his talented trotter three months off.

Returning in April, he was second to Minou du Donjon in Prix Gaston Brunet and again to Marco Bonheur in the Criterium des 4 ans (which was very impressive given that a hoof abcess prevented him from being trained much ahead of the race) before winning Prix de Milan and Criterium Continental, firmly confirming his credentials as one of the best French M-trotters (i.e. the crop born 1978), and five more races with without a win at the end of the year did not change that perception. One of those races, the Guldskon at Vermo, Finland, proved that Mon Tourbillon was one hell of a trotter – and that Jean-Pierre Viel had a thing or two to learn about driving tactics. From post 7 he ended up three-wide in the first turn. Jean-Pierre elected to stay three-wide for the whole race (2100m on a 1000m racetrack, that is, 1 5/16th mile on a 5/8th racetrack, i.e. 4 turns) and eventually had to settle for third behind Danish star Ejnar Vogt and Swedish trotter Rex Håleryd. But almost everybody felt that Mon Tourbillon was clearly the best and that his toughest opponent that day was his own driver.

Despite giving a 25 meter handicap to the rest, Mon Tourbillon started off 1983 in best possible fashion, winning the Prix de Croix several lengths ahead of Minou du Donjon and Moktar. A few weeks later he finished a credible seventh in the Prix d’Amerique, won by Ideal du Gazeau ahead of Lurabo and Lutin d’Isigny, over 2600 meters (1 5/8th mile). While his opponents there excelled over the longer distances most common in France, Mon Tourbillon was more speedy and strong and «only» won 5 of his 29 lifetime starts over 2600 meters or longer. He proved himself the outstanding trotter over shorter French distances (2100m / 1 5/16th mile) by defeating the elite three times in a row, taking home Prix de France (defeating Lancon, Ianthin, Ideal du Gazeau, Keystone Patriot, Lutin d’Isigny, Snack Bar etc), Prix de Selection and Prix de l’Atlantique. After going 6-3-4 in 16 starts, he was at the tender age of 5, already firmly established as the top French trotter over shorter distances.

With a «French» pedigree (the Viel family had no interested in mixing in US blood: something which has been very detrimental to their breeding operations in later years), Mon Tourbillon’s lighter type and speedy disposition might come as a surprise but there is quality in his genes. His sire Amyot was a very good trotter, especially over shorter distances, winning the Lotteria in 1972 and finishing second in the 1974 Elitlopp. Interestingly, Marco Bonheur and Mon Tourbillon’s dams were out of full sisters Lola and Katie Bonheur, them being out of Rosa Bonheur, a very good mare who was one of the better French trotters in 1944 and 1945, winning the 1944 Prix de l’Etoile and finishing second in the 1945 Prix d’Amerique (or, technically, the Grand Prix d’Hiver as it was called then).

1984 proved a so-so-year; he was top-5 in almost all the big races but only mustered one win in 15 starts. A trip to Sweden produced a fourth-place finish in the Elitlopp and he was also second in Preis von Bayern in Germany. The win deserves some mention, though, as Mon Tourbillon, despite a 25 meter handicap, won comfortably over Minou du Donjon and the up-and-coming superstar who would turn out to be his arch-enemy in 1986, Ourasi.

In 1985 the Viel trotter came back with a vengeance. He started the year by winning the Prix de Belgique (in a dead heat with Minou du Donjon) before finishing second to Lutin d’Isigny in the Prix d’Amerique. Back on a shorter distance he had no problems disposing of all challengers to again win the Prix de France, and in Cagnes-sur-mer he took home the Grand Criterium de Vitesse ahead of Lutin d’Isigny, Minou du Donjon and The Onion (the pedigree nerd will also get a kick out of Mickey Viking, one of the most important stallions in French history, finishing fourth ahead of The Onion). When the whirlwind trotter also took home the Prix de l’Atlantique, Viel felt good about taking his star trotter abroad again.

The 1985 Elitlopp was to be a duel of French speed (Mon Tourbillon) and strength (Minou du Donjon) against Swedish technique (The Onion and Meadow Road). The French superstars were separated and Meadow Road and Minou du Donjon were to meet in the second heat while Mon Tourbillon would take on world record holder The Onion in the first heat. The draw was anything but favorable as the two favorites being given posts 7 and 8 respectively. Viroid and Anders Lindqvist forced a high tempo and moved to the lead with a lap to go but almost immediately relinquished it to The Onion, which in turn meant Mon Tourbillon had to travel first over for the entire last lap. This didn’t bother Viel or his star, though, and down the final stretch they easily took down The Onion and held off Mikado C to win in 1:11.9 / 1.55.3f, a new world record for aged trotters on a 5/8th track.

So how long was Mon Tourbillon and Viel in world record heaven? As it turned out, not very long, because in the next race, Minou du Donjon lowered the record to 1:11.5/1:55f, in large part thanks to the murderous tempo set by Matine and Johnny Takter. In the final Mon Tourbillon got a perfect position second over, comfortably positioned behind Minou du Donjon but he ran out of steam and finished fourth. Meadow Road finished strongly from third over to win in 1:11.6 / 1:55.1f.

The French pair had impressed enough to earn a trip to the US, though, and Mon Tourbillon was second (1 1/2 mile) and third (1 mile), both times to Meadow Road, in the 1986 Statue of Liberty trots. While he had been good before, he was clearly better than ever and could 1986 be the year where he would taste Prix d’Amerique glory?

As it turned out, Mon Tourbillon’s 1986 campaign could just be called «when I was second to Ourasi every freaking race…» He had the «pleasure» of being second to «Le roi fainéant» in the Prix d’Amerique, Prix de France, Criterium de Vitesse, Prix de l’Atlantique … even in the Prix Rene Balliere – when Viel colluded with a lot of other French drivers to cheat Ourasi out of a win – he failed to win. The loss to Ourasi in the Rene Balliere was not easy to swallow given how a small mistake gave Ourasi an opening he wasn’t supposed to have.

His only win in 1986 came in the Prix de Washington at Enghien where he had no problems beating good horses such as Noble Atout and Ogorek (and for the pedigree nerds; the list of starters also included Somolli Ribb, Commander Crowe’s maternal grandmother). More than 70 starts at the highest level was starting to manifest itself and when Mon Tourbillon failed to win in any of his 8 starts in 1987 and 1988 he was retired to stud.

With 8 group 1 wins to his name he is firmly established among the better French trotters in history. Since he failed to make a huge impact at stud he is, however, somewhat forgotten when we talk about French stars of the 80s. But many of his daughters did well at stud and he is the damsire of horses such as Gai Brillant, Severino, Himo Josselyn and Jasmin de Flore.

Mon Tourbillon passed away in 2001.

Note: I referenced a very special incident in the 1986 Prix Rene Balliere, won by Ourasi, above. I will post something about that after as it is truly unique