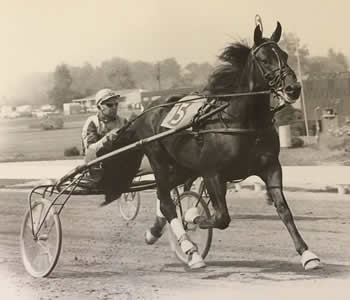 I will never forget the first time I saw Nevele Pride.

It was at the Illinois State Fair in the summer of 1967. It was a hot August day with the typical Midwest American humidity making people at the fair seek shade and ice-cold drinks.

I was 17 years old and I had spent June and July working at Walnut Hall Farm in Kentucky, about 150 kilometers from my parents’ home in Cincinnati, Ohio. I drove from Ohio to Illinois to see some Grand Circuit racing action before starting my first year in college.

I was standing on the backstretch of the track when trainer-driver Stanley Dancer pulled up his wunderkind colt Nevele Pride after a warm-up mile. A young couple stepped onto the track. The lady was wearing a lovely dress and the man a business suit, making them totally out-of-place among casually dressed fairgoers. They were New Yorkers and among the owners of Nevele Pride. “Oh, Stanley! Oh, Stanley!” the lady said. “If Nevele Pride breaks the world record this year, I’ve been promised a new mink coat.” The great horseman quickly and calmly replied, “Don’t worry—you’ll get your mink coat.”

At that time, the fastest a 2-year-old colt had trotted was a mile in 2:00. That honor was jointly held by Scott Frost and Noble Victory. Dancer had trained and driven Noble Victory. Nevele Pride almost got the world record that hot afternoon in Illinois. He won the first heat in 2:00-2/5 and the second heat in 2:00-1/5. Both times he won by many meters and yet he was under a heavy whip all the way to the wire. Nevele Pride had easily beaten his four-legged rivals, but Dancer was intent on getting the world record. He came close, very close. And his reward was to get sick after those two heats and miss his next start in Chicago. Two weeks after the race at Springfield, Nevele Pride was back in action and he established a new world record of 1:58-4/5 for 2-year-old trotters.

My first exposure to Nevele Pride told me that he was a horse of iron to take brutally hard races and then come back for more of the same. And he did that all of his career. I saw him race several other times and he amazed me with willingness to race his heart out week after week after week.

In early 1969, his trainer and driver Dancer was speaking to horseman at a banquet in Indiana. Dancer told them that he would bring Nevele Pride to the Indiana State Fair in seven months and break the 1:55-1/4 all-time trotting record set by Greyhound 31 years earlier. Dancer was even bold enough to predict a time. He said he thought Nevele Pride would trot a mile in 1:54-3/5. What horseman dares to predict how fast his horse will go seven months in advance? Nevele Pride came back to Indiana in seven months, as Dancer promised, and broke Greyhound’s 1938 world record by trotting in 1:54-4/5.

Nevele Pride was amazing on the track. He won 57 times in 67 starts and was voted Horse of the Year in North America each season he raced. After he broke Greyhound’s record, it was announced that Nevele Pride had been syndicated into 50 shares at $60,000 each, making his total value in 1969 at $3 million. It was an astonishing price, but Nevele Pride was an astonishing horse. His syndicate price was 50 percent higher than the $2 million paid for the pacer Bret Hanover, a winner of 62 times in 68 careers and—like Nevele Pride—voted Horse of the Year each season he raced (1964-65-66).

Nevele Pride was set to begin his breeding career at Stone Creek Stud in Paris, Kentucky, just northeast of Lexington. It has been established by the rental car king John D. Hertz as a Thoroughbred farm and Hertz stood his 1943 Triple Crown winner Count Fleet at Stoner Creek.

After Hertz died, Stoner Creek was purchased by partners Norman S. Woolworth and David R. Johnson, two young and fun-loving American trotting devotees. When they purchased Stoner Creek, they agreed to keep Count Fleet, then 24, for the remainder of his life and they also kept the farm manager Charles Kenney.
Kenney spent his career in the Thoroughbred industry and that naturally shaped his thinking. He often looked at trotting people with a jaundiced eye and he particularly did not endorse the use of artificial insemination. It was forbidden in the Thoroughbred breeding game and yet it was widely practiced in breeding Standardbreds in North America. Some stallions such as the pacers Gene Abbe and Tar Heel were breeding books of more than 125 mares per season in America, aided by the use of artificial insemination. Kenney was smart enough to know the basic law of supply-and-demand: if a seller “floods the market” with his product, prices will be lower than if there are fewer products available to buyers.

That was the way that Thoroughbred breeding operated. The stallions bred mares only by live cover and many of the best stallions had perhaps 30-35 offspring each year. But if the stallion was successful and his offspring performed well on the track, those offspring would become extremely valuable. Kenney proposed to apply that logic to the syndication of Nevele Pride. After all, he was the greatest trotter of the modern era and harness racing was flying high then. Logic said that the price for Nevele Pride yearlings would be astronomical.
Each one of the 50 shares in Nevele Pride gave the owner the right to breed one mare to him per year. If she failed to get in foal, that was a lost year. In addition to the 50 shares sold, Stoner Creek Stud was to receive six shares for keeping and advertising Nevele Pride. (Since Nevele Pride had a reputation as one of the meanest horses ever in the trotting sport in America, keeping him was not going to be easy.) So Nevele Pride began his stud career with a book of 56 mares. (A 57th breeding was later added to benefit the Harness Racing Museum in Goshen, New York. That was sold to a breeder and if the mare had a live foal, the Nevele Pride syndicate donated the $10,000 stud fee to the museum.)

Ironically, Nevele Pride first bred mares in 1970 when horse racing in America was beginning a transition. Horse racing—both gallopers and harness—enjoyed boom years starting after World War II and continuing for a quarter-century. Horse racing was among the three most popular sports in America along with boxing and baseball. But everything would soon change when New York City began Off-Track Betting. Traditionally, to place a bet on horse racing, a person had to go to the track, pay for parking, pay for admission, pay for a program—and then you could place bets and pay for overpriced food and drink.

One thing that Stoner Creek manager Charles Kenney noticed when he checked Nevele Pride’s semen under a microscope is that there was “not much action.” His semen seemed to have very few active sperm.
At the end of 1972, I was recruited by Woolworth And Johnson to come to Stoner Creek to work as assistant manager to Kenney. He was getting older and encountered some health problems and I was designated as his eventual replacement. That plan sounded good in theory, but I think every time Charlie Kenney saw me he saw the Grim Reaper. It was the young man coming to replace him. We had a good but not close working relationship. I do recall him looking at Nevele Pride semen under the microscope and saying, “This horse can’t possibly get any mares in foals.” And yet when mares were checked, some got in foal. Nevele Pride was a slow and often reluctant breeder. I remember the first mare he bred during the 1973 season. He had not bred a mare in six months and the lucky lady was a petite maiden with a fancy pedigree. She was in heat and Nevele Pride was taken to the breeding shed. He looked at the mare. He looked at some birds that were flying around. He looked at the mare. But look was all he did. He showed no interest in breeding her. Handlers tried to coax him. Nevele Pride was simply not interested. After maybe 30 minutes, the broodmare handlers were told, “Take her home. We’ll try again another time.”

Another event in late 1972 was far more important than my arrival at Stoner Creek Stud. It marked the retirement of two young trotting champs. They were named Speedy Crown and Super Bowl. They had won their Hambletonians, and Speedy Crown went to Lana Lobell Farms in Hanover, Pennsylvania and Super Bowl went to nearby Hanover Shoe Farms. Significantly both Lana Lobell and Hanover had larger and better broodmare bands than Stoner Creek Stud. Perhaps even more significant was the fact that no limitations were placed on the mares bred to Speedy Crown or Super Bowl. When I first worked at Stoner Creek, we didn’t know, of course, if Nevele Pride, Speedy Crown, or Super Bowl would be successes of failures at stud. But each morning I would ride in the darkness with one of the farm superintendents to check yearlings that had been kept up overnight in stalls. He was a foreman on the farm, and our job was simply to make sure the yearlings were okay. I remember pulling a stall door open one morning early in 1973 and looking at a handsome, robust young colt with a swollen and misshapen nose. It was almost funny. (To me, but probably not to the colt.) I don’t recall the exact problem that caused this almost a half-century ago, but I do recall how handsome the colt was. His name was Bonefish. He is the great-great grandsire of the champion French trotter Ready Cash. Bonefish was in the second crop by Nevele Pride and perhaps that swollen nose was an advantage to him because he won the 1975 Hambletonian by a nose—and never raced again. He was one of several stars from early in Nevele Pride’s career. The headliner in his first crop was Nevele Diamond, a heat winner in the 1974 Hambletonian. Two other Nevele Pride colts that were in the next crop after Bonefish were Pershing and Zoot Suit. But they attained their greatest success after they had been exported.

Also, in this era the importance of sire stakes were becoming obvious. Speedy Crown and Super Bowl stood in Pennsylvania which had a growing stakes program limited to offspring sired by stallions in that state only. By contrast, Nevele Pride stood in Kentucky which had a weak and limited sires stakes program.
Nevele Pride ctontinued to sire top trotters such as the filly Panty Raid (sister to Bonefish), Snack Bar, Messerschmidt, Tarport Frenzy and Flying Irishman, and Meadow Roland. But several of these trotters found their best success after being exported to Europe. American breeders were largely unaware of how popular Nevele Pride was in Scandinavia.

In the end, Nevele Pride was crushed by numbers. He sired 815 foals registered with the US Trotting Association while Speedy Crown had 2,207 registered foals and Super Bowl had 2,283. Nevele Pride died in early 1993, a champion whose greatness was lost by the passage of time, but anyone who ever saw him on the track will certainly never forget him.