What Is An Outcross Breeding 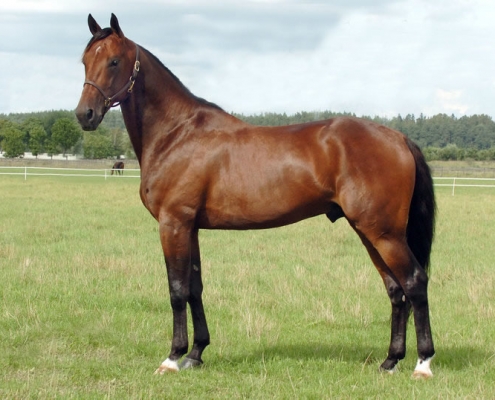 In my last blog, I explored the idea that inbred or consecutively linebred broodmares should be mated to “outcross” stallions. As I finished the article, I thought about the difficulties in defining an “outcross” breeding. North American Standardbred horses have become so inbred that our concept of an outcross will be much different from that of a Thoroughbred breeder. Thoroughbred breeders traditionally avoid common ancestors in the first five generations, usually resulting in an Inbreeding Co-efficient of 1-2% in this part of the pedigree. Such an approach is now virtually impossible in Standardbred trotters. We are now firmly on a course to additional inbreeding, whether we like it or not.

So, when we speak about “outcross” matings in our corner of the equine world, we are simply discussing matings that don’t immediately duplicate bloodlines toward the front of the pedigree.

We refer to a horse as “linebred” or “outcrossed” based upon the sire lines of its own sire and dam. However, for inheritance of traits that are not sex linked, the position of the ancestor within a single generation of a pedigree probably does not matter. Genetically, a 4×4 cross results in the same amount of line breeding no matter which positions those individuals occupy within the 4th generation of the pedigree. I personally believe that if you are going to line breed, maternal line breeding in X position may give additional benefits for any positive sex linked traits, while relative outcrossing of the main sire lines will help to preserve genetic diversity.

When I talk about outcrossing, line breeding, and inbreeding, I use Jim Harrison’s definitions from the original “Care and Training of the Trotter and Pacer”: the sum of generations of duplicated individuals is 6 or less for “inbred” matings to that individual; the sum is 7 or 8 for  “line bred” matings; and the sum is 9 or greater for “outcross” matings.

This discussion is very technical, but illustrates the challenges we face when breeding our horses. In general, we must be careful to preserve genetic diversity in our horses, and look for outcross opportunities when we can identify them. In general, outcross strategies often result in better performance when applied to an inbred population. Because of the extensive inbreeding of North American trotters, we must be alert for opportunities to promote new bloodlines. Unfortunately, commercial buyers do not often understand these issues. Breeders who take novel approaches with bloodlines may need the courage to prove their theories by racing their horses themselves. Major outcross possibilities for North American trotters could come from several possible sources:

As a North American breeder, I am interested in the pedigree of the current Swedish star Maharajah. Maharajah  has many attractive characteristics:

Perhaps Maharajah could become an interesting outcross sire for North America, if our breeders and owners can see him in action against our best aged horses?