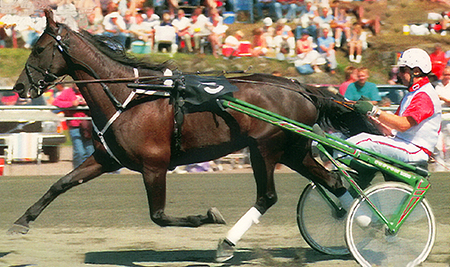 Trained in the US by Bruce Nickells, Park Avenue Kathy was good from the get-go although she didn’t win any big races at 2. She finished third in the Breeders Crown at Pompano Park (behind Peace Corps and Armbro Hinter) while she met her match in Colette Lobell and Triangle Park in the New Jersey Sire Stakes. Although Peace Corps was considered the best filly in the 1986 crop she wasn’t too far behind her. In addition to winning the Kentucky Futurity for fillies, the World Trotting Derby for fillies she also won the Hambletonian Oaks after a race-off win against Peach Pit. In the Breeders Crown she again finished third, this time to Peace Corps and Peach Pit. The Hambo Oaks win came after Bruce Nickells surprised many by switching shoes right before the race. «Before the race-off in the Hambletonian Oaks, I switched shoes on Park Avenue Kathy. I went from a steel shoe to an aluminum shoe in the paddock right before the race. A lot of owners wouldn`t have appreciated a switch like that before a big race without telling them. But Lou understood I was doing what I thought was best as his trainer.»

Bought by Berne Gustavsson of Sweden and put in the training of Göran E Johansson, Kathy went to Europe as a 4-year-old. Like some she struggled a bit when going up against older trotters for the first time and she did not win any of her 7 starts as a 4-year-old and the gap was particularly visible in the Fina Cup (one of the biggest races for aged fillies in Europe at the time) at Biri in Norway when, despite finishing third, she quite couldn’t keep up with Peace Corps and Nealy Lobell, the latter setting a new world record for aged mares with 1:55.3f

But one year to acclimatize was all that was need and although she started 1991 a bit slowly she got better and better while traveling more than a busy salesperson. The season stats shows that she was 10-3-4 in 21 starts in 5 different countries, winning Grote Prijs der Giganten, Färjestads Jubileumslopp, Ådalspriset, Algot Scotts Minne and Grosser Preis der Stadt Gelsenkirchen. Fina Cup once again proved elusive as she finished fourth while Peace Corps won.

In 1992 she would start a further 23 times, finished 10-4-2 and winning races such as Gran Premio Freccia d’Europa in Italy, Grote Prijs der Giganten in the Netherlands and Fina Cup in Norway. Her ability to leave very quickly became her trademark and she won a lot of races by getting to the leading and controlling everything. Her gait was so natural and fast others had big problems matching her speed. The daughter of Mystic Park and out of Loving Look, a sister to Super Bowl, was a dream horse for trainer Göran E Johansson: «A fantastic horse. We started in the Elitlopp three times and made the final each time. In 1993 we finished third with everything left.»

She made a further 25 starts in 1993, finishing 8-7-1 and winning Gran Premio Palio dei Comuni, Gävle Stora Pris, Fina Cup and Gran Premio Ivone Grassetto. There was one win, however, that made Göran was very annoyed: «It was one of her easiest wins. But had I known that Kathy was so close to the world record I would have asked a little more of her.» She won the 1993 Fina Cup in 1:55.3f, equaling Nealy Lobell’s world record performance but those in attendance had no doubt that the only reason she didn’t lower it was because Johansson simply did not realize how fast was she was going.

Like some other Scandinavian horses at the time, Kathy spent some time in Italy toward the end of the year as there were more race and better money at that time of year down there. On Boxing day she finished sixth in the Gran Premio Gaetano Turilli in Turin, finishing well behind fellow Swedish trotters Meadow Prophet and First Sid who finished one-two.

After the race the three trotters were put on a bus and started driving towards Bologna. The interior of the bus had been temporarily rearranged to accommodate for 4 horses and a lot of equipment. Caretakers and trainers were keen to get back to Bologna to ready the horses for a return to Sweden the next day. Joining the Swedish trio was the Giuseppe Guzzinati-trained Columist, the son of Speedy Crown who had finished third in the 1990 Kentucky Futurity and was later exported to Italy.

After 5 hours on the road, just 30 kilometers north of Bologna, other motorists made the driver aware of a problem with the bus. Pulling over they saw black smoke come out of a roof hatch and what they were about to find out was that some hay in the middle of the bus had caught fire. That the horses had not been frightened and made a lot of noise was probably because, as the subsequent investigation showed, a lot of gases, including carbon monoxide, had formed and this probably dulled them.

When they opened the door to let the horses out, oxygen flowed in and fed the fire which took on an explosive character. Columnist stood closest to the door and was rescued first , followed by Meadow Prophet. First Sid and Kathy were further from the door but they managed to get First Sid out. Park Avenue Kathy, however, was stuck in her halter and could not be rescued out of the blazing inferno. In the end, however, the other three horses had to be put down because of the injuries they had sustained. They had hopes for Meadow Prophet’s survival but, according to part-owner Lars Gustafsson, «he fought for his life a whole week. But his heart couldn’t take any more in the end. He slumped to the ground all exhausted and I know it was over.» The son of Speedy Somolli, driven by John Campbell to a second-place finish in the International Trot earlier that year, thus became the fourth victim.

The investigation could not pinpoint what started the fire but managed to exclude most possibilities and in the end the most commonly believed theory is that a cigarette thrown from a passing car started the blaze. Dennis Funke of the Swedish trotting association who visited Italy and examined the burnt out bus saw only two possibilities: cigarette or sabotage. The Italian trainer Lorenzo Baldi believed it was an failed assassination attempt on him or some of his horses. But speculations are exactly that, speculations, and not facts.

What is a fact, however, is that a tragic career and life was over, one in which Park Avenue Kathy had started 121 times, going 40-24-20 in those starts and earning over 10 million SEK in the process (around $1 250 000 using today’s exchange rate). Unfortunately one of the best aged mares in the world at the time did not get a chance to pass on her genes to a future generation.

Photo is by Erik Widen