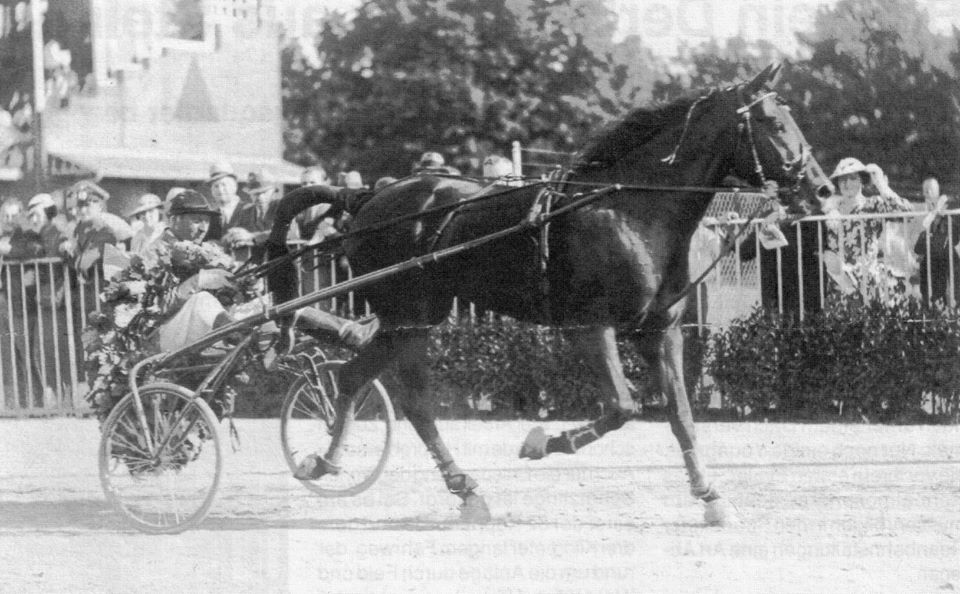 The disappearance of Walter Dear is well known (and the story is told in a separate article) but he was not the only one to be taken from Charlie Mills’ farm Gestüt Lindenhof at that time. Among the horses to suffer the same fate was Walter Dear’s first foal, the spectacular Probst, who was taken and never seen again.

As the first foal of the spectacular Walter Dear, the only horse to win both the Hambletonian and the Prix d’Amerique, there was massive interest in Probst from he was born. He certainly did his part in building up the expectations by winning a yearling exhibition at Ruhleben (Berlin) in October 1933. Then in December that year he was observed on the same track as he jogged behind his famous sire. An account from the day pointed out that behind Walter Dear, driven by Mills, was famed driver Johannes Frömming with Probst, and «one could already admire the correctness, lightness and fluid of his gait.»

This created high expectations and Probst did not fail. He won in his debut and when he started in the Jugend-Preis, then the biggest race for German two-year-olds, in August, Probst won by many lengths. His domination of German trotting was starting. The following year all focus was on the German Derby, the biggest race for three-year-olds, but in the morning of the race disaster struck. Probst suffered colic but since the trotter responded well to the treatment Mills and owner Arthur Brümmer took the risky decision to race him anyway – though with the agreement that at the first hint of problems Probst would be withdrawn immediately. Rather miraculously, however, the son of Walter Dear showed no signs of problems. Instead he won in a new race record time ahead of Oleander and Champus. After winning another race in August, Mills decided to withdraw his young protege for the rest of the year. Knowing it would be a big step up to the best aged trotters, Mills waited until July 1936 to start again. He made 15 starts in 1936, winning 11, but he was still a notch below the very best. In the Grossen Preis von Mariendorf («Grand Prix of Mariendorf») he lost to Xiphias while in the Großen Preis von Berlin («Grand Prize of Berlin») he surrendered to Indian despite the latter having a 140 meter handicap.

But Probst wouldn’t play second fiddle for long. In 1937 he rose to become the dominant trotter in Germany and quite possibly the best in Europe. In the Matadoren-Rennen on August 29 that year he easily won the first heat over Xiphias in 1:18 / 2:05.3. Tara, the last horse to defeat Greyhound, won the second heat and everything was set for a great showdown in the final. But there, Probst took the lead while Tara, disadvantaged with a 20 meter handicap, had to work her way up. Tara attacked but couldn’t quite get there, in the end losing to Probst who won comfortably by two lengths in 1:17.4/2:04.3, a new record for a European born horse. This record would stand for 15 years until beaten by another German, Permit, in the 1952 Elitlopp. Tara would, however, get her revenge in the Silbernen Pferd race in October that year when she won ahead of Probst and Xiphias.

Probst continued his dominance the following year, winning 10 of 13 races in 1938, before setting his sights on the French winter meeting in 1939. One of the favorites in the Prix d’Amerique, Probst narrowly lost to DeSota, the other favorite while French fan Jezd could only finish fourth. Charlie Mills later revealed he felt he should have won and probably would have done so has he not been as aggressive midway through the race. In Prix d’Amerique history, only two winners have sired another winner (Passeport and Ready Cash), but Probst was exceptionally close to add his sire’s name to that list as he almost duplicated Walter Dear’s win from 7 years earlier. In the Matadoren-Rennen later that year Probst also fell to another American trotter imported to Italy as McLin Hanover proved too strong, but against domestic competition he was still largely superior and he won 6 of 11 races in 1939. His most impressive performance came in the Grossen Alster-Preis, however, as he won the 2080 meter long race in 1:17.8, a European record which stood for 25 years until bettered by Elaine Rodney in 1964…

The 1940 season would be Probst’s last. Charlie Mills’ star again won the Matadoren-Rennens. He was also victorious in the Grossen Preis der Hansestadt Hamburg but was «only» third in the Hunyady race in Vienna – though he is surely excused somewhat when we take into account that he had to cope with a 160 meter handicap…

Retiring at the end of the season, Probst could look back at 56 wins in 77 starts. He went on to stand stud but only produced 41 foals although breeding of trotters surely wasn’t a high priority in Germany toward the end of the war.

Probst was a real superstar and his European records stood for a long time. Unfortunately, he was one of several German trotters whose greatness coincided with WWII and are now largely forgotten.