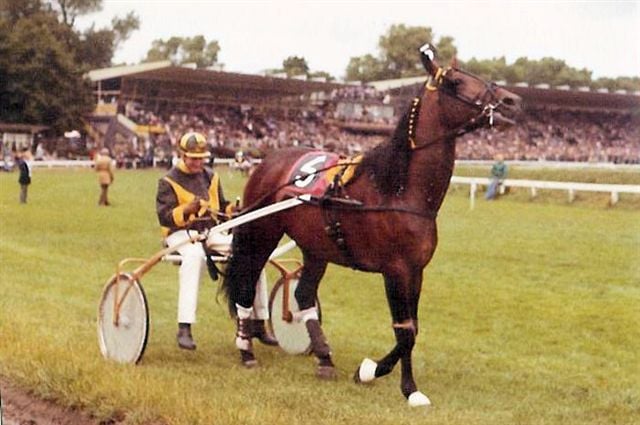 By Nevele Pride out of Pillow Talk, Stanley Cup was a 1973 half brother to Super Bowl. When breeder Norman Woolworth named the foal Stanley Cup he knew the colt would draw attention from ice hockey interested trotting owners – and he surely foresaw that Irving Liverman would find a horse with such a name irresistable. After all, Liverman was on the board of the Montreal Canadiens, the club that «owned» the Stanley Cup in the 70s. Sure enough, Liverman bought the yearling and entrusted him to Billy Haughton to train. Injuries prevented him from starting at 2, however (maybe somebody in here remembers him and can expand on that?). He showed some promise here and there at 3 but little consistency. Liverman eventually cut his losses in 77 and sold the 4-year-old to the Netherlands.

In the Netherlands he was trained and driven by Jan Hoejenbos for Gallant’s Farm. He won the Grote Prijs der Wintersprinters at Hilversum in 1978 but could not compete with the very best. He finished up his career with €56502 in earnings and a 1.14,1/1:59.1 record (set at the Meadowlands at 4).

He then stood stud at Gallant’s Farm in the Netherlands for two years (1979, 1980) before moving to Denmark for stud duty. He was nowhere near as successful as his big brother at stud (or some of his sisters such as Chit Chat (dam of Go Get Lost), Embraceable You (dam of Super Speedy) and Loving You (dam of Park Avenue Kathy). He didn’t produce much at stud. (I only see a few foals born in 1987 so he may have passed the previous year but I don’t know about that, hopefully somebody from Denmark can fill in those details.)

(Picture from the NDR archive)