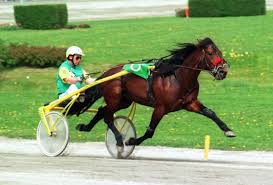 In 1989 Olav Christiansen, a farmer in the Norwegian village Åsenfjord, lost the right to let his sheep grace in the nearby mountains in the summer, so he decided to quit sheep farming and focus on harness racing. He traded his remaining sheep to Jon Arne Sand in exchange for Tomina Sandy, a yearling filly and the next year’s foal. That foal, Tamin Sandy, would make the deal one of the one-sided deals in harness history. While Tomina Sandy was a decent trotter with a 2:00.1f record, Tamin Sandy would rewrite all records. Full siblings, they were both by Speedy Tomali who was a fantastic stallion in Norway in the 90s.

Making his debut in January 1993 as a three-year-old, Tamin Sandy won comfortably at his home track Leangen (Trondheim). Starting his career with 8 straight wins, his only loss as a three-year-old came when he finished fourth in the Nor Trav finale at Jarlsberg on May 28th. Exceptionally fast out of the gate and quite recognizable because of his short neck, the Speedy Tomali-son would almost always rocket to the lead, control the pace and speed away in the final stretch. He won the Bergen 3-year Festival in a Norwegian record time of 1:14.4/1:59.4f, a record that would stand for 16 years.

Christiansen trained Tamin Sandy himself, working the horse relatively hard in intervals in the hills behind the farm. The results were historic. The Kriterium, the biggest race for Norwegian three-year-olds, was won with ease despite the crop containing Sugar Ray who had returned from the US. He had been taken to the US early and trotted 1:58 in Lexington as a two-year-old, yet had nothing on Tamin Sandy whey they went head-to-head. The win gave the colt his 19th win of the year and Christiansen then announced his decision to go to the European Championship for three-year-olds in Munich. Taking the lead and sprinting away, he notched his biggest win to date with a 5-length victory. Realizing they had a real gem on their hands, they went further south to start in the Orsi Mangelli in Milan, widely regarded as the biggest and most prestigious race for three-year-olds in Europe (until recent years). Tamin Sandy had met some tough opposition in the European Championship but it was much tougher in Italy. Pine Chip, Toss Out, Giant Chill and Turbo Thrust came over from the US, while Zoogin and King Lavec (who had competed most of the year in the US) took the trip from Sweden. Still, Tamin Sandy was the third favorite (behind overwhelming favorite Pine Chip and Toss Out).

Olav Christiansen got sick and had to travel back to Norway so he assigned the training duties to Italy-based Norwegian-born trainer Knut Endre Lie, and also gave a rather simple recommendation to driver Bjørn Garberg: «Kjør toillat», roughly translated «drive like silly.» Garberg did what he always did, he steered Tamin Sandy straight to the lead while Campbell and Pine Chip found themselves sitting close to the end of the 13 horse group. The rest of the drivers obviously had immense respect for the Norwegian horse with 20 wins already in 1993 and allowed Garberg to set the speed exactly to his liking: nice and slow. When Campbell and the rest realized their folly down the backstretch, Garberg upped the speed and made it hard for any of the others to make up any ground. Just turning and looking back in the last turn, Garberg expected the others to challenge but in the end, Tamin Sandy took yet another easy three-length win. Giant Chill and John Patterson was second while Pine Chip finished a disappointing fifth.

After his marvelous season the horse became a celebrity. He was even nominated for his province’s «Name of the Year» but lost out to Mona Juul, one of the key diplomats behind the Oslo agreement between the Israelis and the Palestinians. He was also invited on TV and brought into the TV studio. The production team was of course worried the horse would relieve himself in the studio but Christiansen assured them that there was nothing to worry about as the horse would only do that in safe and familiar surroundings. If it was Murphy’s Law I don’t know but Tamin Sandy responded by leaving relieving himself in the studio!

At 4 he followed up by winning 13 of 23 races and in the Momarken Grand Prix he was the only horse that could keep up with Copiad, the fresh Elitlopp winner. His 1:55.3f time was the fastest time of a European four-year-old and the time is still the four-year-old record at Momarken. At the time such a fast race by a Norwegian born four-year-old seemed almost unreal. He had a relatively decent season at 5 but got a rhinovirus infection which set him back and would affect – and shorten – his future career. In fact, he only lasted another year on the track.

He won 10 races in 39 starts at 5 and 6, and though he finished third behind Copiad and Ina Scot in the Olympiatravet at 5, it was obvious that the magic was gone. After 6 winless performances in 1996 against relatively easy opposition they decided to retire him to stud duties. He was a below average stallion but his fantastic season at 3 – highlighted by the defeat of Pine Chip – earned him a spot in the Scandinavian Trotting Hall of Fame. He died in 2014.