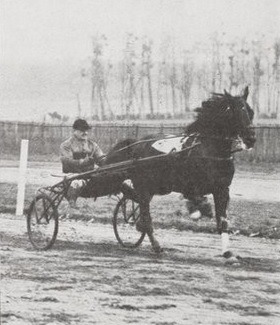 Bred by Charles A Nicholson of St Charleston and born 1922, The Great McKinney was bought by Frank G Warden of Des Moines (who also owned the Indian Mound Stock Farm in Enon, Ohio) and put in the training of Will Squier. Warden’s interest in the horse was natural: The Great McKinney’s sire, Arion McKinney, was also owned by Warden and stood stud at the Indian Mound farm.

When researching old horses one researches old harness magazines and old newspapers, the latter actually being the best source of information for results from both state fairs and Grand Circuit races. But some things can be overlooked, some things may not be reported (especially local races for very small money) and some things are also may be almost impossible to find. However, based on records The Great McKinney does not appear to have started at 2. Judging from how he is described later this would not come as a surprise, him being a horse that appears to have needed time.

The first mention is in his 3 year old season, in the Matron Stake in Toledo on Jul 16, 1925. Here he finished 6-8, presumably quite far off Sam Williams who won ahead of Aileen Guy and these two were a class above the rest. In the 2:12 trot for three year olds at Kalamazoo the following weekend he was an «also started» and he finished outside of the top 5 in either heat. On Sept 3, 1925, The Great McKinney picked up a win in the Governor’s Cup at Ohio State Fair at Columbus, winning the heats in 2:12 1/4 and 2:16 1/4. In the Cincinnati Enquirer on Jan 31, 1926, his three year old record was given as 2:09 3/4. It has not been possible to find any other 1925 starts than the ones mentioned so the when and where of this record is unknown (but there is no reason to question the correctness of the newspaper statement).

Just before the start of the 4 year old season in July 1926 he was sold by Warden to JB Fletcher of Newport, KY and moved from Squier to legendary trainer Sep Palin, perhaps best known as the trainer of Greyhound. The newspaper from that date describes the horse: «the youngster is a large colt for his age and has been developed by his former trainer into a trotter of real merit» and gives an indication of his type and ability. An article in Pittsburgh Daily Post on Dec 26, 1926 listed the price to be a «reported $6500.» Competing in the 2:06 trot at North Randall (Cleveland) on July 6th, the three heats were won by Christie Mac, The Great McKinney and Pearl Benboe, the latter being the favorite but making wild breaks in all other heats. Christie Mac then won the final rather easily. The Great McKinney’s win was in 2:07.1. (Pearl Benboe is, by the way, the trotting fourth dam of Zoot Suit whose pacing dam had, despite what many believe, a trotting maternal side.)

Back in Toledo on July 16, The Great McKinney posted 2-2-1 but lost to the 1-1-2 Mike Dillon driven by Tom Murphy, Palin’s horse winning his heat in 2:06.3, the Cincinnati Enquirer describing his win as: «in the final, the Great McKinney (…) beat the start and won all the way, Mike Dillon only getting to his wheel at the finish.» With the Grand Circuit moving to Kalamazoo the following week, he started in the 2:13 trot where won all three heats. According to the Logansport Morning Press, «the Palin horse led by three lengths and was the class of the race all the time.» This simple newspaper article does not do The Great McKinney justice. An article in Horse Review on July 28, 1926 elaborated on the impressive performance: «After witnessing the race that The Great McKinney put up in the $3,000 stake for 2:13 trotters, numerous horsemen expressed the opinion that had he started in the Exchange Club he would have proved a strong factor. (…) «Sep’s» friends put down their cheques as if the event was a sinecure for the four-year-old and that is just what it proved to be. Donald A., 2:03 3/4 who showed so sensationally at North Randall, has about as much speed as other than champion trotters possess, but The Great McKinney was not only able to match him but quickly shake him off. Palin’s mount sold for $50, Donald A. bringing $30, and the field about $20, Hollyrood Jessie 2:04 being the chief field hope. They were away with Jessie in front, Donald trailing and McKinney third at the half in 1:02 1/2. When Palin got ready to go forward he just gave his colt his head and came home three open lengths to the good in 2:04 1/4, meantime looking around as if he were sightseeing. Donald faltered and Jessie won the place from her four-year-old relative, Poppy, also a daughter of Belwin 2:06 3/4. Just to sample his steed as a pacemaker, «Sep» took the front route in the second heat and pulled up far in advance of Donald and Poppy, the filly again showing to advantage for Ben White. So far was The Great McKinney in front in the final that it seemed as if he was merely working out and taking advantage of the fact that the field was tiring Milloy sprinted Mary Watts into second place. Winnie O’Wynn showed speed in places but is not as yet up to a hard race. Hot Toddy, for the first time in her career, was distanced after breaking.»

Elsewhere in the same magazine is found a description of the horse himself: «The Great McKinney, while not oversize as to height, is one of the most powerfully built trotters now racing and I think the most highly developed in a muscular way. He reminds me in this respect of Cresceus, who had the build of a heavyweight pugilist. Mc-Kinney’s gait is not of the precise, rhythmical character of that of some of our present day fast trotters, but he has a way of covering ground that is deceiving, making it difficult to realize that he is stepping so fast. His developer, Will Squier, had him pegged for a 2:02 or better trotter and his present driver, «Sep» Palin, simply smiles when one asks how fast he expects to ride behind the four-year-old. Sep, I think, is just awaiting the time when he has McKinney matched against real class and then anticipates gathering much provender for the family larder.»

Just as the big fella started to blossom, he got sick and was laid over until 1927. The picture painted by the available information suggests that The Great McKinney clearly needed time to develop but when he finally came into his own, he appeared to have been a very impressive trotter of both great speed and strength.

In 1927, at Indianapolis in June, he easily won both heats the Free-for-all trot in 2:10 and 2:09 3/4. There is very little available information about starts, in fact no more starts in 1927 can be found. The likely reason is because he was injured. In 1928, at Toledo at the end of June, The Great McKinney started but was distanced in a free-for-all won by Betty Ann Maxey. He fared no better at North Randall a week later when High Noon won. No other starts in 1928 can be found. He shows up in lists dated April 23, 1929 of horses nominated for upcoming fair events but did not start in any. One likely reason is that he was probably struggling with injuries or sickness.

The Great McKinney was imported to France in 1929, and in the Aug 29, 1929 edition of the Trotter and Pacer magazine we can read that «Al C. Pennock has bought The Great McKinney and rumor has it that the trotter soon will be on the way to Europe.» The rumor makes sense if we assume the Pennock was acting as an agent (for Valentino Capovilla). It is important to keep in mind that Pennock had been in Europe with trotters before and had also worked for a few years as a trainer in Italy. The Great McKinney never raced in France and only acted as a stallion, beginning his stud career in 1930 until 1941 when he was exported into Germany (I am unsure if his export to Germany was voluntary or not.). His legacy in trotting history is ensured as sire of the great stallions, and full brothers, Kairos and Ogaden. The brothers were out of the first French superstar mare, the three-time Prix d’Amerique winner Uranie (trained by Valentino Capovilla).

Ogaden was a very good trotter who won the 1943 Prix de Paris and was 4th in the 1944 Prix d’Amerique and went on to become a good stallion. Kairos was a good trotter but did not win any of the top races but was the leading French sire for many years, producing two Prix d’Amerique winners (International Trot winner Hairos and the magnificent Gelinotte) and was the damsire of many top trotters including Roquepine.

Although the available historical information on The Great McKinney may not be complete, what we do know paints the picture of a very good trotter and through Ogaden and Kairos he is found in many pedigrees in France. The best known representatives of his sireline today are Orlando Vici and his son Un Mec d’Heripre.

Picture 1: The Great McKinney. Sorry for the poor quality

Picture 2: His son Kairos (Capovila up) at 3