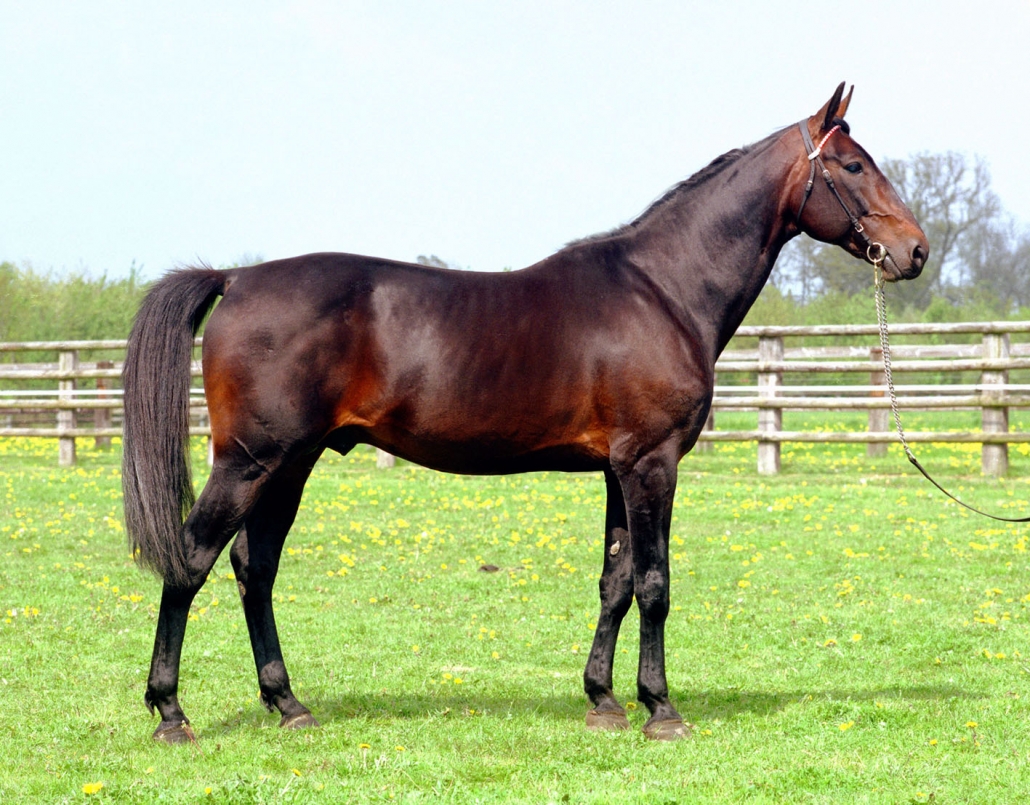 In the previous article I outlined how Mickey Viking came to stand stud in France and how his first crop, born 1987, contained 30 foals but that this crop had numbers way above average. As I also mentioned, when his foals were born, Mickey Viking was already dead from a brain tumor. In the context of the French trotter it is worth devoting a paragraph to what Mickey Viking’s death lead to. Just a few years prior the idea of standing a stallion with a wholly American pedigree was out of the question, but the introduction of Mickey Viking seems to have matured the issue in the heads of those in charge at both the French national stud and the French trotting association itself. The success of Florestan had started a major change in the French trotter and more and more French breeders were positive to foreign influences. Plus as some said, how much can it hurt to have just a few foreign stallions out of 3-400 stallions in total? As it turned out, a few was all that was needed to completely revolutionize French trotting – and also, in my mind, European trotting with it. (Some French breeders were adamant that they would never use a foreign sire, or even sons of those. Most notable in the opposition was the Viel family who compared the introduction of US trotting blood as «planting weeds in a beautiful flower garden.» With hindsight that attitude has clearly contributed to the diminishing levels of success of the Viel family in the new millennium.)

In 1988 a French delegation traveled to the US in search of the a replacement, and after looking at a lot of options, put 2 million dollars on the table for Workaholic. Workaholic had stood 3 season in the US (86, 87 and 88, Lauxmont Farms and Walnridge Farm) and enjoyed mixed success but struggled with limited mares. In France he had no such problems. French stallions are limited to 100 mares and when Workaholic made his stallion debut at the Haras du Pin in 1989, there were close to 3000 applications for 100 spots! Workaholic was ideally suited to French mares. He was inbred (3×3 to Speedster) and could use the outcross provided by French mares, had no Star’s Pride in his pedigree so he crossed with the other foreign bloodlines there (through Florestan, his brother Granit (by Ayres) and Kimberland (a son of Nevele Pride out of a French daughter to inaugural International Trot winner Jamin)). Moreover, Workaholic’s small size (by French standards – he was 161cm, just below 16 hands), natural gait and early speed complemented French broodmares perfectly. If anything, Workaholic had the same issue as Florestan: many of his get were simply too talented. French breeders and trainers were used to having big, bulky trotters, often poorly gaited and limited natural talent, almost always with strength in abundance but also lacking natural speed. And from these new sires with US bloodlines came trotters who were the miurror opposite; trotters who were perfectly gaited, natural trotters, often with great speed and acceleration (especially compared to their wholly French counterparts). Many trainers ruined these horses because they didn’t know how to train such talented trotters. Several of these horses ended up being trained too fast, too hard and were rushed too much at an early age. Despite this, Workaholic produced several top trotters in France and Workaholic thus followed up on Florestan’s «work.» The French studbook was opened up in a very limited way between 1987 and 1992 and this gave French trotting stars like And Arifant (a son of Sharif di Iesolo, an Italian-born son of the US import Quick Song), Buvetier d’Aunou (a son of Royal Prestige), Coktail Jet (sire of Love You), Cezio Josselyn and Defi d’Aunou (sons of Armbro Goal) and Elvis du Rossignol (out of US-born Arndon-daughter Velvet Slipper, second sire of Aubrion du Gers). The final piece of the puzzle of the French trotting revolution, the horse that in many ways brought it all together seemed an unlikely hero at first; Viking’s Way, a son of Mickey Viking.

French breeder Albert Cayron used to bet on races but in the early 80s he jumped the fence and entered the breeding business. Luck or skill, he had a knack for picking up unremarkable racehorses who turned out to be great broodmares. His first broodmare, Kalinka, produced Sebrazac, winner of four French Group 1 races in 1988 and 1989 (Criterium des 5 ans, Criterium Continental and Prix de l’Etoile x2). He also bought Actrice du Pommeau and sold her back to the «du Pommeau» breeder Jean Pichon when she was in foal to Sebrazac. The resulting foal, General du Pommeau, was one of the best trotters in history and one of the few who beat Varenne fair and square (in the 2000 Prix d’Amerique). Another mare that produced greatness for Cayron was Josubie. How the other mares became great broodmares is not readily apparaent but the acquisition of Josubie makes sense in every aspect. She was decent on the track, though not close to the best in her crop, but also has a beautiful pedigree. She was a a half-sister to Passionnant – one of the best French trotters in the mid-80s and also a very good sire – while her dam Vesubie III was a full sister to International Trot winner Pluvier III. Josubie produced some decent horses yet nobody that delivered on the potential her pedigree promised. Cayron had a small share in Mickey Viking and bred Josubie to him in 1986, producing a nice colt Cayron named Viking’s Way.

Viking’s Way showed a lot of talent at 3 and won 7 of his first 10 starts. Unfortunately that was as good as it got. He was seventh in the Criterium des 3 ans that December and third in the

Both owner Albert Cayron and trainer Michel Roussel considered him exceptionally talented. Cayron always maintained Viking’s Way was the most talented trotter he ever bred, better than Sebrazac, even though he failed to fulfill his potential on the track. In fact, Viking’s Way’s racing career, despite promising, is so unspectacular that he is today solely remembered for his stallion performance. Given his talent, Cayron wanted him to stand stud. To stand stud in the French studbook you must meet specific criteria but Viking’s Way didn’t meet the required performance standard and Cayron had to apply to a committee at the National Stud. Back in those days the committee consisted of eight members and of these eight, initially only two said yes to granting Viking’s Way a stallion licence: the head of the national stud plus one other member (Philippe Henry). Cayron appealed to the national stud to let Viking’s Way get a chance. The national stud had, he argued, believed in and bought the father, surely they ought to believe in one of his talented sons at stud, too? The argument was accepted and Viking’s Way got permission to stand stud – but could only breed a maximum of 20 mares per year! Cayron felt that 20 mares wouldn’t give Viking’s Way the necessary possibilities and through friends in high places he got this increased to 60 mares per year.

Cayron’s belief made sense, especially in the context of French trotting around 1990. Viking’s Way had shown early speed and natural talent and he was also built a bit different than many French stallions, he was certainly more American in type than other French stallions. Florestan had also shown how well US bloodlines could improve French mares. But in his first year at stud (1991), there was initially little interest. Cayron approached several people to try to drum up interest, among them Moise and Jean-Claude Monthean, the family breeding the «Bellouet» horses. Monthean sent Paola de Bieville and the resulting filly, Eyra de Bellouet, was an outstanding performer who was top-3 in 10 group 1 and 2 races from 95 to 97. Espeyrac Sun was also a good trotter in the 92 crop but Viking’s Way but this crop was only a warning of what was to come. Monthean decided to use Viking’s Way and in 1996 he sent another broodmare, Vaunoise. The resulting foal, Jag de Bellouet, was a world-class trotter, a freak of nature with both speed and strength in abundance, excelling at literally everything. Jag de Bellouet, named for Jean-Claude Monthean and his wife Agnes (letters J + AG), won 12 group 1 races and earned more than 4.2 million euros. But before Jag came along, Viking’s Way’s daughter Holly du Locton (born 1995) absolutely cleaned up in the monte (RUS) races from 1998 to 2000, winning 16 (and top-3 in another 9 – for a total of 26) group 1 and 2 races.

Viking’s Way sired a long list of top trotters. Fortunately not too many suffered from his sire’s bad feet. Many showed early speed and talent and almost all had the admirable and desirable quality of improving with age. Viking’s Way is also one of the better «sire of sires» the world has ever seen. Jag de Bellouet is a good sire. Of other sons, Viking’s Way’s son Imoko has sired Timoko; Indy de Vive was a good sire, who unfortunately died too early at 12, and who sired Ready Cash; Islero de Bellouet was a decent racehorse and even better stallion who sired the tough and durable Uhlan du Val while Niky has been a good stallion and is the sire of Bilibili, the current monte king of France. Toss in that Viking’s Way is closely related to Ginger Somolli, sire of Rapide Lebel, and it is easy to see how influential these bloodlines are (Ginger Somolli is by Passionnant out of a daughter to Mickey Viking while Viking’s Way is a son of Mickey Viking out of a sister to Passionnant). To see how it all comes together one only needs to look at Ready Cash’s pedigree. His sire Indy de Vive is a son of Viking’s Way. Florestan appears twice in the fourth generation, once each on the paternal and maternal sides and his second dam is by Workaholic. Bold Eagle is out of a Love You daughter and his second dam is by Workaholic while his third dam is by Passionnant, a son of Florestan.

Viking’s Way was champion stallion in France in 1999, 2005 and 2006 and second each year from 2000 to 2004. Cayron built his stud farm around Viking’s Way but at Christmas Day 2003 disaster struck as Viking’s Way passed away from colic – but not before the stallion had played a major part in the French trotting revolution.