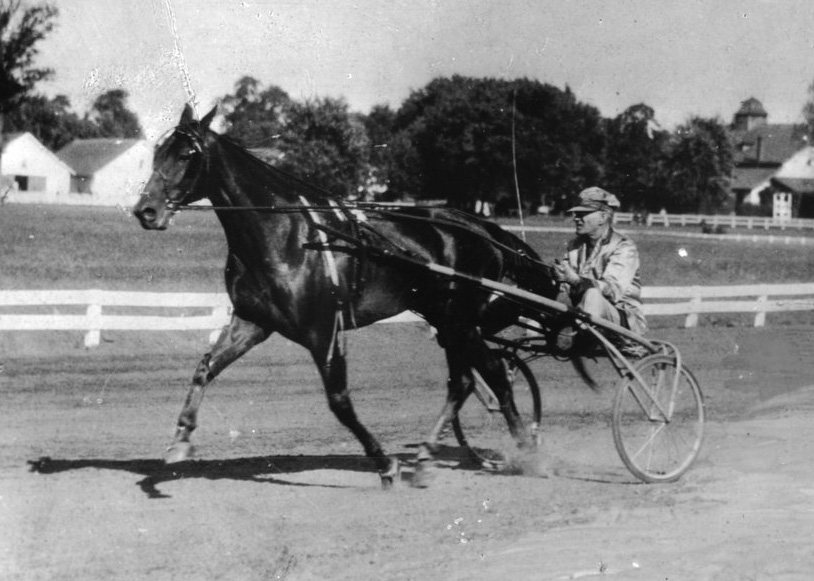 Think of Volomite and you surely think greatness. However, remember that Volomite was «only» the second best in his crop on the track. There is reason to suspect he was only second best at stud, too, but while Volomite’s future and safety was taken well care of in the US, quite the opposite was the case with his superior, the German-imported Walter Dear. This is the story of the only Hambletonian winner in history whose fate is unknown.

Bred and owned (until he was exported) by William Cane of Goshen (of Good Time Stables), Walter Dear established his dominance in the crop early on and came into the Hambletonian fresh off winning the Kentucky Futurity in straight heats the previous week (because of rainouts the Hambletonian had been postponed until October 8 that year). A winner of his six previous contests, the Hambletonian was in the eyes of most people a foregone conclusion and even though some believed Volomite could possibly stage an upset it turned out exactly as most people had predicted, with two easy heat wins for Walter Dear. This win made Walter Dear historic in being the first from Peter the Great’s sireline to win the Hambletonian.

Shortly after the Hambletonian win Cane was offered $25 000 for Walter Dear by Bruno Cassirer and Arthur Brümmer. Cassirer, an art dealer and owner of a publishing house, had personally saved the Mariendorf racetrack in Berlin from going bankrupt in 1913 by assuming personal responsibility for all debts while using great leadership skills by modernizing the organization and also getting rid of internal unrest in the Berlin and German trotting community. Cassirer also owned the stud farm Gestüt Lindenhof just north of Templin (around 80 kms (50 miles) north of Berlin), not too far from the Polish border (Templin is probably most famous for being the place where the current Chancellor of Germany, Angela Merkel, grew up). Previously owning a farm in Damsbrück, Cassirer bought Lindenhof in 1931. An impressive facility, a 5/8 training track was constructed and champion trainer Charlie Mills established his operation here. In 1933 Cassirer sold the facilities, at least in name, to Charlie Mills. He had no choice. After all, Cassirer was Jewish and with Hitler’s rise to power in that year it became increasingly difficult to own property and run a business. He would continue to try for a few more years, but in 1936 his publishing house lost the right to publish and in 1938 Cassirer fled with his family to England. He passed away in Oxford in 1941. (The Gestüt Lindenhof still exists and the really nerdy can even rent a room there for a holiday as a small part of it is now a guest house – it is on my bucket list at least…)

Cassirer had also tried to purchase another US star, Hazleton, but he ended up with Otto Dieffenbacher in Milan, Italy. These two won many of the bigger races in Europe but did not meet too often. But when they did Walter Dear almost always emerged victorious. However, being very close in speed and abilities, the races were usually won by the narrowest of margins. Walter Dear’s ability to leave faster than Hazleton usually gave him an advantage of position. In heat after heat Hazleton lost by inches to Walter Dear the winner by inches only, the Hazleton having to trot outside him all the way and on several occasions the Hazleton people claimed that luck and the rail position were the reasons Walter Dear managed to win.

One of their most memorable battles took place in the 1931 Copenhagen Cup (technically this was an Invitational race that is the precursor to the current Copenhagen Cup but lets not get too technical), Hazleton came into the race with 13 straight wins while Walter Dear had lost once in his last 12 starts. As written about in the Hazleton article, that horse’s Italian owner Daniele Palazzoli put so much money on Hazleton to win that he paid almost nothing back, thus increasing the odds on Walter Dear. Although Palazzoli did not reveal the specifics, he is believed to have lost almost 15000 DKK. In today’s money that is roughly 600 000 DKK, almost 100 000 USD. A whopping 17000 people came to see the two superstars battle it out for a prize of 25 000 DKK (around 900 000 DKK or 150 000 USD in today’s money). In fact, the attendance money alone covered the purse and another 25 %! The clash of Hazleton and Walter Dear was such a big happening that the Danish king Christian X attended – his first and supposedly his only visit ever to the Copenhagen racetrack. Walter Dear won in the first heat in 1:18.4 / 2:06.1 and 2:08¼, the first heat time being the fastest by any trotter in the Scandinavian countries. In both heats Walter Dear had managed to get to the lead and although accepting the defeat, the Hazleton party contended that if the positions had been switched, the outcome would be different. To illustrate the kind of battle that had been going on, Walter Dear’s winning time of 1:18.4 stood for 20 years until Rollo (a younger brother to Muscletone) finally lowered it in 1951 (admittedly, the Copenhagen Cup was not ran every year but who cares?)

But Walter Dear impressed all over Europe (except Italy where he did not venture). He won the 1934 Prix d’Amerique. He won the Matadoren-Rennen, the biggest race in Germany, three consecutive years. Another big German race, the Preis von Deutschland, was won twice. In the 1933 edition, Walter Dear was given a 140 meter (155 yard) handicap but still managed to win! His race record from the 1933 race stood for 24 years until another Charlie Mills horse, the legendary Gelinotte, finally broke it in 1957. He lost the 1932 edition to another US import, Legality, who he usually beat but on that occasion failed to do so.

While Hazleton continued to race until a very advanced age, Walter Dear was retired to stud at 9 and he had bred a few mares before then. One of his first foals, Probst, won everything in his crop and became one of the first German born international stars. It did not take long for Walter Dear to prove his worth at stud. A quick look at the winners of the German derby tells the story. In his first 8 crops he produced 5 derby winners (1935, 1939, 1940, 1941 and 1942). He was champion stallion each year from 1939 to 1943. Clearly he was one of the best, if not the best, stallions in Europe. One can only imagine what he would have produced had he been give the same kind of mares that Volomite received year in and year out at Walnut Hall farms. There is every reason to believe that Walter Dear would have given Volomite a very good run for his money.

In addition to Lindenhof, Charlie Mills also owned the Staffelde farm just outside of Berlin and it was from here that Walter Dear and around 20 other horses were taken toward the end of the war. Among the other horses taken were the star Probst and Missouri, both Derby winning sons of Walter Dear. Another horse who disappeared was the aging broodmare Ethelinda, dam of Hambletonian winner McLin Hanover who had been imported to Germany in the late 30s. (Ethelinda had with Walter Dear produced the good trotter Ethawa who survived the war.)

As luck would have it, Missouri was actually recovered and because a useful stallion after the war but he was the only one that was found and can be accounted for. Several attempts were made to figure out the fate of the other horses but nothing could ever be ascertained.

Charlie Mills later explained that Soviet soldiers came to the farm and left with Walter Dear and several other horses. We know that Walter Dear and the others disappeared when the Red Army steamrolled towards Berlin. The four prevailing theories are that he was either (1) slaughtered and eaten by starving Russian soldiers, (2) taken to Soviet trotting farm to do stud duty, (3) used by Russian army for transport, or (4) died as a casualty of combat – although he latter is extremely unlikely the way I see it. Even though he was almost 20 years old he surely could contribute to an army in need to horses. (Some have theorized that he may have been sold on the black market but personally I dismiss this completely: I simply do not believe there is a functioning black market for trotters around the front at time of war.)

At that time and given the circumstances it seems unlikely that the soldiers even knew who they had in their possession, nor that they focused too much on about his breeding value. But everybody will, in the end, just be speculation. The only thing that we know for sure is that we will never know his fate.