Even though Hambletonian is universally regarded as the founding sire of the standardbred there have been others that looked to be great sires but now are largely forgotten. The most important of these is probably the Indiana bred Blue Bull (also known as Wilson’s Blue Bull to distinguish him from other horses named Blue Bull). Blue Bull was a pacer but his get were primarily trotters. Born 6 years after Hambletonian, they were contemporaries but while Hambletonian almost always had a big reputation and access to some of the best broodmares, Blue Bull lived in relative obscurity. 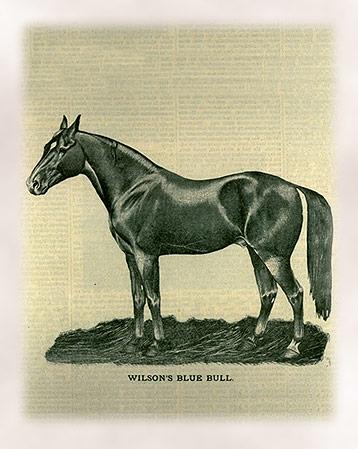 But while Hambletonian sired 40 trotters who ran in 2:30 or less, Blue Bull sired 56. And while Hambletonian sired 2 trotters under 2:20, Blue Bull sired 5. It is particularly interesting to note that Hambletonian’s best get almost all come from good or great broodmares from top maternal families, while Blue Bull’s best get come – like almost all of his get – from dams whose pedigree is generally unknown. These were often farm or road mares that were not specialized trotters, yet Blue Bull managed to produce trotters anyway. Every indication is that Blue Bull didn’t produce great trotters because of their dams but rather despite their dams.

But for all of Blue Bull’s superiority at the time, he failed to produce any sons who went on to became good stallions. None of his sons reproduced their speed at stud, nor did his daughters produced those kinds of trotters but for a few exceptions. Hambletonian’s sons, on the other hand, went on to dominate and improve the breed (like Electioneer, George Wilkes, Alexander’s Abdallah, Dictator, Volunteer, Harold and Happy Medium – to mention a few), and his sireline died out almost immediately. After just a few generations, Blue Bull was really a thing of the past and having him in the pedigree was not even seen as a positive thing.

The common belief and misconception is that Blue Bull – like Hambletonian – never raced. Although very little is known, a tiny bit of information was provided by the owner, James Wilson, in a stallion ad published in the «Spirit Of Times» in 1874 where he writes that «BLUE BULL paced a fourth heat in Cincinnati, Ohio, as a four year old in 2:24, and as a five-year old showed 2:14, when he met with an accident, and has since been used for the stud. As a result we know that he had a limited racing career and that he also showed quite a bit of speed himself.

His obscure origins have made his pedigree a matter of some discussion and uncertainty. Wallace officially recorded Blue Bull (Wilson’s Blue Bull) is by Pruden’s Blue Bull, himself a son of Mering’s Blue Bull. Some would question his paternal pedigree but there was consensus on the maternal pedigree, that his dam was a mare owned by Elijah Stone called Queen and that she was by thoroughbred Young Selim out of a Copperbottom mare. John Hervey strongly disagreed with the given paternal pedigree and based much on this on color genetics (the actual genetics weren’t known or understood at the time so technically it would be more accurate to say «color observations»). Merring’s Blue Bull was a heavier type horse and said to have a dun coat color, by some sources blue or dark blue (presumably a horse with the grullo color gene). Pruden’s Blue Bull was described as a very light sorrel with a bald face and four white feet up to his knees and hocks (sorrel is the same as chestnut). Blue Bull (Wilson’s) was described as «bright sorrel, star, one hind ankle white.» One objection was that none of Wilson’s Blue Bull’s foals had the roan or dun colors of his supposed grandsire. However, from the standpoint of color genetics, the dun gene is dominant. Therefore it is entirely possible that Merring’s Blue Bull had one chestnut/sorrel gene and one dun gene, the latter giving him a dun appearance. But if Merring’s Blue Bull passed on his recessive chestnut gene to Pruden’s Blue Bull (who in turned passed it on to Wilson’s Blue Bull that would also explain why the dun color does not show up in the latter’s get. Although Hervey’s observations seem factually correct, they are in no way proof that the official pedigree is wrong. Horse people from Indiana at the time agree with the official pedigree and every indication is that it should be assumed to be correct. (Some, though, and especially in Morgan circles, believe Blue Bull’s sire to be the Morgan horse Comet (also known as Goff’s Comet), a son of Chittenden County Morgan, in turn a son of Putnam Morgan, himself a grandson of Justin Morgan – and his dam Queen to also be by Putman Morgan. Blue Bull has Morgan registration number 1200, by the way. But this information is merely included here as a matter of information and is not meant as speculation.)

In the Breeder and Sportsman, vol 22 from 1893 there was a published letter to the editor which gave much information about his paternal heritage, written by Abner Francis of Paddy’s Run, Butler county, Ohio:

«The horse known as Mering’s Blue Bull was brought by Mr. Snively from Chester country, PA, to Hamilton, Ohio, about the year 1820 when he was a two-year old, and while there was kept mainly as a stock horse. About the year 1825 Mr. Snively sold him to John Mering of Morgan, Butler County, Ohio. Mr. Mering made, perhaps, four or five seasons with him in his own neighborhood, and then sold him to a party in Dearborn county, Indiana. Your correspondent has no knowledge of him from this time until about 1838, when an Englishman named Grisley, who lived in Crosby township, Hamilton County, Ohio, was in Cincinnati on business, and while there met a man with whom he was acquainted, and who was the owner of Blue Bull. He purchased the horse from his friend, took him to his farm and kept him as a breeder until about the year 1842, when he died. While Mr. Grisley had him he was very popular and did a large business at a small fee.

Blue Bull’s sire came from England, and his color was a golden dun. His dam was a large black Canistoga mare used in a team in hauling goods West over the Allegheny mountains – a breed of horses well calculated and extensively used for teaming in those days. Blue Bull’s color was a blue or mouse color, and had some white on his legs, with a broad, white blaze in his face and a black streak along his back. He was of medium size, very compact in form, and of great substance; his neck was short and thick; his ears were short and near; he was well-ribbed, closely coupled, hips rather wide and rump somewhat steep. He was a pacer, and while no claim was made for him as to speed, he was quite active. His colts were generally blue or dun, with the distinctive black streak along the back, and for the wagon, plow or general business, were well adapted for his time.

Blue Bull was known and advertised by the name of Ohio Farmer, until he was nicknamed Blue Bull while Mr. Mering owned him, about which the owner was very indignant.»

At the time it seemed like a fairytale story, a famed sire of trotters rising from obscurity. But despite him producing better than Hambletonian at the time, the latter went on to rule the world while Blue Bull became a passing phenomenon that is now completely forgotten.