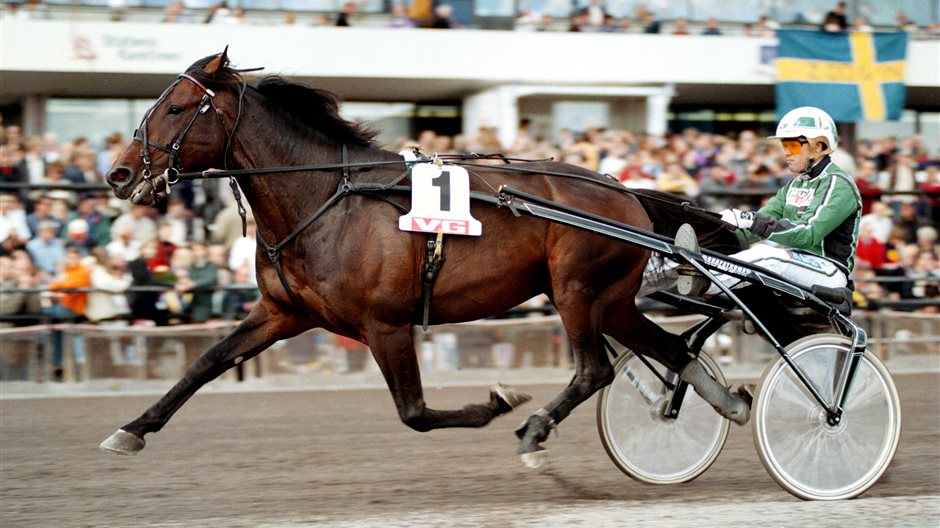 Bred by Lennart & Lars-Göran Olsson, Zoogin was sold as a two-year old to Håkan Andersson in August 1992 and entrusted to Åke Svanstedt. He started twice at two but ended outside the money on both occasions. After the winter break he won his first start at three and quickly established himself as one of the more promising Swedish three-year-olds. He won an elimination of the Färjestads Nordiska 3-åringspris but after making a break only finished fifth in the final. Finishing second in his elim of the Kriterium left him with a tricky post 8 in the final but Zoogin won the final after a strong finish where he managed to hold off King Lavec.

As a four-year-old Zoogin increased his dominance in the age crop. He was disqualified in his season debut but after that he went 9-4-1 in the remaining 14 starts. Victory eluded him in the two biggest races, however, as he finished second to Zenit F in the Derby and third behind Zenit F and Progress Value in the (Swedish) Breeders Crown. Svanstedt, at that time based in Matfors outside of Sundsvall, had perfected his unique training regime, training the horses in uphill tracks and training them hard. Svanstedt himself claimed Zoot Suit was his favorite stallion as his get «were perfectly suited to my way of training. They can take the training and has strong psyche. They also have the willingness and an ability to absorb training in the right way. A half decent Zoot Suit can be trained to be good. My belief is that Zoot Suit’s are tougher and can take more training than other horses. Possibly it’s the Nevele Pride blood that is coming through.»

With this foundation, Zoogin already had the necessary strength and at five he immediately established himself as one of the top aged trotters in Europe, winning the Åby Stora Pris, Jubileumspokalen and Jämtlands Stora Pris (where he wore down Copiad) while finishing second to Copiad in the Elitlopp. Oddly enough, he repeated those positions next year, the only difference was Coktail Jet being the Elitlopp winner. He also ventured abroad for the first time, finishing fifth in the Prix de Belgique in January 96 and then going to Germany, winning the Elite-Rennen in Gelsenkirchen in July. In the Prix de Belqique, however, Zoogin picked up a slight injury that kept him out of the Prix d’Amerique and sidelined until early May.

1997 started really well with wins in the Finlandia Ajo and Oslo Grand Prix. A heavy favorite in the Elitlopp, he made a break in his elim and failed to make the final. He then won the Copenhagen Cup, Jämtlands Stora Pris and Gävle Stora Pris before he started to show he was beatable, winning only 1 out of his 7 remaining races that year, but still earning 4.3 million SEK that year. At 8, in 1998, he earned almost as much money after winning 6 races including the Jubileumspokal, Sundvall Open Trot, the Swedish Championship and the Nordic Championship. Even though he «only» won 6 of 15 he was still voted Older Swedish Horse of the Year for the fourth consecutive year. The following year, however, he was really showing his age. He only started nine times and won only three smaller races. He only finished fourth in his Elitlopp elim and sixth in the final. After finishing fourth at Romme in July the curtain was pulled on his career, a career that had produced a 51-19-8 record in 96 starts and earnings of more than 25 million SEK, making him the fifth-winningest Swedish born horse of all times (as of early 2017). Twice awarded the Swedish Horse of the Year honors and a four-time Older Swedish Horse of the Year, Zoogin had a lot of followers and was an extremely popular horse.

When Zoogin entered stud, the horse affectionally just called the Meatball («köttbullen») because of his wildly untraditional pedigree, compact body and powerful style, was seen by many as the ideal outcross as his pedigree is void of Speedy Crown, Super Bowl, Noble Victory and Florican. But Zoogin failed to reproduce is abilities at stud and very quickly lost the interest of Sweedish breeders. Eventually he was exported to Russia in 2013 where he stood stud at the Rudnev farm.