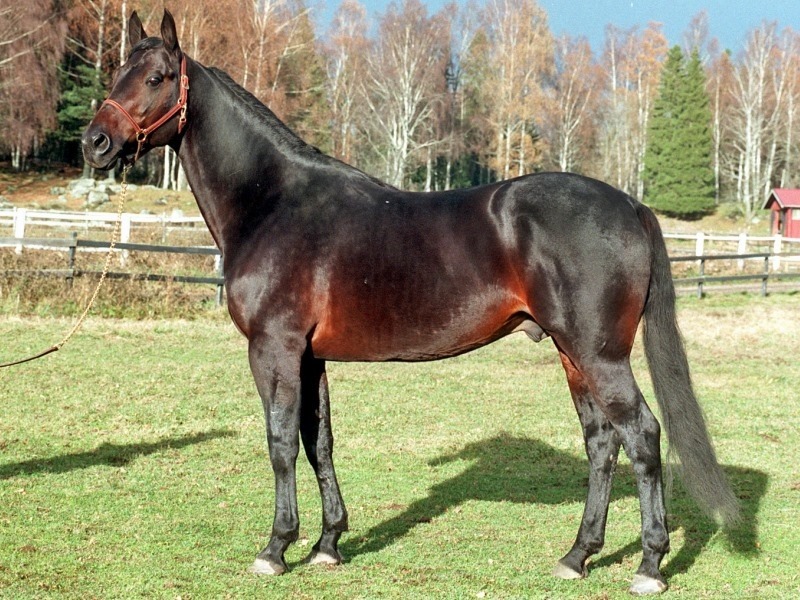 Bred by Joe Johnston, the track veterinarian at Windsor Raceway and recipient of the 2002 Windsor Raceway’s Good Guy Award, A Worthy Lad was broken by Mark Austin before he was put in the training of Bud Fritz. He was initially quite wily and gave Austin some challenges, but when turned over to Fritz he was the consummate professional, never taking a wrong step.

As a two-year-old he made 17 starts in 1989 – resulting in 17 wins. He competed primarily in Ontario Sire Stakes races. Back then there were no Grassroots or Gold series, so A Worthy Lad had to race against the best in the province immediately. Fritz would usually play out the horse’s speed in the middle section, get to the lead and control the race from there, usually winning very comfortably.

It wasn’t all easy sailing, though. From his Canadian Horse Racing Hall of Fame page: «The most vivid memory is the race where, by all rights, the streak should’ve ended. The undefeated career and undefeated season almost slipped away in the last start of A Worthy Lad’s two-year-old campaign, a $100,000 Ontario Sires Stakes event in London, ON. Johnston remembers early chaos, including the one-horse falling down in the post parade and then, not surprisingly, making a break just after the start. Starting from the trailing position, A Worthy Lad navigated around that horse, only to have the second-position horse run in front of him as well. Again, Fritz moved him over and clear of trouble. Almost comically, and immediately thereafter, two more horses he was following made breaks, causing him to again move farther to the right. All told, A Worthy Lad had trotted the first eighth-of-the-mile straight sideways.

«He spotted them an eighth-of-a-mile, if not more,» said Johnston, incredulously. «He should have been out of the race entirely, but by the three-eighths pole he was back in front. I have no idea how far he actually would have trotted between those two poles. That race was unbelievable beyond all of the other races that he won. It was almost like he wasn’t supposed to get beat. He was unbeatable that night.»

Some horses who go undefeated through their freshman season struggle to follow up in their sophomore year, but not A Worthy Lad. As a three-year-old he made another 13 starts in Canada, winning all of them. His racing career was again focused on Ontario Sire Stake races around the province, racing at tracks such as Clinton, Dresden, Flamboro, and Hanover. He didn’t run in Woodbine or Grand Circuit races but that was according to Johnston’s wishes. It is not uncommon for a good Ontario trotter to struggle against he best in North America. So when horses like Cheyenne Spur (winner Colonial Trot), King of the Sea (4th in the Hambletonian, 2nd in the Yonkers Trot), Peddler Yorktowne (3rd in the Stanley Dancer) and MB Elite came to challenge for the Canadian Trotting Classic, A Worthy Lad was up against better horses than ever before.

When Bud Fritz was asked for the highlight with A Worthy Lad, he always responded that every race was a highlight. But looking at it objectively, there can be no question that the highlight was his win in the Canadian Trotting Derby. The quality of the opposition was clearly better than in his other wins. Going to the lead and controlling things, he pulled away in the final stretch and although Cheyenne Spur had finished strongly he still won easily by a couple of lengths. And as always, you always got the impression that he could have gone a lot faster.

By now his undefeated streak had gotten the attention of potential buyers. In July there was serious interest from Sweden and a price of $1.5 million, subject to a satisfactory medical, was agreed. In the meantime the Worthy Bowl-son kept working away on his win streak. On Sept 29 he won his 29th consecutive win at Kawartha Downs, defeating Cam Fella’s previous record of 28, defeating future Elitlopp winner Billyjojimbob and setting a lifetime and track record of 1:57.3/1:13.0 in the process. (The record for consecutive wins is really a post WWII record, though, since Carty Nagle put together 41 straight win in 1937-38.)

The sale of A Worthy Lad was concluded at the end of September and he made his last start under the ownership of Joe Johnston on Sept 19, 1990 at Dresden, winning by five lengths in 2:00.4/1:15.0 – a new track record. When explaining the sale to Swedish horseman Bengt Pettersson, Johnston said that «It just got to the point that it was too much money to not have that security.» It is impossible to disagree with the logic.

Racing one final time in Canada at Mohawk on Oct 12 in an Ontario Sire Stakes race, he picked up his 30th win – in his 30th start, and he was then sent to Europe. Now in the training of Håkan Hellerstedt, he started the prestiguous Gran Premio Orsi Mangelli in Milan on November 1, 1990. In the elimination he suffered his first loss, finishing fourth behind Incredible DJ, Place Kicker and the Italian-born Mint di Jesolo. The final was even more disappointing as A Worthy Lad was unable to keep up with the front, finishing 6th of the 8 finalists, Antwerp Hanover winning (ahead of Place Kicker and Mint di Jesolo) and picking up the 155 000 euros.

After disappointing in yet another start, a thorough medical revealed a heart condition that forced him to be retired from racing. Retiring him to stud didn’t bother the owners. Naturally, there were high expectations: but for the Orsi Mangelli he had an excellent career, he had good conformation and a good, solid pedigree (his dam is the sister to Hambletonian winner Green Speed) yet provided some outcross. But even though A Worthy Lad sired dollar millionaire Hanko Angus the stars were few and far between. In Sweden he was awarded the AB rating, indicating he was nothing more than an average sire.

In the end, A Worthy Lad’s racing failure in Europe and at stud quickly pushed him way out of the limelight. Although his accomplishment was recognized when he was inducted into the Canadian Horse Racing Hall of Fame in 2010, he is forgotten by too many, though.