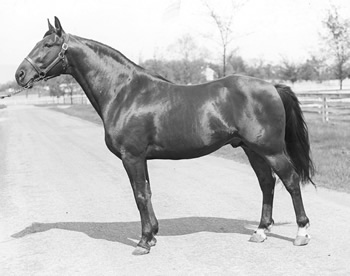 With a fantastic pedigree, much were expected of Calumet Chuck as he was by Truax and out of the fast Sumatra, 2:02 1/2. As soon as the two-year-olds of 1931 started trotting that July, Calumet Chuck immediately proved to be among the better in the crop, though he struggled to beat a few of the best in the beginning.

His career started with a third place finish (behind Brevere and Hollyrood Robin) at the Rainy Day stakes at North Randall. When the Grand Circuit moved to Kalamazoo he could only muster a fourth place in the group crop, the top two unchanged from North Randall but future Hambletonian winner The Marchioness now snuck her way ahead of Calumet Chuck in the final standings. At the Thorncliffe track in Toronto he first took second spot behind The Marchioness (with Brevere and Hollyrood Robin absent) while the second race there was won by Hollyrood Robin and Chuck in fourth behind his three nemeses. In the American Horse Breeder Junior Futurity he again had to settle for second place behind Brevere as the son of Peter the Brewer again proved too strong. Both the Good Time two-year-old trot and the Horse Review Futurity at Springfield, IL, proved similar as he had to settle for second and fourth, but as the Grand Circuit moved to Lexington, Chuck was steadily improving and coming into his prime. The Horse Review had hinted of things to come: even though The Marchioness proved the strongest, Calumet Chuck’s win in the second heat was in a season record 2:04 1/2.

As The Marchioness’ one-year older brother Protector won the 1931 Kentucky Futurity in what most saw as a foregone conclusion anyway, the Junior Kentucky Futurity was seen as a more open contest. The Marchioness had won the first heat with relative ease in 2:04 1/2. Maid McElwyn, who had broke in the first heat, won the second heat in a new world record 2:02 1/4 after taking the early lead and setting a fast tempo. Calumet Chuck was second to Maid McElwyn but lost by a length. In the first heat Maid McElwyn was again in the lead but Chuck came on strong and beat the filly in the last few strides in 2:04. The race-off between the three heat winners looked to belong to The Marchioness who took the early lead but Calumet Chuck again delivered his trademark strong finish and caught her a few yards from the wire to win in 2:08 1/4. The win set a new world record for four heats for two-year-olds.

William M Wright, the founder of Calumet Farm and director of the Hambletonian Society, died in 1931 and while Wright was a standardbred fan, his son Warren had a love for thoroughbreds and converted the Lexington farm to thoroughbreds. As a result, Warren Wright announced in late September that Calumet Chuck, with the rest of the Calumet-owned standardbreds (including Hambletonian winner Calumet Butler), would be sold at the Old Glory auction in New York that November. Calumet went on to become one of the most famous thoroughbred farms in the world.

At the auction it was expected that Calumet Chuck would be the most expensive. Few though he would fetch a price high enough to beat the auction record held by Legality, who had sold for $18000 to a German buyer the previous year. When Calumet Chuck entered the auction ring it quickly turned into a bidding war between Hanover Shoe Farms and TJ McKinney of Buffalo. Lawrence Sheppard surely wanted the excellent Hambletonian hopeful and stallion prospect but McKinney was prepared to pay big money for Chuck so the world record holder fetched a record $19500. (This was not the only big money transfer from Calumet to Hanover that year as they also paid $10000 for champion two-year-old pacer Calumet Cheater, later renamed Rip Hanover.) It would have fit in with the tradition at the time to rename Calumet Chuck, but for some reason Sheppard didn’t do what he had done with Mr. Watt (who became Dean Hanover) and McLin (who became McLin Hanover).

In the winter Chuck was rated third favorite at 5:1 for the upcoming Hambletonian behind Maid McElwyn (5:2) and The Lad (4:1). In the Matron Stakes at North Randall in June, Calumet Chuck finished third after being runner-up in all three heats, losing all three heats by a nose. In the Stallion stake at North Randall he finished fourth courtesy of a 2-3-2 heat record. When he was runner-up in all three heats of the Peninsular Farm State at Toledo in July, Calumet Chuck had the unenviable record of being 0-8-1 in his first 9 heats in 1932. As he finished 3-2-3 in three heats at Hartford, Calumet Chuck was only seen as an outside contender for the Hambletonian. The previous year Calumet Butler won only one race but that was the Hambletonian and when Chuck got post position 1 hopes improved that he would repeat the feat of his former stable mate. But Calumet Chuck was nowhere near glory as he finished 4-4-5 in the first three heats and when The Marchioness, Invader and Hollyrood Dennis went out for the final heat, the Hanover hopeful was already in the barn.

The Marchioness also proved an impossible proposition as Chuck had to settle for runner-up spots in both heats of the Illinois Futurity at Springfield and the story repeated itself in the Horseman Futurity and he rounded off the season winless after being runner-up to The Marchioness once again in the Kentucky Futurity.

Calumet Chuck was retired to stud at Hanover Shoe Farms and went on to produce some outstanding performers such as Nibble Hanover and Titan Hanover. His name is widely recognized and his daughters were sought-after broodmares. Yet, oddly enough, few know that he only won one race in his career, the 1931 Junior Kentucky Futurity. 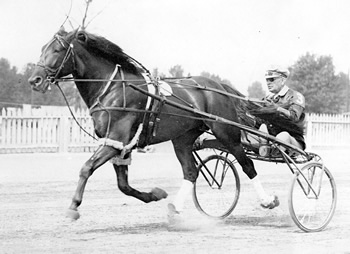