Roquepine – the queen of all queens 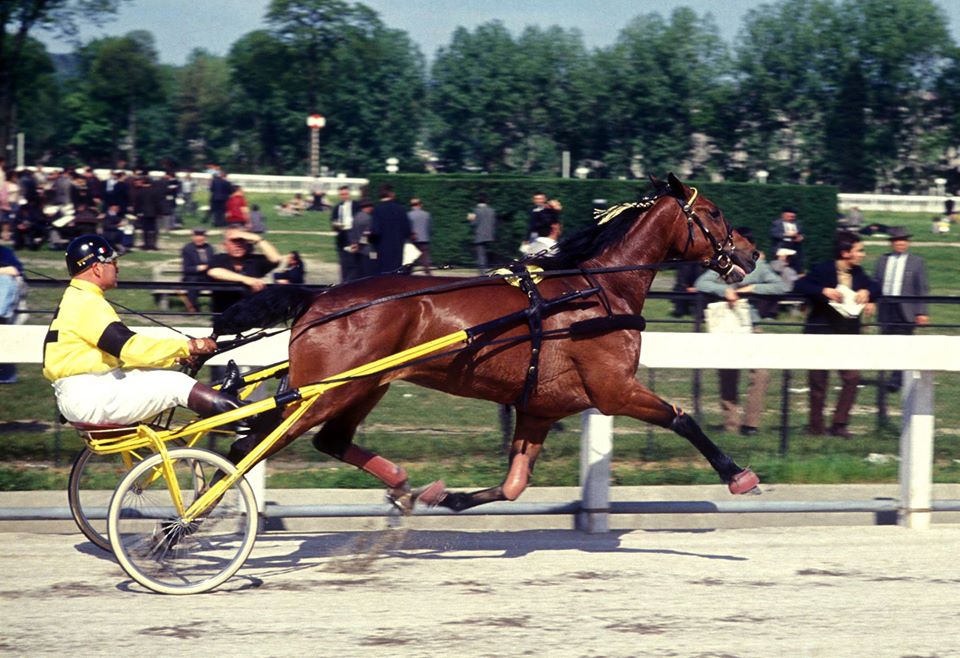 She was the undisputed queen, not only of French but world trotting, so superior that she was excluded from the betting in her 1967 Elitlopp elimination! Roquepine won races all over the world, at every track, distance and position. To top it off, she then gave birth to possibly the most influential stallion in French trotting history, Florestan.

Roquepine, bred by Henri Levesque and foaled on April 8 1961, comes from one of the best maternal families in France. She is a granddaughter of the fantastic broodmare Sa Bourbonnaise. She was the winner of 1944 Criterium des 4 ans, the 1945 Criterium des 5 ans and third in the 1947 Prix d’Amerique before becoming of the golden broodmares in the history of French trotting. Sa Bourbonnaise’s third foal, her first son, was Hermes D (by Kairos) who proved a very good stallion from 57 to 74. Her fourth foal, the mare Infante II (by Hernani III), the first French female 1:14 (below 2:01) trotter with three top-5 finishes in the Prix d’Amerique, became the dam of Sabi Pas, sire of Fakir du Vivier (who in turn is the paternal grandsire of Coktail Jet and great-grandsire of Love You). Levesque had identified Sa Bourbonnaise as an ideal broodmare and bought two of her daughters, Jalna IV and Glamour II.

Levesque did not stress Roquepine, who could be quite a headstrong filly, too much as a youngster. She debuted at 3. Levesque switched her to monte (RUS) the same year as he thought that was her strongest discipline. She was second in the group 1-race Prix de Vincennes that year, so clearly there was nothing wrong with her abilities. But Francois Brohier, her rider in that race, reported back to Levesque that the filly does not really tolerate a rider and should be switched back to sulky races. Levesque then teams up with the person he feels is ideal to handle his fickle and temperamental filly, Jean-Rene Gougeon. The next year Roquepine established herself as the dominant horse in the crop, winning the Criterium des 4 ans, Criterium Continental, Prix Octave Douesnel, Prix Guy le Gonidec and Prix Marcel Laurent. By doing so she also made herself the favourite for the upcoming Prix d’Amerique.

In the 1966 Prix d’Amerique Gougeon gave her a moderate start but soon enough the mare was outside of the leading Queronville LB. He refused to relinquished the lead, however, so Gougeon and Roquepine kept piling on the pressure. Eventually Queronville LB surrendered while Roquepine went on to win in a new track record. She barely managed to hold off a fast-closing Elma, though, who was a very impressive second. Totally dominating both at home and away that year, in France she also picked up wins in Prix de l’Etoile, Prix Doynel de Saint-Quentin, Prix Roederer, Prix Jockey, Prix d’Europe and the Criterium des 5 ans. The wins in the Prix d’Europe and Prix Jockey were somewhat special as they were only 48 hours apart (!)

A big star at home, her reputation outside of France would also skyrocket. Going to the Elitlopp in May, Roquepine took the easiest of wins. Parking herself outside the Swedish Xanthe in her elimination, Roquepine won comfortably. In the final she again ended up first over, this time outside Quioco driven by Jean Rene Gougeon’s brother Michel Marcel. Many thought it would be too difficult a task. (Interestingly enough, neither of these were the the favourite – that was instead the Gerhard Kruger-trained Cheer Honey, a daughter of Florican, who finished third. In fairness, at that time the Swedish crowd didn’t know Roquepine’s abilities yet – but they would never again underestimate her in the betting.) After applying pressure, at the top of the final stretch Roquepine had simply worn down Quioco and sped away to an easy win, winning in 1:15.3 / 2:01f. Roquepine also visited Copenhagen to win The Invitational trot (later known as Copenhagen Cup), and Italy to win the Gran Premio Delle Nazioni. Visiting the US in July she took part in the 1966 International Trot. There she met another mare in rich form, the Canadian Armbro Flight who took her 50th career win by a neck over a fast closing Roquepine, while Noble Victory finished third 8 lengths behind the two mares. Opening up a 5 length lead at the top of the stretch, Armbro Flight was saved by the finish line when Roquepine came at her. After the race, Jean-Rene Gougeon denied reports he had mistaken the finish line in the race and instead gave credit to Joe O’Brien for opening the five-length lead with a quick burst of speed. «That won the race. We needed 10 more meters» Gougeon said to media after the race. With Armbro Flight straining a ligament in her left hoof, there would be no revenge match in the Challenge Cup the following week. As Roquepine got ill the night before the race, both were eventually scratched.

A few months later, back for the United Nations Trot, Gougeon would not let himself be had by any smart tactical drives from other drives. When Noble Victory went to the lead, he immediately surged up outside and put pressure on him, forcing his mare into the lead with a lap to go. While Noble Victory faded and finished last, Roquepine held off Speedy Rodney to win comfortably.

In 1967 Henri Levesque wanted to taste Prix d’Amerique glory from the drivers seat and drove Roquepine to a one-length win ahead of Oscar RL, driven by his trainer Jean-Rene Gougeon. Continuing her complete dominance she also picked up wins in the Grand Criterium de Vitesse, the Prix de Bourgogne and the Prix de l’Atlantique.

She also kept up her road trips, travelling – and winning – widely across Europe and in the US. In the Elitlopp she was so superior that the Swedes actually excluded her from the betting in the elimination. Needless to say she won easily ahead of the Italian owned Lansing Hanover. The final would simply be more of the same as she had no problems holding off the Italian-trained trio Spin Speed, Lansing Hanover and Short Stop. In Italy she picked up wins in the Lotteria, Gran Premio Freccia d’Europa, Gran Premio Costa Azzurra and others. Roquepine was probably even more popular abroad than at home. She was not always very friendly and was reputed to be a handful. She did not have the charm and charisma of former trotting queen Ozo. That coupled with her sometimes unpleasant disposition meant she was not loved like the aforementioned fillies by the French public. She was, however, described as a dream trotter and on her foreign trips she rarely lost, usually winning with ease. She often had to do everything herself, being parked outside the leader or going third over if necessary. She was relatively fast out of the gate, though, and could also take the lead at times. According to Jean-Rene Gougeon she had no weaknesses.

Her win in the 1967 International Trot was controversial, though. Roquepine took the lead with stable-mate Oscar RL parked on the outside. The French duo slowed the pace down so much that many Americans felt it violated their unwritten rule about a certain speed, the elite group that competed in the this group never went at slow as this race with Roquepine winning in an embarrasingly slow 2:43.4/1:21.1 over 1 1/4 mile/2011 meters – many seconds slower than the second-slowest win in the race’s history. This win caused a lot of resentment and when there was contact between Fresh Yankee and Roquepine, Saners Russell, driver of Fresh Yankee, lodged the foul claim and contended that Roquepine had taken out from the rail and knocked his mare into a break just before the mile mark. Jim Dennis, driver of Perfect Freight who was sitting behind Fresh Yankee when the incident happened called it «the worst thing I ever saw when the French mare came out into Fresh Yankee.» Based on this and marks found on Fresh Yankee, the judges disqualified Roquepine. It would be the first time in 31 races that Roquepine finished outside the top two.

In 1968, Jean-Rene Gougeon again drove Roquepine in the Prix d’Amerique. Taking her third consecutive win, something only 4 greats have managed in the race’s history so far. After the race Gougeon stated that «I didn’t need to do anytning, she was much better than the rest.» Winning the Prix de l’Atlantique and the Grand Vitesse for a second time, she was still the top trotter at home and she now she spent even more time in Italy, winning Gran Premio Delle Nazioni, Gran Premio Freccia d’Europa and several other top races. But her dominance was challenged heavily by a wave of younger challenges including Tidalium Pelo, Tony M – and soon this wave was joined by the even younger Une de Mai (who was 4 in 1968). Roquepine also won the International Trot, avoiding the controversy that dogged her the previous year. Letting the Swedish trotter Kentucky Fibber dictate the pace, Jean-Rene Gougeon instead used Roquepine’s speed in the final stretch to win by one length.

Going into the 1969 Prix d’Amerique there were high hopes that she would be the first – and only – horse to win four straight Prix d’Amerique but several years of competing at the top had started to take its toll and Roquepine could only manage a seventh place. The winner was Upsalin, driven by Louis Sauve but owned and trained by Henri Levesque who thus «kept it in the family.» Realizing she was past her best, Levesque saw no point in Roquepine racing and she was retired later that year.

At stud she would only have 4 foals but she went on to become an immensely influential broodmare. Levesque had a great belief in the power of the Franco-American cross and wanted to use an American stallion on Roquepine. The French association made it clear no such foal would ever be registered in the French studbook, yet Levesque followed his instincts. In 1970 the best French mare in history (sorry Uranie, Amazone B and Ozo!) was bred to the best US stallion, Star’s Pride. The following year the colt Florestan was born at Hanover Shoe Farms where Roquepine was stabled as a broodmare in the US. Florestan would leave a massive legacy at stud and is by many considered the most influential stallion in French, maybe European, hell maybe even world, trotting! She was bred to Ayres and taken home to Europe and delivering another colt named Granit. Back in France she had two more foals before passing away in 1975, only 14 years old, after birth complications.

Picture 1 (and possibly 5 and 6): previously posted by Björn Hammarström. Taken by Einar Andersson.

Picture 4: Roquepine to be bred by French champion stallion Kerjacques. For the life of me I cannot remember who took these pictures but it was somebody in Sweden who graciously shared them with me several years ago. 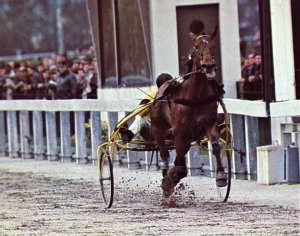 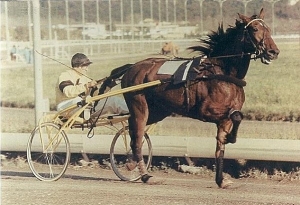 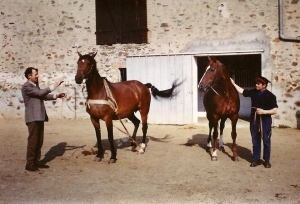 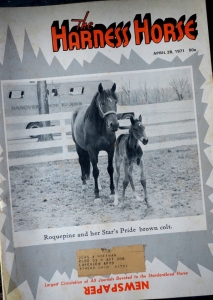 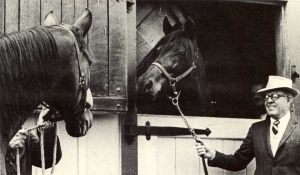