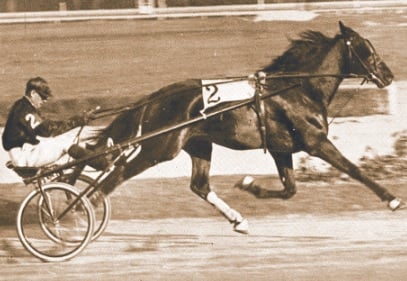 Between the two world wars, much great bloodstock was imported to Europe, primarily Italy and Germany. Both attractive stallions and broodmares were in high demand. At the forefront of Italian importers was count Orsi Mangelli, a name pretty much synonymous with Italian trotting. (Technically it’s Paolo Orsi Mangelli but Orsi Mangelli is ofte used)

After acquiring his farm from Alberto Chantre, the first crop bred by Mangelli saw the light of day at his «Le Budrie» in 1931. Two years prior Mangelli had bought the top four-year-old German trotter Augias as a stallion. The Italian entrepreneur wasn’t happy to just dabble a bit in the breeding business. He had the resources to buy some of the best and set out to do exactly that. Some of the best stallions in the world ended up at his farm in Italy. The 1930s saw him buy Truax from Calumet Farm, world champion and 1934 Transylvania Trot winner Prince Hall and in turn his sire The Laurel Hall (also sire of Walter Dear) before he toward the end of the decade purchased De Sota, winner of the 1938 and 1939 Prix d’Amerique and then gladly shelled out $25000 for Hambletonian-winner McLin Hanover (and according to Dean Hoffman’s book, Lawrence Sheppard was probably equally happy getting rid of a horse so talented it would probably easily have wiped out Dean Hanover’s records.)

But Orsi Mangelli wasn’t just interested in great stallions, he also wanted the best broodmares money could buy. Some of the mares imported to his farm near Bologna in the 1930s include The Marchioness and her full sister The Duchess (the latter dam of three Italian stakes winners), Calumet Clancy (dam of multiple stakes winner Inverno and Filibustiere, mentioned below), Emily Stokes (herself 4th in the 1934 Hambletonian and dam of the Gran Premio Nazionale winner Rivale). Though he was usually focused on acquiring the best American bloodlines, he didn’t completely overlook French trotting. He imported Judith (b 1931) and bred her to Truax, then the resulting daughter to Inverno to produce the good mare Taggia. Taggia’s great legacy to Italian trotting is her son Crevalcore, a fantastic chestnut trotter who had many great duels with Tornese. Crevalcore’s performance in the 1960 International Trot, where he lost a lot of ground early, was nothing short of spectacular.

Another mare imported by Orsi Mangelli was Alma Lee. Purchased as the 9-nine-year in 1934, her first to foals hadn’t shown much by then but Mangelli liked Alma Lee’s own on-track performances as well as her excellent maternal pedigree. But Alma Lee hadn’t spent much time in Italy before news came of her second daughter, Warwell Worthy, finishing second to Greyhound in the 1935 Hambletonian. (She would later produce Worthy Boy as well) while her third daughter, a year younger, won the 1935 Junior Kentucky Futurity and Tompkins-Geers. That filly was of course the magnificent Rosalind. I’m sure the Americans regretted selling her by this time! The same year she was bred to The Laurel Hall and the following year Floridoro was born. (Mangelli used the alphabet system for his products, the 1931 crop all starting with the letter «A», the 1932 crop with the letter «B» etc – when Italian trotting as a whole adopted this rule, starting 1978, it was based on Mangelli’s rules and the 19 characters he used.)

At 3, Floridoro won the Derby, Gran Premio Citta di Napoli, Gran Premio Tito Giovanardi and Gran Premio Italia. The following year he added the Gran Premio d’Europa (again with Filibustiere in second place). But as Floridoro was getting good, Italy was rushing head first into WWII and even though there was trotting almost continuously through the war it set Floridoro back and his career never became what it promised. After the war he didn’t get too many opportunities at stud either and in 1951 he was exported to Australia where he produced a few good trotters from what I can see.

A tiny bit of Floridoro lives on in many of today’s top trotters, though. His daughter Heluan produced the good Oriolo – both damsire of Agaunar and damsiresire of Lemon Dra. Through the former Floridoro is in the pedigree of every horse with Viking’s Way (Ready Cash, Timoko, Jag de Bellouet, etc) in the pedigree, and Lemon Dra, one of the best sires in Italian history, is everywhere in Italian pedigrees today.