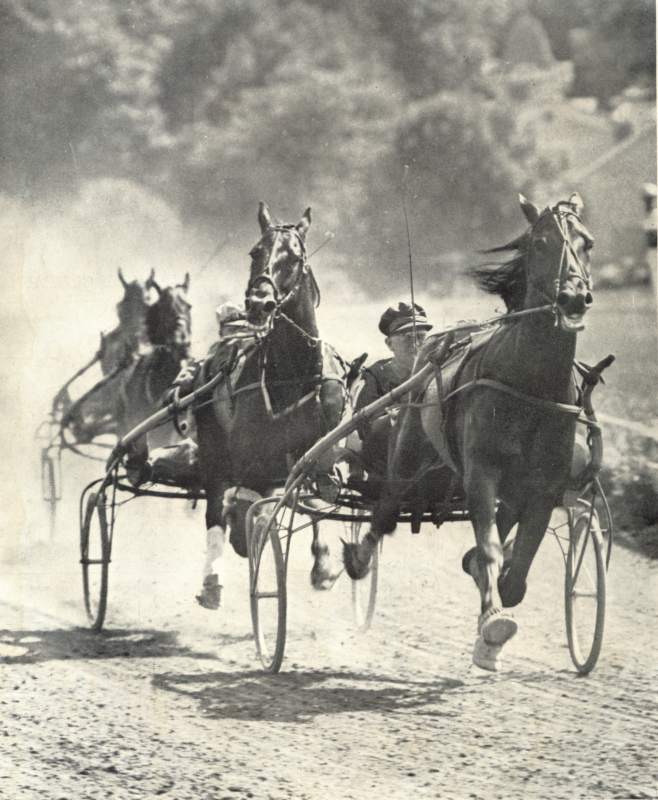 In 1932, the two-year-old Calumet Delco was a superstar. The son of Peter the Brewer and Dillcisco won all 10 races at two and was particularly impressive on half-mile tracks. He set three world records along the way. The following year, at 3, he posted a 2:04 record and won the Review Futurity (Review Stakes) and the Historic Dickerson Cup. He was absent from the Hambletonian, but just like Protector two years earlier he simply wasn’t eligible as payments had not been made. He was clearly one of the better in the crop although he had Like many good horses at the time, he was sold to Europe at 4. But while the majority of the better horses at the time went to Italy (like Muscletone, Tara, The Marchioness, McLin Hanover, DeSota and Prince Hall) and Germany (Walter Dear, Calumet Butler, Vitamine and Ethelinda), Calumet Delco’s owner FB Luchsinger sold the trotter to France.

In France Calumet Delco blossomed in the care of Henri Masson. In the Milwaukee Journal on Nov 6, 1934 they provided an update on the former Wisconsinite: «Calumet Delco, Wisconsin’s champion trotter of 1933, is the toast of French harness racing fans. FB Luchsinger Monroe, who sold the colt to European buyers, has received word from Henri Masson, now racing the horse, that Delco has won five times and placed second three times in eight races on French soil (…)»

In total he won 24 times in France and was one of the better aged horses at the time. He managed a fifth-place finish in the 1938 Prix d’Amerique although he wasn’t entirely at home on the demanding Vincennes track, which back then had an a steeper uphill climb on the backstretch. His most famous race in France is probably the 1937 Grand Prix de la Ville de Nice where he was given a 100 meters handicap in the 2500 meter long race (1 9/16 mile), yet ended up losing by only a nose, and setting his French record of 1.21,4 / 2:11 in the process.

But it wasn’t his prowess on the track which has made Calumet Delco one of the most mythical horses in trotting folklore. Calumet Delco is famous for his part-time job. The part-time job that he, on the one hand, didn’t have, yet on the other hand it is officially acknowledged that he had. Confused? Read on…

Before going to the actual story, in 1937 France closed its stud-book. This meant that to be registered in the national studbook, both parents had to be in the national studbook. One could no longer import horses from abroad. Some US-born stallions who had already been in France for many years were permitted to continue to do so, most notably Sam Williams, but for Calumet Delco this effectively closed the door – for all eternity – to him standing stud in France. And with that in mind…

In addition to racing, Calumet Delco had a «part-time job» working as a «souffleur» at the Haras de Ginai. Calumet Delco’s duty was to prepare (or warm up, if you will) broodmares for the stallion Gäel who was standing stud there. Gäel was a relatively popular French stallion who at 3 had won the Prix de Vincennes and at 4 the Prix du Président de la République, both prestiguous group 1 races. A popular stallion from the age of 4, Gäel produced some nice horses like Odoacre (the paternal grandsire of Jamin) and Messidor, winner of the Matadoren-Rennen (as told in the story about Big Noon posted yesterday).

Gäel had, however, fertility problems from the beginning, and From early on it was suspected that Calumet Delco did more than merely «prepare» the broodmares. In fact, it was openly claimed by some that Calumet Delco must have been the sire of a few of Gäel’s foals. Albert Veslard, owner of Haras de Ginai and Gäel, vehemently denied the accusations but failed to convince anybody. The claims simply did not go away and people were openly talking about the Calumet Delco line in French breeding. The French trotting association, on the other hand, categorically rejected that there was anything wrong with the official studbook.

In 1992 Rene Veslard, son of Albert Veslard, for the first time admitted publicly what everybody knew. According to Veslard, mares owned by his father that were supposedly bred by Gael in 1937 were in fact all bred by Calumet Delco. The foals were registered with Gäel as sire, though, because the French stud book was closed and the foals simply could not be registered with Calumet Delco as sire. A simple mistake could probably have been forgiven and registered, but this blatant disregard for the rules was impossible to explain away – hence they had to register all foals as those of Gäel. What makes this particularly interesting is that the 1938 crop which on paper is by Gäel is very strong. It contains the Prix de Paris-winning mare Quinauderie as well as we find Quiroga II and Quiproquo II (winner of the 1941 Criterium des 3 ans). The latter two both became influential stallions. The French association, though, have never changed any of the records, presumably viewing the confession as fake news, as Gäel is still registered as the official sire.

If anybody paid any attention it wasn’t exactly hard to find concrete proof long before 1992.

There is clear physical evidence in the form of color genetics to prove that Gäel cannot be the sire of all of his registered 1938 foals. Calumet Delco is bay brown, while Gäel is chestnut red. Most foals were bay or brown. One clear evidence, however, is the colt Quaker H, officially by Gäel and Idalie B. Gäel and Idalie B were both red. Genetically two chestnuts cannot produce a bay or brown foal. Quaker H, however, was brown. Calumet Delco was, like most US horses, bay. Case closed, when you think about it. Of course, that doesn’t prove that Calumet Delco was the sire but it clearly proves that Gäel had nothing to do with it.

Then toss in the best trotter from the 1938 mentioned, namely the trotter Quiproquo II. What exactly is the meaning of the word «Quiproquo» anyway? Well, it means mistake, misunderstanding or … mistaken identity. With hindsight it seems almost bizzare that such a name was selected given the circumstances.

It should be pointed out that Veslard’s confession was for the 1938 crop only. There have been those who have suggested that almost all of Gäels crops really were by Calumet Delco but that simply isn’t the case. Most importantly, prior to the studbook closing of 1937, there was no need to specify a dummy sire. Prior to 1937, Calumet Delco could legally have stood stud in France.

Veslard would later use Quiroga II or Quiproquo II on daughters of Gäel. If one only looks at the pedigree on paper, this looks absolutely ridiculous as the foals would be 2×2 inbred on Gäel. But Veslard knew the truth, that since the two stallions weren’t really by Gäel – and instead by Calumet Delco, there was no inbreeding to worry about. The most notably such horse is probably Chambon, a son of Quiproquo II and Nomarchie, a daughter of Gäel born 1935. Chambon won the Criterium des 4 ans in 1950 and the next two editions of Prix d’Amerique he finished third in both. Chambon is in turn the damsire of Alexis III, the sire of Ideal du Gazeau. Quiroga II’s son Index is the damsire of Chambon P, French champion stallion on numerous occasions. Calumet Delco is as such found in most French pedigrees.

That Calumet Delco was a great sire should not be surprising to anybody. He had shown real class at 2 and had an impeccable pedigree. His sire was a top sire and his dam, Dillcisco, was herself a good trotter. His sister Stardrift was, like him, a world champion on half-mile track. Stardrift is, however, of course best known as the dam of Star’s Pride. To further illustrate the strength of his pedigree, he is also the full sister of Josephine Brewer, the maternal 4th dam of Arnie Almahurst. According to an article in Bulletin 139 of the French breeding association GAET, Rene Veslard further stated that «if he had a lot of foals, Calumet Delco would become a leading sire. It was a nice horse, with the right type and size. He was above all, a golden character, being brave and obedient.»

During the war Calumet Delco was «borrowed» by the Germans (i.e. kidnapped) and served as a sire there between 1941 and 1948, and again after 1952. Here he sired the very good German trotter Ejadon, with whom Johannes Frömming won many races. As Rene Veslard said «I know he returned to the [Haras de] Ginai but that is a different story.» In fact, it may just be the same story all over as Calumet Delco is rumored to be the sire of several French horses born 1952, including Isard du Padoueng. Haras de Ginai is the current home of Fabrice Souloy and one of the stables there is named for Calumet Delco.

ps! Oddly (or maybe I should say «funnily») enough, one of Calumet Delco’s compatriots in the US crop of 1930 also served as a «souffleur» in Europe – I will see if I can put that story together sometime this week. 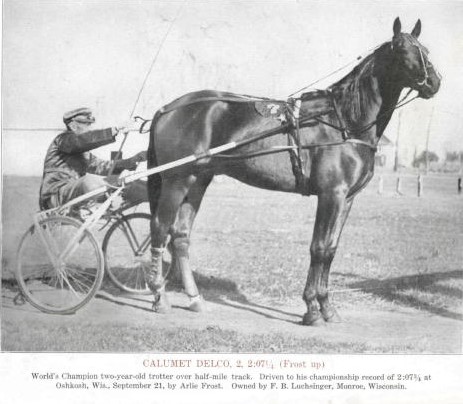