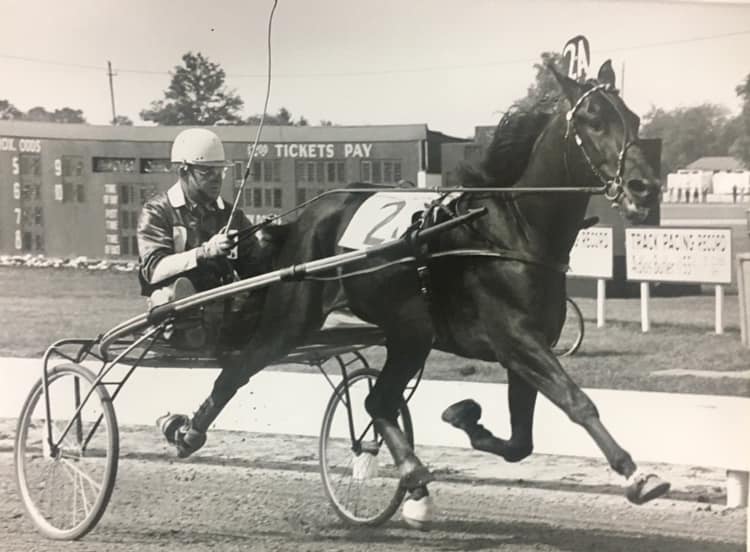 The third horse to win the trotting’s Triple Crown, Ayres, was always an immense talent but at 2 there were serious question marks surrounding his immense talent; would it be harnessed properly or would he go into history as another could-have-been who fell pray to bad manners? Despite setting a rather extreme world record at two, Ayres had a mind of his own and had serious issues with authority.

Even early at 2, Ayres was good though a bit inconsistent. That year the crop was dominated by Speedy Count but Ayres managed to beat him at times and certainly showed massive potential. In the Ohio Standardbred Futurity in September, Ayres finished 13 lengths ahead of the field and demolished the new world record for two-year-old trotters on a half-mile track. The old record stood at 2:03 1/2 but Ayres lowered it to a fantastic 2:00.1. Yet, while the crowd gave Ayres a standing ovation, driver John F Simpson Sr felt like killing the horse. Speaking to the jounalist Roy McHugh, Simpson noted that «Ayres set that record on his own. I was trying to take him back. I wanted him to conserve some of that energy for the second and third heats, but no. He went right to the front and took the bit in his mouth. He was like a runaway horse.» So at the start of the second heat, Simpson braced his feet, hugged the reins to his chest and pulled, determined to show the horse who really was the boss. Not that the son of Star’s Pride cared much. In fact, Ayres sped the first half-mile even faster than he had in the heat before. But after such an exhaustive effort the trotter broke stride and the heat was won by Smart Rodney and Billy Haughton. This necessitates a race off where Ayres complete lack of manners surfaced. After the first turn, Ayres flat out quit and turned into the stable area completely on his own despite Simpson’s tugging and whipping.

The performance earned Ayres a reputation for being a juvenile delinquent. Blazingly fast but with terrible manners. Simpson knew, however, that Ayres had enormous potential and his primary task for the winter training was finding the best way to teach the horse how to behave and take orders. To teach the independent-minded colt, Simpson surrounded him with other horses in training and gradually begun to get control over the anxious youngster. «I trained him with one horse in front of him and one on the outside and one right behind. I made him train in a box and he had to stay in that box whether he wanted to or not. Del Miller told me <make him stay there until he gets the idea>.»

Despite having set a very impressive world record, going into the 1964 Speedy Count was generally seen as the clear Hambletonian favorite on the back of 21 wins in 27 starts in 1963. In the balloting for horse-of-the-year honors, Speedy Count received 129 votes while Smart Rodney outpolled Ayres 23-13.

When he returned from winter training it was clear, however, that Ayres had got the idea. The juvenile delinquent was gone and a reformed trotter stepped onto the track. In his first race as a three-year-old, in the one-mile open trot at The Meadows, Ayres won comfortably in 2:03.1. He was controllable and did not attempt to run away. After the race, Simpson had a good feeling. Ayres lost to the older Marco Hanover in a 2:01.1 race at Sportsman’s Park in Chicago on July 4 but after that there was no stopping him. In the Yonkers Trot he lowered the race record from 2:03 to 2:01.3 and had no problems defeating Speedy Count.

When the Hambletonian came around Ayres was a massive favorite and he did not disappoint. In fact, he won in extremely convincing fashion but not without its special moments. First off there was the start. Ayres got in a few extra hippity hops and broke stride. Turns out his imagination was to blame. Television crews had strung a cable across the starting line in order to feed power to cameras at the judging stand. The strand cast a shadow and it spooked the horse. It hadn’t been thre the prior day and Ayres remembered. Each time Ayres got to the line, he jumped. When Simpson got Ayres trotting again he sat fifth in the nine horse field. When he attacked with a quarter to go, he shifted into overdrive and passed the pack, winning comfortably by a length in reocrd time 1:56.4. In the second heat Ayres stayed trotting but relinquished the lead to Speedy Count at the quarter. Attacking at the three-quarter pole, Ayres managed to hold off Big John to win by a neck.

The only hiccup of the season came in the Dexter Cup at Roosevelt when Dartmouth defeated him by a nose and won in a world record time. Ayres had went off stride for just a few steps right in front of the wire and that mistake had cost him the race. Ayres later completed the Triple Crown by winning the Kentucky Futurity in two straight heats. Simpson used the same tactics in both heats, staying off the pace and then charging to the front in the turn for home. In the first heat he just trotted away from the rest to a two lengths win in 1:58.1. He was pushed hard by Dartmouth in the second but prevailed in a photo-finish, winning in 1:59.2. Simpson and Sheppard had some concerns prior to the Kentucky win, though, as Simpson charged that «someone turned Ayres loose in the stable area Thursday night» and that the colt had suffered a scraped and bruised ankle. Lawrence Sheppard even offered a $5000 reward for the arrest and conviction of the person who tampered with the horse or its stall. But regardless of what happened, in the race Ayres seemed none the worse.

Ayres was named by his breeder Charlotte Sheppard. Her husband’s (Lawrence Sheppard) mother had earlier built a beautiful home in Accomac, Virginia and named it Ayres Lea (or Lee). He stood stud at Hanover Shoe Farms and produced Hambletonian winning full brothers Christopher T and Timothy T. Ayres died and was buried at Hanover Shoe Farms on January 30, 1990, at age 29.