Jorky– not to be messed with 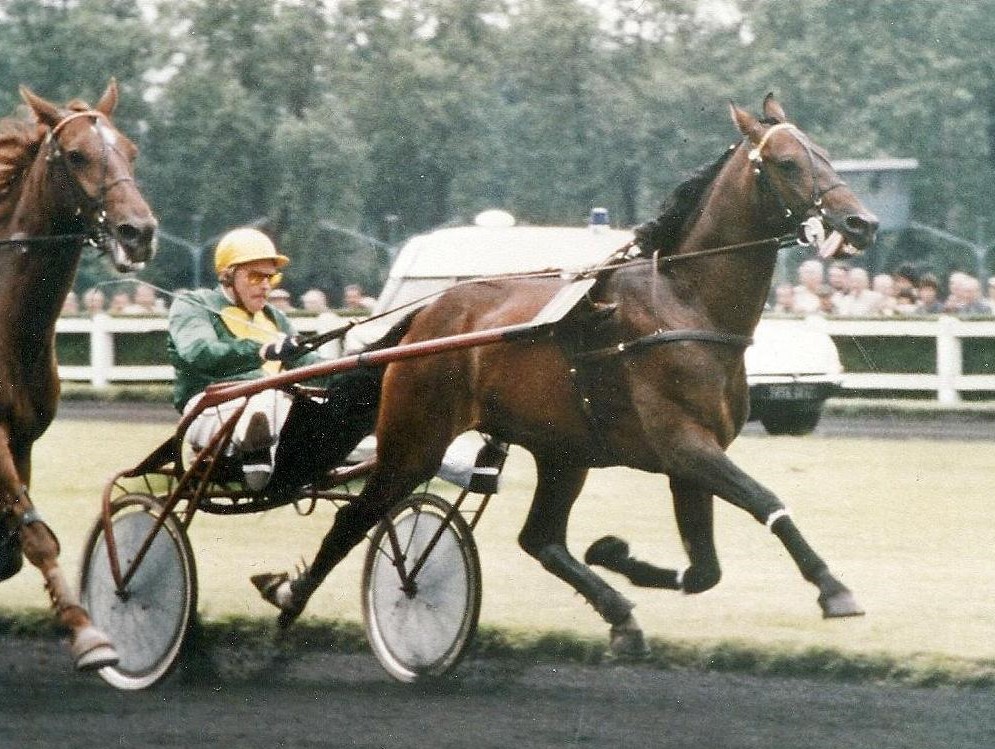 The 1981 Elitlopp saw a first, namely the victor being led to the winners’ circle in chains securely held in place not by 1, but by 2 grooms. French trotter Jorky had spent most of the warm-up kicking away at Leopold Verroken, his driver who coolly ignored his antics, but come race time he was the consummate professional. Although losing narrowly by a nose to Burgomeister and Billy Haughton in the elimination, it was under no urging from Verroken and it obvious that he could have won had he been pushed a little bit. In the final Verroken parked his temperamental colt outside the leader and controlled everything before leading the rest of the field in the final stretch, winning by 2 lengths in 1.57.4f. French horses are generally known to be tough and Jorky had made it clear in the warm-up that he was not Mr. Nice Guy – but the sight of an Elitlopp winner in chains in the winners’ circle still surprised some people. But as was abundantly clear, Jorky was not a horse to be messed with.

Jorky’s career had started 3 years earlier in rather bizarre fashion. Making his debut on Apr 3, 1978 in the Prix Enif, he was driven by Serge Chavatte was not having his best day. After one lap, Jorky went to the lead then loses his opponents in the turn. When passing the post for the second time, Serge Chavatte stopped his horse, as if the race was over. You guessed it. It wasn’t over. The rest caught up to Jorky and Serge Chavatte, realizing his embarrassing mistake, got Jorky going again but he only managed to finish seventh. Still, he had shown class and from then on he was top of the crop. To date, Jorky is the only French trotter in history to win all of the big three Criteriums (Criterium des 3 ans, 4 ans & 5 ans) for 3, 4 and 5 year olds.

Jorky competed – and often won – all over Europe (his wins include the Elitlopp, Preis der Besten x3, Gran Premio Delle Nazioni, Grote Prijs der Lage Landen x2, Elite-Rennen and Copenhagen Cup) and also the US (Challenger Cup) in addition to several top races in France. (He failed in the 1981 International Trot, though) and had many memorable matchups with Ideal du Gazeau.

That he became a huge star was no surprise given his pedigree. Out of the French champion stallion Kerjacques, his dam Vanina B was one of the top trotters in France in the early 70s. In 1970 she won 11 of 12 races including some of the biggest races for the 1965 crop and she also held the track record at Vincennes. When the 1971 Prix d’Amerique came, she had 10 consecutive wins to her name and had just won the Prix de Bourgogne ahead of Une de Mai. She wound up second behind Tidalium Pelo, who won in a new race record time, but ahead of Une de Mai who finished third. She got her revenge the following week when she beat the same opponents to win the Prix de France and she won several other bigger races before an injury sidelined her for a long time. She returned to the track but not at the same level although two years later, when Dart Hanover won the Prix d’Amerique, Vanina B finished a respectable fifth. Vanina B herself is the daughter of Carioca II out of La Coulonces, a very interesting French mare.

La Coulonces became one of the fastest horses in Europe when she won the Criterium International in 1.15.9 / 2:02.1 at Enghien. She also finished second and was a major part of the infamous 1962 edition of Grand Criterium at Cagnes-sur-Mer where Roger Vercruysse, the driver of Kracovie, completely lost his head and took the law in his own hands after an incident in the final turn. In the end, only police intervention *on the track* rescued him from furious Italian fans who were literally ready to lynch him. La Coulonces is the full brother to Remember, a horse that never really did anything on the track that anyone can remembers (pun intended) but who people nonetheless will remember as the damsire of Ourasi. She was later shipped to the US where she started in a pacing race at Yonkers (!) on Oct 22, 1962, finishing fourth behind winner Career Boy – to my knowledge the only French-born horse to do so.

Vanina B had a very tough temper that she passed on to Jorky. That she did so has later been described as a miracle of nature. As the undisputed champion stallion, Kerjacques was extremely popular and every year 60 broodmares were selected from around 400 applicants. But not all had to apply. A few exceptional mares also got a spot and Vanina B got such a spot in 74, 75 and 76. In 1975 Jorky was born but in subsequent years Vanina got in foal but miscarried. An blood analysis showed that Vanina and Kerjacques were not compatible and that she developed anti-bodies that forced the miscarriage (a veterinarian can explain this a lot better and detailed than me). After that discovery she was never bred to Kerjacques again. Additionally, La Coulonces had both fertility issues and bad luck (e.g. twice delivering twins that both died) so she only produced 3 foals in 14 years, unfortunately Vanina B seemed to have some fertility issues too and she only produced 6 foals.

In 1987, after 13 breeding seasons, Vanina B had only produced 4 foals. Her owner (and breeder) Bernard Billard did something very unusual: he applied to the French association for special permission to use Embryo transfer. The French association granted the application and on September 25th, a daughter, Allez Coulonces, by Lutin d’Isigny, was born. Born so late in the year she was not raced but immediately became a broodmare. Not suffering from any fertility issues, she produced 14 foals. One of her foals, the daughter Kiss Me Coulonces (by And Arifant) was initially kept by Billard but auctioned off in October 2005 while in foal to Jardy. Not generating too much interest, the Dutchman Paul van Klaveren bought her for 11 500 euros. The following spring she gave birth to 1:59 trotter Scoop Star and van Klaveren then bred her to his own stallion, Imoko, a stallion that was not considered very fashionable at the time, to produce Timoko.

Jorky died quite young, at the age of 14, from a stomach rupture on 29 March 1989. He stood stud for the first time in 1982 and even though he also had some fertility issues, not producing too many foals, he was also a very average sire (at best) and at the time of his death he was not attracting that many broodmares. Given his fantastic pedigree and even more fantastic career he had been considered one of those few «can’t miss» prospects as a stallion. That he wasn’t has probably tarnished his racing legacy a bit, too. This is a shame, though, because Jorky was one of the best in the world in his time. Of course, the same can not be said for his temper. Be it on or off the track, nobody messed with Jorky.